The Emini reversed up from below yesterday’s low, but the bulls have not yet done enough to make the market clearly Always In Long. The selloff and the rally so far lack consecutive strong trend bars. Yesterday was a triangle. Today’s trading range price action is a continuation of yesterday’s. Until there is a strong breakout up or down, traders will scalp, and many will enter with limit orders, selling above bars and prior highs and buying below bars and prior lows. Both bull and bear scalpers have had several opportunities to make money today. This is a trading range open, and it increases the chances that the 1st swing will only last 1 – 3 hours, and then be followed by an opposite swing, creating a possible trading range day.

Pre-Open Market Analysis
S&P 500 Emini: Learn how to trade when the price action forms a triangle

The Emini has been in a trading range for a month, and the past 2 days were dojis in the middle of the range. Monday’s high of 1940 was a couple of ticks above the 50% pullback from the January selloff. The Emini did not test back there, which it usually does. Whether or not the Emini trades down for another day or two, the odds are that it will test that 1940 level again within the next several days. This means that the downside is probably limited for a few days. If instead it breaks strongly below this week’s low, it might instead test the January low. If it breaks below the January low, which it probably will within the next month, it would then probably quickly reach support on the monthly chart between 1500 and 1700.

The Emini is down about 10 points with 40 minutes to go before the open of the NYSE. On the 60 minute chart, the bears want yesterday’s reversal down to be the start of a selloff from the right shoulder of a head and shoulders top. The neck line is Tuesday’s low around 1806. The bulls want any selloff to be a pullback from Tuesday’s rally at that level. They see the 60 minute chart as having a double bottom, and they see yesterday’s selloff as a pullback from Wednesday’s breakout above that bottom. Whenever the market has credible buy and sell signals, it is in a trading range, and the probability of the two outcomes is about the same. The daily chart is in a bear flag, but that selloff from the 50% pullback was so abrupt that it will probably have to get tested again, especially since the selloff has not been strong.

With the Emini in the middle of a month long trading range, and with the range being tight for 2 days (a triangle on the 60 minute chart), the odds favor more trading range price action today. Those who trade the markets for a living are always ready for anything. If there is a strong breakout up or down, they will swing trade, even if they believe the swing will end up as a leg within a big trading range.

I have been writing for the past 2 months that the odds favored a 2nd leg up on the daily chart of the EURUSD after the December 3 bull trend reversal, despite so many experts saying it would fall. Yesterday was the 2nd day of a two day strong bull breakout. It reached a leg 1 = leg 2 measured move and it also reached my target of a measured move base on the height of the 2 month trading range. Bulls will begin to take profits. Bears will begin to sell for scalps.

While it is possible the the breakout immediately fails and reverses, it is more likely that the 1st reversal down on the daily chart will only last a day or two and it will then be bought. Bear scalpers will take profits and bulls will buy for at least one more small leg up. No one knows what will happen once the trend back up resumes. The bulls want a rally to above the October 15 lower high just above 1.1500, and especially above the August 15 high just above 1.1700. If they get it, traders will believe that the yearlong trading range has ended and a bull swing has begun. Without that bull breakout, traders will see any rally as simply a leg within the trading range.

Over the past hour, the EURUSD reversed down strongly from a new high in the bull breakout, and this might be the start of the pullback from the bull breakout. It is about 50 pips above the 60 minute bull flag that formed on Wednesday, and it might have to test that level before it can have its 2nd leg up on the daily chart. Since bulls are taking profits and bears are scalping, and both believe there are buyers below at support, the EURUSD will probably go sideways in a 200 pip trading range for a few days. The swings up and down will probably be big enough for 20 pip scalps and 50 pip swings on the 5 minute chart. 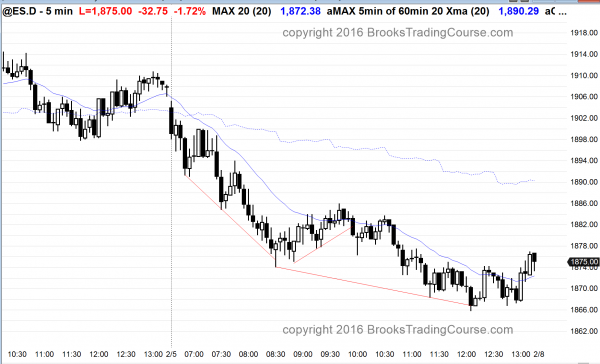 The Emini sold off for 2 hours, entered a trading range, and then had trend resumption down.

Even though today was a bear trend day, bulls made money buying below every prior low. This is more common when a bear trend is a leg in a bigger trading range. The Emini is testing the neck line of the 60 minute head and shoulders top. There is a 40% chance of a measured move down, and a 60% chance of a failed bear breakout and then more sideways or a test back up to the 50% pullback level at the top of the trading range. Monday has the potential to gap down or up because the Emini is at the bottom of a 2 week trading range, and in the middle of a larger trading range with targets far below and far above.