The Emini tested down to just above the moving average, and then reversed up to form an opening reversal. When an opening reversal comes just above the moving average, it is more likely to not lead to a rally. Also, yesterday is a buy signal on the daily chart, but it is a weak bar. This so far does not look like the start of a big rally. The bulls need a better buy setup, like maybe a double bottom of the moving average with the 2nd low actually reaching the average. They then need a strong breakout above yesterday’s high and then above the 60 minute moving average. The odds are that they will not accomplish all of this over the next hour, and therefore an early trading range is more likely. The Emini is in breakout mode.

The bears want a reversal down from yesterday’s high and an early high of the day. They, too, need a strong breakout.

At the moment, this is a trading range open, and today will probably have at least one swing up and one swing down. It might have to get above yesterday’s high before the swing down begins. So far, day traders are scalping until there is a strong breakout. If there is a weak breakout, they will be ready to bet on a failure and then an opposite swing.

The Emini’s daily chart as a 2 legged, 7 bar correction that is testing the middle of the April Final Flag. Although the past 2 days were strongly bearish on the 5 minute chart, they had small bear bodies and prominent tails below on the daily chart. They look more like bars in a bull flag than in a new bear trend.

After the April 20 new all-time high, the Emini never quite got back to the July high. If the Emini is putting in a major top, it would be unusual for it to do so without touching that resistance at least one more time. This means that the odds favor at least one more test up. It sometimes takes 20 or more bars to get there, but the odds are that it will.

The weekly chart had a bear breakout below an 11 bar bull micro channel. The odds are that the strong bulls who created the micro channel will buy this 1st pullback and that there will be at least a 2 – 3 week move up to and probably above last week’s high before the bears will be able to create a trading range. There is still about a 30% chance of a strong breakout above the 2 year trading range and a measured move up.

The Emini has been mostly sideways for over a month, and most days have had swings up and down This means that there has been a lot of trading range trading on the 5 minute chart. Until this pattern clearly ends, the odds are that it will continue.

The bear breakout last week on the 60 minute chart was strong enough to make at least one more test down likely. However, it still formed a higher low and there was a 2nd entry buy on Friday (a double bottom on the 5 minute chart). In trading ranges, probabilities stay mostly in the 45 – 55% range. Nothing ever seems as certain as traders want. The most certain thing is that the trading range price action will continue. This means that both bulls and bears are confident that moves up and down will not go too far before reversing. Traders tend to be faster to take profits. They look to buy low and sell high. Their behavior perpetuates the trading range trading.

Since both a swing up and a swing down are likely, traders will look for both buy and sell setups, and for strong reversals. They will also be careful of possible 2nd leg traps. There will often be a leg, a pullback, and then an even stronger 2nd leg. If the context was good for a trend, traders would bet that the 2nd leg would form a measuring gap and be followed by at least one more leg up. Since trading range psychology is dominant, these strong 2nd legs often fail. The breakout reverses and then the process repeats in the opposite direction.

Online day traders have to be careful about buying strong bull breakouts or selling strong bear breakouts because if enough institutions do the opposite, it will be easy to buy the top and sell the bottom, and lose a lot of money. Only look to buy a strong breakout if the context is good. It is better if it is a reversal (a 1st leg). If there is an immediate reversal bar after a 2nd leg breakout, be quick to get out. 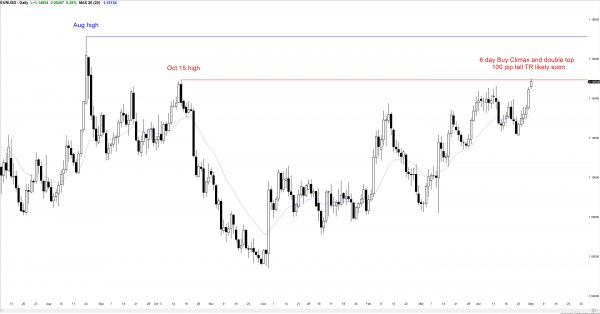 The daily EURUSD Forex chart is testing the October 15 lower high. The bears want a double top. The 6 day rally has been strong enough to make a 100 pip tall trading range more likely this week than a reversal down.

The EURUSD Forex daily chart has had 5 consecutive bull trend bars, and is working on creating its 6th today. It is just above the October 15 lower high. If it can close above it for a couple of days, it will then probably test the August 28 lower high, which is the neck line of the yearlong double bottom. The bulls need a strong breakout above that 1.1712 level to make traders think that the 2014 bear trend has ended. Bears do not mind a bull breakout as long as it fails within a few days.

The 6 day rally on the 60 minute chart has been in a tight bull channel. This means that the 1st reversal down will probably be bought and the best the bears can reasonably expect over the next several days is a trading range. Although the bulls might get a strong breakout above the October 15 lower high, it is more likely that there will be a pullback first. This is because the rally on the 60 minute chart has lasted too many bars without a pullback and is therefore climactic. Also, there 240 minute chart has been in a broad bull channel, and every breakout to a new high since December has been follow by a 100 – 200 pip pullback.

This means that the odds favor a trading range on the 5 minute chart today, with a 100 pip pullback coming in the next few days. However, it probably will be bought and the top of the current rally on the 60 minute chart will probably get tested shortly after the pullback.

The Emini was in a weak bull trend all day.

The Emini spent most of the day sideways. It had a brief breakout in the middle of the day and then a measured move up.

On the daily chart, Friday was a weak buy signal bar for a High 2 bull flag, and today was the entry bar. Although the entry bar had a bull body, it was not especially big. This is following a weak entry bar and a month of mostly sideways trading. The odds are that the Emini will test the July high before having a bigger pullback. Today might be the start of that test.

The bears want a continued channel down from the April high. There were a couple of bear trend days last week, but both had big tails below, and the selloff was therefore more likely a bull flag than the start of a bear trend.

Because today was unsustainable, it was climactic. There is a 25% chance of a relentless bull trend tomorrow, including a possible gap up There is a 50^% chance of some follow-through buying for the 1st hour or two. There is a 75% chance of at least a couple of hours of sideways to down trading that begins by the end of the 2nd hour.