The quiet, tight bull channel from yesterday continued on the open today. The bulls want the reversal up from the moving average to be an Opening Reversal that leads to a new all-time high. The bears want the weak rally fro 41 yesterday to be a leg in a trading range. Until there is a strong breakout either way, traders will continue to scalp, mostly with limit orders.

The Emini got to within 2.25 points of the July all-time high of 2,100 yesterday, and above all 3 of the highs in the October to December trading range. Even though there is no breakout yet, with the Emini as close as it is and with the momentum up as strong as it has been, the odds are that it will make a new all-time high this week. The breakout could be violent and lead to a very big, fast rally, given that it would be coming out of a trading range late in a bull trend.

The cash index is more than 30 points below its all-time high. There might be a divergence here, where the Emini makes a new high, but the cash index does not. That type of divergence increases the chance of a correction down (10%), but not by much.

With the 3 month bull channel as tight as it has been, the odds are that the best that the bears can hope to get over the next month is a pullback into the March to April trading range. If the bears get their reversal, last week’s bull breakout above the bull flag will have failed, and that flag would then be the Final Bull Flag in the 3 month bull trend. A final flag is usually followed by a pullback into the flag, and then more trading range price action. The bulls try to form a double bottom with the of of the prior trading range. They then want a bull breakout and a measured move up. The bears try to form a major trend reversal, and they then want a bear breakout and measured move down. The bear sometimes get a huge, fast reversal that begins with one or a pair of consecutive big bear bars. This often then is the spike in a bear Spike and Channel bear trend. If there is a reversal down, a trading range is more likely.

The bull breakout over the past week has been in a tight channel. That increases the chances that the 1st reversal down will be bought, and then there would be at least one more leg up. That leg would probably result in a new all-time high.

Yesterday had a strong selloff and then a deep pullback to near the high of the Day. Because the rally was weak and it stayed below the top of the bear breakout, today might sell off from a lower high major trend reversal (MTR). Since only 40% of major reversal result in major reversals, the odds are that any selloff today will be a 2nd leg down in a big pullback from yesterday’s high. The bulls would then buy it, betting that it is a big High 2 buy setup (ABC bull flag) and not the start of a major reversal down.

With yesterday being a trading range day just below the resistance of the all-time high, and with the Globex market only up a couple of points, the odds favor early trading range trading. Because of the strong bull momentum over the past week and past 2 months, the odds now favor a bull breakout to a new all-time high.

If there is a strong bull or bear breakout today, traders will swing trade. However, the 4 hours weak rally yesterday makes it more likely that the day will begin with a limit order market and a trading range. 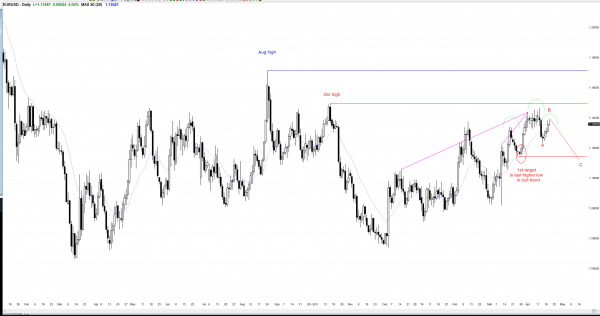 The EURUSD had a 4 day rally that tested the top of the April 15 sell climax high. The rally was weak compared to the other rallies since the December 3 bottom. This increases the chances that the rally is only a minor reversal up from last week’s brief selloff. A minor reversal usually is a bull leg in a trading range, and it is usually followed by a leg down.

The bulls want the rally to break above the top of the 5 month rally and create another higher high is a broad bull channel on the daily chart. The bears want to rally of the last week to reverse down from a lower high major trend reversal. Because of the nested wedge rally over the past 4 months, the odds favor at least a small 2nd leg down to below last week’s low.

The EURUSD has been in a 35 pip range for the past 24 hours. This means that traders are buying high, selling low, and scalping. The odds are that this will continue today, but that there will be at least a 2nd leg sideways to down that test’s last week’s low. The bears want a breakout below that low. That low is the neck line of the double top of the past 2 days. If today breaks strongly below the overnight low, that could begin a 2nd leg down to test one or more of the higher lows since the current leg up began on March 10. The nearest higher low is the March 25 higher low at around 1.1150.

The Emini had a early sell off and then a Spike and Channel bull trend that broke above last year’s all-time high. It reversed down from a Low 6 sell signal, which created consecutive wedge tops. The odds favor a 2nd leg down tomorrow, but the Emini might test above the 2,100 prior high before the 2nd leg down begins.