While the Emini opened with bull bars and broke above yesterday’s high and formed a new high, the first bars had tails. In addition, the bodies got smaller. Furthermore, most recent days had a lot of trading range price action. As a result, while the Emini is Always In Long, the odds are that it will go mostly sideways for an hour or two.

Because of the bull micro channel on the open, bulls will try to continue the rally and create gaps. If they are successful, today could become a Small Pullback Bull Trend Day.

The bodies are small. There are tails on top. There is a buy climax on the daily chart. Yesterday had a lot of trading range price action. This makes at least 1 – 2 hours of sideways trading likely.

While any day can reverse and become a bear trend day, that would be unusual with an open like this. More likely, the best the bears can get for the 1st 2 hours is a trading range. If they get one, they then can try to create a major trend reversal.

The daily chart has a 2 week wedge top. Yet, the wedge is a tight bull channel. Furthermore, the rally formed an 8 day bull micro channel. As a result of this bull strength, bulls will buy the 1st reversal down. Hence, if there is a 2 legged pullback this week, it will more likely be a bull flag. Therefore, trend resumption up is more likely than trend reversal down.

The bears see this Trump election rally as forming a higher high double top with the August high. Yet, when a rally is as strong as this, the bears usually need at least a small double top before they can reverse the trend. As a result, bears will mostly only scalp until there is a double top. Hence, if the Emini sells off this week, the selloff will probably be limited to 2 small legs sideways to down. Hence, it would be a bull flag.

If the bears do not get a double top, they can still reverse the trend by creating 2 – 3 big bear bars closing on their lows. Yet, this is unlikely after such a strong 2 week rally.

The overnight Emini trading was quiet. The bull channel continues to grow after the November 9 President Trump bull spike. While most bull channels have a bear breakout and evolve into trading ranges, there is no sign of a top yet. Friday was the 8th day in a bull micro channel. This rally is therefore extreme and climactic. Yet, climaxes can go far before the bulls take profits. As a result, traders should look for buy setups until there is a clear top or a strong bear breakout with follow-through. Bulls usually buy the 1st pullback in a bull micro channel. Therefore, the bears usually need at least a micro double top before they can create more than a day or two down. 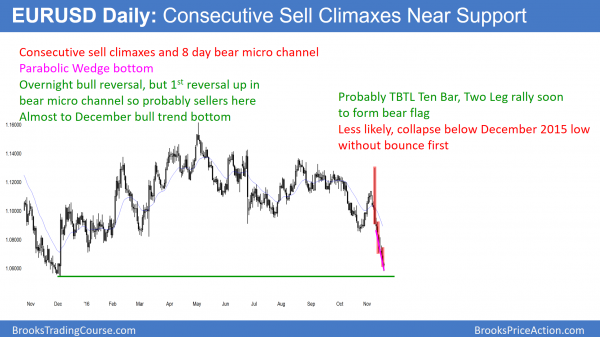 Today is the 1st pullback in an 8 day bear micro channel. While there is a parabolic wedge selloff, the odds are this the 1st reversal up will become a bear flag.

The daily chart has consecutive sell climaxes. While this is a strong bear trend, it is also unsustainable. Because the stops for the bears are so far above, risk is now big. Institutions will therefore probably use this climax to reduce their position sizes. Hence, they would be reducing their risk.

A Parabolic Wedge bottom often leads to a 10 bar, 2 legged rally. Furthermore, the rally can be strong. However, the 1st bull breakout above a tight bear channel is usually minor. The odds are that the bears will see it as a bear flag. Hence, they will sell the rally. Therefore, the bulls will probably need at least a small double bottom before they can create a swing up.

Since the momentum down is so strong, the bears have a 50% of breaking below the December 2015 low. That is the neck line of a double top bear flag on the monthly chart. Because of the 18 month trading range, the odds are that there will be buyers around the December low. Yet, bear will sell any rally, betting on a bear flag.

After 2 big bear bars closing on their lows, the bulls need at least a micro double bottom over then next couple of months. While the bears want strong follow-through selling below the December low, the odds favor at least another month or two of sideways trading.

A double top bear flag late in a bear trend like this often becomes the Final Bear Flag. Yet, the trend often falls for a Measured Move down before there is a reversal up. Because the 18 month trading range is more than 1,000 pips tall, the selloff could extend down to below 0.9500 before there is a significant rally.

The bulls will try to buy around the bottom of the trading range. They want to prevent a strong bear breakout. Hence, they want the trading range to continue. If they are successful, they will then try to create a buy setup within the range. Because the momentum down is so strong, the bulls will probably need at least a month or two of sideways trading to create a credible buy setup. Even then, this 2 week selloff was very strong. As a result, the 1st reversal up will probably be minor. It would therefore probably form a bear flag for at least one more test down.

The daily chart broke above yesterday’s high. This is the 1st pullback in an 8 day bear micro channel. Hence, the reversal up is probably minor. Therefore it will likely create a bear flag. Furthermore, there is still room to the support of the December 2015 low. Yet, because the selloff has been extremely climactic, this rally might be the start of about 10 days and 2 legs sideways to up.

Many bulls do not want to sell when their stop is so far above. Others will want to reduce risk by taking partial profits. Hence, there might be a lack of sellers around this price. As a result, a rally is likely soon. The 1st targets are the recent lower highs of November 15 and 17. 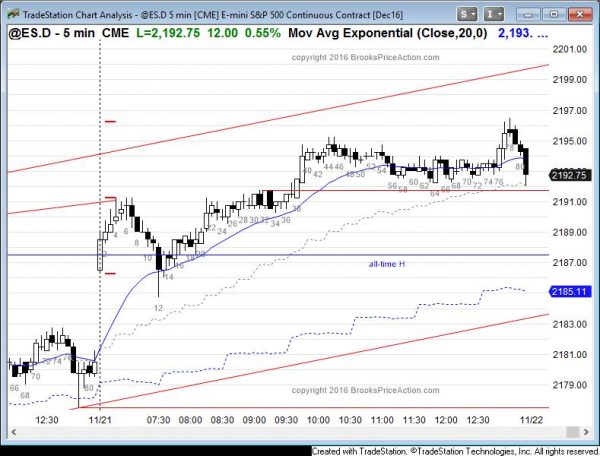 The Emini turned down on the open after an Expanding Triangle Top. Yet, the 6 bar bull micro channel made a bear trend unlikely. After a lower low double bottom at the moving average, it reversed up from an Opening Reversal. This which was also about a 50% correction of the rally from Friday’s low. The rally was a Small Pullback Bull Trend. However, the Trending Trading Range price action was more important. The Emini pulled back from a Wedge Top at the close.

The Emini is overbought. It therefore will likely pull back soon. Because the top of the 60 minute bull channel is above 2200, the Emini might have to get there before the channel evolves into a trading range.