The Emini gapped up but entered a tight trading range, and it is near the top of a week trading range. This reduces the chances of a trend today, and it increases the chances for a lot of trading range price action. This means that the odds are that there will be a swing up and a swing down, and that the 1st swing will probably reverse after 2 – 3 hours.

The Emini formed a head and shoulders top last week. I said that there was a 40% chance that it would lead to a swing down because most tops fail, even when they look good (this one did) and the context is good (this one was at the top of a 2 year trading range, so the context was good for a reversal down).

The daily chart has been in a trading range for 2 years. When the Emini gets near the top of a trading range, and there are several resistance levels above, it usually goes above more than one, but not above all. The final one is the July all-time high. Because the daily chart had 3 lower highs in the October to December trading range and the rally of the past 2 weeks only went above one of the 3, the odds are that it will go a little high and test the December 2 lower high of 2086.25. The odds are against it getting above the November 3 top of the range at 2093.25. If it does, it will probably then go to a new all-time high above 2100.

The Emini has been sideways for 3 weeks, which makes sense because it has been in a head and shoulders top on the 60 minute chart, and most reversal patterns are trading ranges. A trend usually has to transition into a trading range before it can reverse into an opposite trend.

The trading range on the daily chart is coming after a strong rally and it is therefore a bull flag. This means that the odds of an upside breakout are greater than for a downside breakout. Every bar that gets added to the trading range reduces the odds. After about 20 bars, the odds fall to close to 50% for the bulls, which then is only minimally higher that for the bears.

Friday had a sell climax. That means that there is a 50% chance of follow-through selling in the 1st hour or 2, and a 75% chance of at least a 2 hours sideways to up move. That move might have started on Friday. The Emini is up 8 points in the Globex session. The 60 minute head and shoulders top (lower high major trend reversal) remains in effect unless the Emini rallies above the right shoulder. A bear trend needs lower highs. Bears know this and put stops above lower highs. The April 6 lower high of 2060.60 is the important one. Bears theoretically exit 1 tick above. It is therefore a magnet.

These lower highs are magnets. The Emini often rallies up to one and then reverses down from the double top. That is what we will find out this week. Will the buy vacuum up to the lower high result in a bull breakout and then a quick move up above the all-time high, or a double top and a reversal down? The odds still favor the bears, but a move above the November 3 lower high would shift the odds to be in favor of the bulls.

Last week’s bear breakout below the neckline of the head and shoulders top reversed up. That reduces the chances for a top. However, as long as the reversal up forms another lower high, the bears still have a bread bear channel, which can lead to a measured move down. The bulls this week need to get above the 2060.50 lower high to end the short-term bear case. They then need to get above the top of the November high. If they do, the odds then favor a new all-time high. If they do not, the odds still favor a reversal down into at least a 100 point tall trading range that will last at least another month.

The EURUSD has had 7 consecutive sideways dojis on the daily chart after breaking above the March 17 high. The bottom of the tight trading range has been held above that high, which means that the space between the tight trading range might be a measuring gap. The October 15 lower high just above at around 1.1500 is resistance. If the bulls an get above that, the next resistance is the August 24 high just above 1.1700. That is the top of the yearlong trading range. As long as they bulls keep the gap open on the daily chart, the odds favor at least one more leg up.

The 5 minute chart reversed up over the past hour from a higher low in the 7 day tight trading range. However, trading ranges have many strong moves up and down. Eighty per cent of them fail to lead to a breakout (my 80% rule), so the odds are against this one being more than another leg in a trading range.

However, because of the gap up on the daily chart, the odds still favor at least one more leg up. One of these bull breakout attempts will probably succeed. Until one does, bulls will still be quick to take profits and bears will sell the rips (strong rallies), since both know that strong legs within a trading range usually reverse. Traders buy low, sell high, and scalp for 10 – 20 pips, and they will continue to do that until there is a breakout. 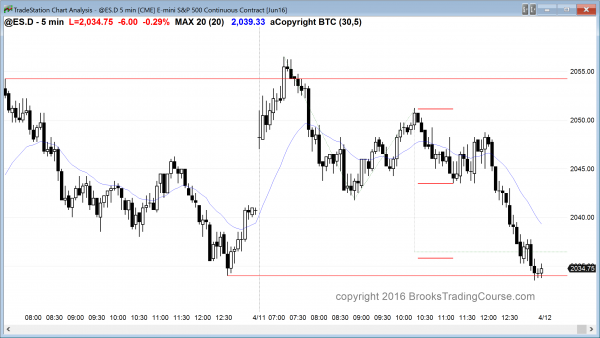 The Emini reversed down from above Friday’s high and then entered a trading range for several hours. It failed to hold near the open of the day and instead got bear trend resumption in the final hour and formed an outside down day.

Today was a trend resumption bear trend day, but it is within a 3 week trading range, and the 60 minute chart probably has a failed head and shoulders top. The bulls are probably strong enough to test the right shoulder up at around 2060 this week. The bears are hoping that whatever rally comes will be another lower high, and that the 60 minute chart will fall for a measured move down. Whether or not there is a test up, the odds are that the Emini will fail to get above the all-time high of 2100, and instead fall about 100 points from the early April high and for a trading range that will last at least another month.