Yesterday’s late selloff was likely the start of a trading range. The reversals up and down today increased the probability. After a buy climax, there is a 75% chance of a trading range lasting at least 2 hours. This means that the Emini will probably be in an opening trading range.

The 2 moving average gap bars at yesterday’s close will probably lead to the final leg up in the bull trend before an attempt at a major trend reversal. Yet, major trend reversal setups only have a 40% chance of leading to an actual opposite trend. More likely, today will be a trading range day.

Fifty-percent of Tuesday’s selloff was probably caused by put-selling firms. As the market fell, the delta of their puts increased exponentially, as is always the case as the market goes down. This caused the put sellers to incur rapidly increasing losses. The easiest way for them to hedge is to sell stocks and futures. Once they were adequately hedged, the market returned to normal by the end of Tuesday.

The Emini is down 1 point on the Globex chart. After Tuesday’s sell climax and yesterday’s buy climax, the market is confused. That makes a trading range likely today. This is especially true ahead of tomorrow’s government shutdown vote. 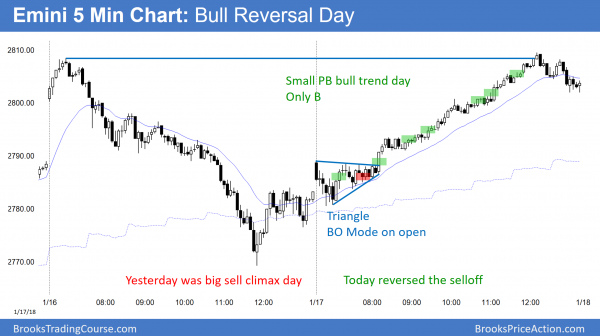 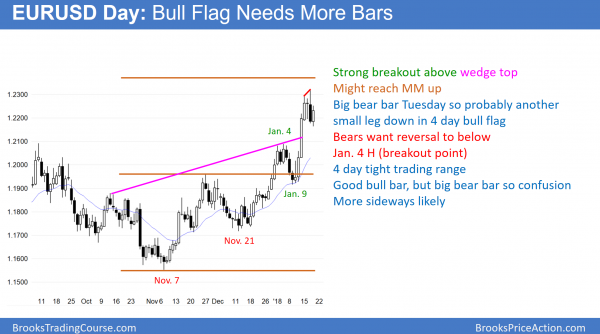 The EURUSD daily Forex chart is in a 4 day bull flag. Because Tuesday was a big bear day, the odds favor a test of Tuesday’s low within 3 days.

The EURUSD daily Forex chart rallied strongly last week. The odds are that it will have at least a small 2nd leg up. Yet, it is at resistance on the monthly chart. In addition, it is close to the top of a wedge rally on the monthly chart. Consequently, this rally on the daily chart might simply be a buy vacuum test of resistance. If so, the bears will be able to take control before the rally goes much higher.

The bears need a strong reversal down on the daily chart. They can either get a bear breakout below the 4 day bull flag, or a reversal down after a breakout above the flag. Since the daily chart has strong momentum up, the bears only have a 40% chance of a successful reversal over the next several weeks.

I said yesterday that the bulls would buy below Friday’s low. That was a reasonable entry for a 50 – 100 point trade. In addition, since the bulls are still in control, it is reasonable to hold part of the long position. However, Tuesday’s selloff was strong. Furthermore, the daily chart has been in a tight trading range for 4 days. This makes a test of Tuesday’s low likely within the next few days.

A government shutdown sounds like an important event, and it is. However, it has happened 18 times in my adult life, and it has never created a lasting problem.

If the US government shuts down tomorrow, or if there is some unexpected news event, it would override these technical factors. It could lead to a huge move up or down since the monthly chart is at major resistance. It is at the top of a 3 year trading range and at the bottom of a 15 year trading range.

The EURUSD 5 minute Forex chart rallied 90 pips overnight from above yesterday’s low, as expected. However, Tuesday was a big bear day and the 5 minute chart is now at around a 50% retracement of that selloff. Furthermore, the overnight rally was not especially strong.

While there were consecutive bull bars on the 60 minute chart, they were small compared to Tuesday’s bear bars. This makes the overnight rally more likely just a bull leg in the 4 day trading range. Consequently, it is more likely to lead to a bear leg in the range than to a resumption of last week’s bull trend. Therefore, day traders will begin to sell above prior highs on the 5 minute chart. In addition, the bulls will buy pullbacks rather than above prior highs. The result will probably be a trading range, scalping day today. 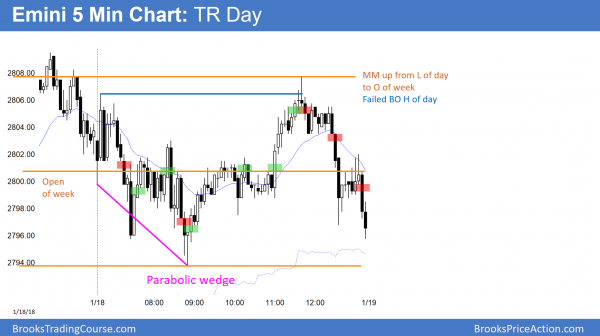 After yesterday’s strong rally, today was a trading range day. There was a bear swing that reversed up midday into a bull swing. The high was a measured move up from the low of the day to the open of the week.

After Tuesday’s big selloff and yesterday’s big rally, the market was balanced and confusing. The result usually is a trading range, which formed today. The Emini is neutral going into tomorrow’s congressional vote on the budget and a possible government shutdown. The open of the week will probably be the most important price tomorrow. The bulls want a bull body on the weekly chart, but the bears want a close below the week’s open.