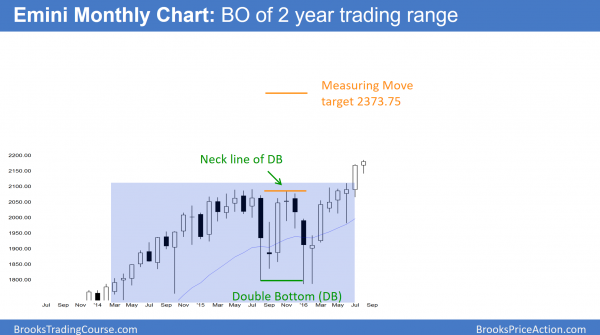 The monthly S&P500 Emini futures candlestick chart has 7 consecutive bull trend bars. This is unusual on the monthly chart so the odds are that August will close below its open. It is too early to know if the rally will eventually reach the Measured Move target. The 2 year trading range late in the bull trend is probably the Final Bull Flag. Traders should be ready for a possible stock market August correction.

The monthly S&P500 Emini futures candlestick chart has had 6 consecutive bull trend bars. Because this is unusual on the monthly chart, it is unsustainable. Therefore, it is a buy climax. Hence, the odds are that August will have a bear body, which means a close below the open of the month. If August is a bear trend bar, it would be a sell signal bar in September. However, after 6 consecutive bull trend bars, the odds are that there would be buyers below the August low. Hence, the best the bears will probably get is a pullback in a bull breakout. 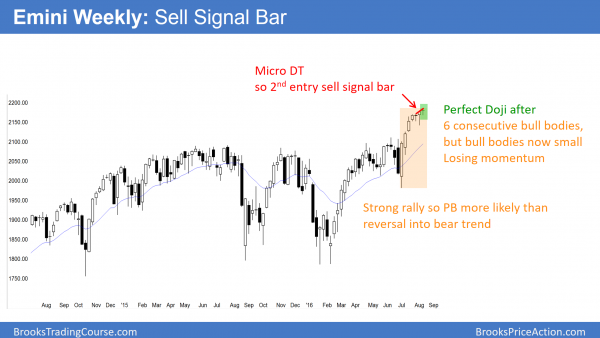 The weekly S&P500 Emini futures candlestick chart has rallied for 7 weeks, but the last 4 have had small bodies. The rally is losing momentum. Yet, there is no sign of a top.

The weekly S&P500 Emini futures candlestick chart has been rallying for 7 weeks. Yet, the past 4 weeks have had small bodies, which is a sign of a loss of momentum. Furthermore, the 1st 6 weeks had bull bodies. That is extreme behavior and it is therefore climactic. Because the Emini broke above a 2 year trading range last month, traders are wondering if the breakout will fail.

This past week is the 2nd sell signal bar since the breakout, and 2nd signals have a higher probability of success. As a result, bears will be more willing next week to sell if next week trades below this past week’s low. Furthermore, bulls will be more eager to exit. They see the past 4 weeks as disappointing. Hence, the odds of a failed breakout are higher.

While the rally can continue indefinitely, the loss of momentum and the absence of bears bars make a pullback likely soon. 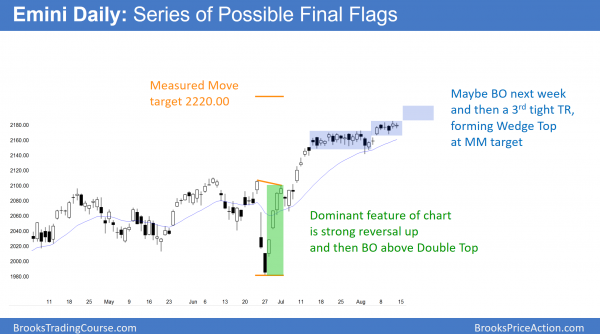 The daily S&P500 Emini futures candlestick chart has measured move targets around the big 2200 round number. While there are nested Final Flag Tops on 5 time frames, the odds still favor a little more up before a reversal down.

The daily S&P500 Emini futures candlestick chart The Emini daily chart has been in a tight trading range for 6 days. There is an adage on Wall St. that says, “A small trading range above a bigger trading range will reverse back down.” While most sayings are not reliable, this one is interesting because it is consistent with what I have been saying about the nested Final Flag Tops.

The daily chart still has Measured Move targets around 2,200 and 2,220. Furthermore, the momentum up is good enough to get there. The odds favor a test of the resistance levels above. Yet, the bull trend is old and weakening, there is an unusual nested top on 5 time frames, and August often has strong pullbacks. Therefore, the odds also favor a 50 – 100 point selloff within the next several weeks, whether or not there is a test of 2,220 first.

Because there are obvious resistance targets above, there is a risk of a Buy Vacuum test of those levels. Support and resistance are magnets. Hence, when the market gets close, it often accelerates to the magnet. Once there, the magnetism often suddenly disappears.

If traders become very confident of reaching the targets, bulls buy aggressively. Sellers stop selling because they know they soon will be able to sell at a higher price. As a result, the market can accelerate dramatically to the targets. Furthermore, it often overshoots the resistance. However, the bulls take profits at the targets. Additionally, the market is then exactly where the strong bears want it be. With bulls selling to take profits and bears shorting, the market can reverse down sharply and for a long time. In conclusion, traders should not be surprised if there is a climactic top soon.