Question: Lots of early reversals made me skeptical of the bull trend until about B31 close. I shorted with limit orders many times before that, but the swing down never came. Could you comment on trusting the Buy The Close move versus doubting it?
Video duration: 3min 03sec 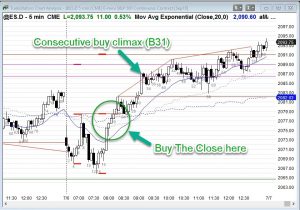 When that happens, to me that’s a sign of really aggressive bulls who are afraid of missing the trade. They don’t want to take a chance of not being filled. When 18 closes, a lot of bulls will place a limit order at the 18 close, and they did not get filled. At that point, something’s very strong here. Too many traders are buying the market instead of buying with limit orders.

Who is making money?

I understand you see all the reversals, and then yesterday you see all the reversals, and it’s natural to assume that the market will continue to reverse. But at this point, somewhere in here, you have to be thinking that, Okay, we have an expanding triangle bottom and a pretty strong reversal up, and then last week was a very strong trend. And then you see bars not trading below the close of the prior bar, so there’s a lot of urgency on the bulls. So we’re probably going to go up for some kind of a measured move.

Whenever I see something like this, breakout follow-through and more follow-through, yes, they’re selling new highs, they’re buying new lows, and we’re at resistance, high of the day, 60-minute moving average. I’m just not going to short. I’m either buying closes or I’m waiting to buy a pullback.

I understand when you see all the reversals, it’s natural to think “Okay, it’s in reversal mode, and therefore I’m going to sell and scale in higher.” On B31, that’s not where I would conclude that the bulls had won and that it had converted to Always In Long. I said down here [B18-20] that I thought we were Always In Long.

So yes, you’re concluding that the market is Always In Long at that point, which is true, but it was Always In Long earlier, probably somewhere down here [B18-20]. And if you’re buying a consecutive buy climax at resistance, I think you need a wide stop and you have to be patient.