Where did all that selling come from? (Bars 70-81). I know big traders and computers will short above swing highs expecting points like bar 28 to be tested, and to take profits, but it just keeps going. I don’t understand why.
Did bears just hold because bar 76 was strong? Or was it the wedge? Or no-one left to scale in?
Audio duration: 9min 44sec — Scroll down for images

Where did all that selling come from?

That is a really good question and really important question. He’s asking, “Why?” He’s asking fundamentals. Trading has nothing to do with fundamentals, for the most part. At least nothing to do as far as most traders are concerned. You hear the idiots on Fast Money, and the pundits all the time talking fundamentals. A stock can be going up for 6 months, and then you’ll hear, “Oh, the world population is growing, there’s going to be a demand for corn. And therefore, Monsanta should go up.” But the world was growing yesterday, it was growing a month ago, it was growing 6 months ago. And the demand for food was there 6 months ago as well. So why today, all of a sudden, should we buy Monsanto, or Potash? To me, it’s all craziness to argue fundamentals. Most of the time, even if you know the fundamentals, you don’t have the ability to understand them. So when you’re asking, “Why?” to me it’s kind of asking fundamentals. And they’re irrelevant. 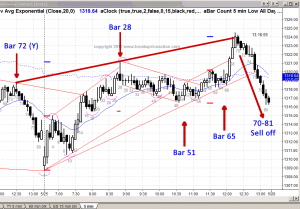 Most of the trading that we see during the day is done by computers. And the computers are basing their trade decisions on mathematics. And it’s not like all the firms are using the same algorithms, and everyone is coming up with exactly the same prices. A lot of the measured move targets are the same. But big moves and crazy reversals like down from 70 take place only because a whole bunch of computers had the same algorithm, or comparable algorithms. Some might be shorting because of the 51 – 60 wedge. Others might be shorting because of yesterday’s 72 and today’s 28 wedge. Others could be shorting because of measured move targets. It doesn’t matter. As long as enough computers are doing the same thing, the market will act in a certain way. Once a move starts to pick up speed, like 67 – 68, you get computers that are trading purely on the basis of momentum. “Eight of the past 10 ticks were up, therefore we are going to buy. We are going to keep buying until we get some down ticks”. So the momentum traders piggy-backing onto what the other computers are doing on the move up from 66. Now when the momentum starts to slow, the momentum traders take profits. When the momentum starts to build on the downside, 76 – 77, those momentum computers, they don’t care about fundamentals – they don’t even care about mathematical targets, or measured moves. They’re just trading momentum. They see the momentum on the downside, they just start shorting. And they keep shorting all the way down until the momentum stops, and then they’ll buy back their shorts. But as they are shorting, they’re triggering signals for other traders to short. “Oh, the market moved below the 68, 67 strong signal bar”. So some computers will short there. “It moved below 66” – other computers will short there. “It moved below 62” – other computers will short there. “Oh, it fell 4 and a quarter from the high” – some computers will short there. “It fell 6 points from the high” – other computers will short there. “It broke a trend line… It broke a trend channel line.” And if enough computers are placing trades in the same direction, you can get a move that can go very far and very fast.

My job as trader 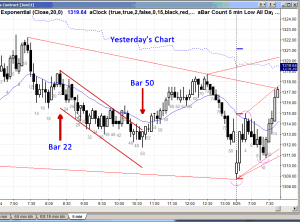 But I understand that it can be disturbing to see crazy things like the move up to 69 and then the move straight down. It’s a low probability event. But every event has a probability. And most events have a probability of at least 20% to 30%. No matter how crazy the move appears at the moment that it’s taking place, it still has its point to 30%. At any point during the day, I always think there’s at least a 20% to 30% chance that the next bar could be the start of a trend in the opposite direction. Always, always, always, always. And I never worry about “Heck why – how can that be?” I always say that. Even if I think the market has a 70% chance of going up. Back over here [yesterday’s chart – below] I probably said something like a 60% – 70% chance of higher prices. That means a 30% chance of not higher prices. And a 30% chance that that’s the top. How could it possibly sell off? It doesn’t matter. If the computers make it sell off I don’t need to know what their algorithm is. Nobody knows what anybody else’s algorithms are. And it doesn’t matter. I just follow the flow. And if you look at higher timeframe charts, a lot of times things, patterns look clearer. This is the timeframe I am trading. I could look at a 1 minute chart and everything could look confusing and I might not be able to take the trades fast enough. But whatever confusion I see on the 1 minute chart, I’ll probably see clarity on a 5 minute chart, or 15 minute chart, or 60 minute chart. So whenever we see stuff that looks confused here, higher timeframe traders see it as very clear. This channel down yesterday from 22 to 50, is very sloppy, I’m sure that on a 15 minute chart or 60 minute chart it was very clean.

The music of the markets

Anyway, back to your specific question, as far as why is this craziness happening. I just smile, I sit back and I smile and I say “Well that’s really fascinating how a low probability event just took place.” I smile and I never worry about it, because if I worried about why, all I can do is get myself upset because the reality is it’s all mathematics. And everything has a definite, real probability. And the opposite of what you believe has a real probability. Probably at least 30% at all times. A lot of times it will be 60% opposite of what you believe. You think you’re 60% certain, the reality is the market is 60% likely to do the opposite of what you believe is 60% certain. You just never get attached to an opinion. Never get convinced that the market is going to do something. Always accept that no matter how confident you are – even the craziest idea has a 20% – 30% chance of happening. And no matter how confident you are, it’s hard to be more than 60% confident, but that means a 40% chance of the opposite happening. And 40% is a large enough percentage that you have to be very respectful of it. You have to be willing to change your opinion within a bar or two. And I do that all the time. But that’s Ok. For me, that’s one of the enjoyable things about trading – can I just kind of float all day long on the waves, and ride the waves wherever they’re taking me. And not fight it, just go with it. And I like that, to me it’s personally satisfying. It’s very challenging, but it’s very satisfying. To be able to listen to the music of the market, and then being able to move with it. To me it’s very pleasing. However, there are all kinds of things that when you’re starting out – they’re upsetting. I mean they’re crazy. Like the sell off from 70, you look at it and say, “That’s not fair.” But it doesn’t matter. There’s no way to program fairness, so it’s not a consideration in the computer algorithms. Should a trader have shorted below 70, given it’s a bear inside bar after a breakout? I’m sure lots of traders looked at it and said, “Yeah, low probability trade. But it may trade down 4 or 5 points and I’m risking 7 ticks to make 4 or 5 points on a 30% bet. I’ll go for it.” And the traders that took that trade, they did just fine.

‘Why?’ is never important

Anyway, I’m sorry about going on about this, but I think it’s really, really important. “Why” is never important to me, “Why” in the fundamental sense. To me it’s all mathematics. There are magnets all over the place. The market gets vacuumed up to prices like the 69 high. It gets vacuumed down, like the 9 low. And that happens all day long. Once the market reaches the vacuum area, the target area, bears appear out of nowhere. “What? How can that possibly be?” It’s because the bears expected the prices to hit 1,324 for whatever reason, and they were not going to short until they got there. The bulls thought it was going to hit that price, for whatever reason, and they were not going to take profits until it got there. Once it got there, the bulls sold out, they took their profits, and the bears started to short. And the bears were going to scalp out lower, they were going to buy back lower, at the first sign of a bull flag triggering. The bulls were looking to buy lower, as soon as a bull flag was starting to set up. It never set up, so the bulls never bought. And the bears never bought back their shorts. The market just kept selling off. To me I just admire it, I just look back and I enjoy it. To me it’s like looking at a garden, watching the stuff grow. To me it’s very satisfying, I like it. And I like being able to move with the music of the market. And it takes a long time to be able to just let go. To become a follower, and just let the currents move you around. And not fight them, and just let them take you wherever they’re heading. I think that is a very important character trait to develop in becoming a successful trader. Alright, sorry for running on like this. Hope everybody has a good night.