Question 1 of 3: What is the highest probability trade today?
Video duration: 6min 04sec

High probability – not the whole story 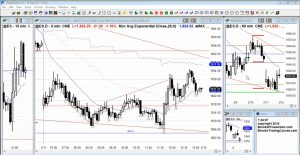 Also, I think when you’re starting out it’s a difficult trade to take.  When the market’s going down, down, down, and you’re thinking, “Oh my gosh, it’s going to fall below the January low,” and instead it reverses up suddenly like that, it’s just really hard starting out — just become brain dead and mechanical, but that’s what I do.  It’s going up 62, I don’t think, “This can’t be happening. This is happening too fast; the risk is too big; I better wait for a pullback.”  No.  I say, “Buy the market.  Just hit the button.  Buy the market.” The market is clearly going up and it’s going up very fast.  It’s a big surprise to everyone, bulls and bears, it’s going higher, right?  Everyone is going to have to adjust to this reversal.  It’s going to go higher, and the slower you are to hit that button, the less profit you’ll have and the greater your risk will be.

Be prepared for reversal

But in those first two minutes, 62, it was clearly a change in the market.  There was clearly a change in the market.  And, you know, I said earlier these gap bars could lead to major trend reversals so you had to be prepared for some kind of a reversal around the low of the day, and we’re at such critical support on the daily chart. And we’re also at the bottom of a channel in the 60-minute chart. So there were a lot of things going on that had the potential to lead to a reversal.

Question 2 of 3:  Do you think it is more difficult to enter as a bar is forming than it is to buy or sell closes? I have a habit for picking the worst possible tick to enter when I buy and sell the market.

Enter on the close, or before?

In general, it’s easier to enter on the close because a lot of times you anticipate it.  Three or four minutes into the bar you’ll say, “Yeah, this looks like a good close.  I’m going to buy it when it closes,” so you can be ready for it. And buying as the bar is forming, a lot of times — like 62 — it’s a surprise, and it’s hard to do.  50, 12 — those were clearly Sell The Close. And 50 especially happened very, very quickly so, when in doubt — when I’m in doubt — I just enter at the market.  On most software, you have some kind of a button that says, you know, Sell the market or Buy the market, and I use that a lot in bars like 50 and like bars 62 and 64. When it’s clearly moving very quickly and you know it’s going to go higher or lower, depending on if it’s a bull or a bear, I just hit “buy the market” or “sell the market.”

[Ref picking worst possible tick habit] What you’re doing is you’re waiting until you’re convinced that the market is going up. So you end up buying the high and at that point experienced traders are taking partial profits, and you get a pullback.  I don’t have a problem with that.  Buying the 62 close, who cares, right?  So you’re buying whatever, 12 points off the low.  That’s fine.  You know it’s going higher; you know it’s going up for at least a measured move, so as long as you can trade small enough, you have a 60 or 70 percent chance of making a reward equal to your risk.  That is a good trade.

Does your trade make sense?

So, I wouldn’t worry about buying or selling the market; all I would worry about is whether or not whatever you choose to do makes sense, right?  So buying the 63 close, 62 close, it made sense.  So if you used the right stop and taken an adequate profit, it made sense so it does not matter that you’re entering a little bit later than other traders.  What you’re doing makes sense.

Question 3 of 3: Al, can you talk about how you traded the bull spike 62 to 65?  How many trades? When flat? Market orders, limit orders, one or two point scalps?

Traders are buying – so buy!

I think the first trade, I bought 62 as it was quickly turning up.  I don’t remember what I said, but I said something to the effect that this is going up; traders are buying.  I may even has said I’m buying.  So the first trade, to be honest, I don’t know how much I made.  I know I made at least four or five points on one trade and then I think I switched to two-point scalps. And, I don’t remember, I may have bought. This first one, I just hit “buy the market” and then when it got up pretty high I just took a profit. And then I bought the 63 close.  I think I went for four points on the 63 close.  I don’t remember.  And I don’t remember if I took a third trade up there or not.  And what did I do?  In here, I think I bought the 69 low and that was it.  I think I took two points and that was it.

No edge, no trade

I debated about buying as 74 was going up, but I was tired and if I’m not at my best whatever little edge I have over Goldman Sachs is non-existent. So if I’m not at my best, I just sit and I wait.  You know, I’m a body, right? I’m not a machine and, every good trader can only have a small edge because he’s competing against really smart, experienced people. So if you’re not at your best, whatever edge you have when you are at your best, is not there.  So if you do not have an advantage, it does not make sense taking a trade.

Okay, so tomorrow will be interesting.  To me, this short covering so far is not enough to make me think we’re going a lot higher.  We might, but the bulls really need follow through otherwise we’re going to fall below that January low within the next few days.

Okay, hope everybody has a good night.