You said it would take about two years to become profitable after taking your trading course. What about if we only take your trade recommendations in this trading room webinar?

Can I learn to trade profitably in 2 years? 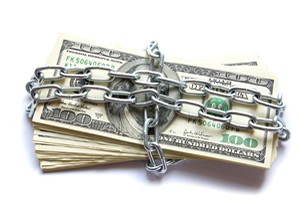 Actually, I don’t know that I said that it would take about two years to get profitable after taking the class (course). I think what I said was if a trader is going to stick with it and do everything right and try really hard, and he is going to end up being consistently profitable, I think it would take at least two years. I think it takes at least that long to get good. But it takes a lot of work, too.

Okay, question: What about if we only take trades recommendations on your webinar versus starting the video course?

I don’t know. You can read books; you can practice trading on your own; you can study charts; you can take the video course; you can sit through this every day and listen to what I’m saying. And it all helps. And the more information that you accumulate, the faster you have a chance at being consistently profitable and doing this for a living. But as far as what traders should expect, should someone be able to do it in one year or should it take one year, or should it take five years? It took me 10 years and I’m a pretty smart guy, so that tells me that high IQ alone is not enough to be a good trader, and it also makes me believe that you don’t need a super high IQ to be a good trader. 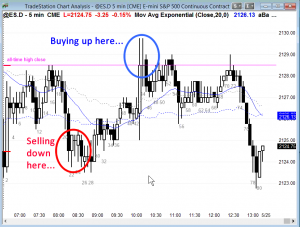 Remember, 90 percent of the bars on the chart, at any moment, you can buy or sell and make money if you manage your trade correctly. It’s only 10 percent of the bars on the chart that it’s better only to take a trade in one direction, during a strong break out. But for the rest of the day, even buying up here (B43/44) — if you scale in lower, you can make money. Even selling down here (B21) — if you manage correctly, you can do okay. You scale in higher, get out break even on the first, right?

So, the issue is not “Oh, my gosh, there are no opportunities to trade.” The issue is whatever style of trading the market is offering at the moment, are you comfortable doing it, and do you have the ability to stay in the game? I played tennis last night and my partner and I, we always play doubles. And we played against a pretty good team, and I did some things that made the other guys start to get flustered — one of the two other guys to get flustered — and he’s a really good player, and he could not stay mentally tough, and we ended up winning the second set really easily because he could not stay in the game; he could not keep his head in the game. And that’s true in any endeavor in life. The people who do really well are people who can maintain their focus and continue to do what they should be doing throughout the whole time.

I have another friend who only trades the first hour every day. I have another friend who trades the first two hours and then goes out and does activities for a couple hours and then comes back and trades the final two hours. I have friends who scalp; I have friends who only swing trade. And a big part of trading is finding a way to trade that suits your personality, and there are many, many ways to do it. And it’s a hunt, right? You’re trying to find what suits your personality. You have to be able to stay in your comfort zone if you’re going to be doing this for a career. That means you’re planning on doing it for many, many years, and you have to make sure that it’s a style that’s compatible with who you are.

So, how long does it take you to get to the point when you can do all the right things often enough so that your wins are bigger than your losses? Realistically, I think if a person expects to accomplish all of that in less than two years, that’s not a realistic expectation. I think it takes at least a couple of years.

Going for a Masters in trading?

So, one of my kids, she’s at Harvard Business School; she’s going to get her Master’s in Business Administration, and she’ll probably start — I don’t know how much money she’ll get paid when she gets (a) start. She’ll probably get paid $150,000 maybe, to start. But five years from now, she might be making five times that, and it’s because not only do you have to master the material, you have to get really good applying it to your career. So, it’s nice to have a Master’s in anything, but you become much more valuable after you are in your career for three, four, five, six years applying what you learned when you got your Master’s Degree, and I think that’s true of trading.

So, realistically, I think anyone who is expecting to become consistently profitable in less than two years, I think it’s not realistic. And even once you become consistently profitable, you can consistently make money, but you can make vastly more money over the next several years if you keep working on your craft and keep getting better and better and better. So, to say “Will I get profitable in two years? Will I be able to quit my job in two years?” for most traders, I think that is unrealistic. I think they can start getting good in two years, but as far as making a lot of money, it will take more than two years. I think two years is enough to get you going, but it will take several more years after that if you want to become a superstar, you’re not going to do it in two years. It takes many, many years, and you keep getting better as time goes on.

So I hope that answers the question.