Al, what do you think about paper trading in a simulated account? Once a trader knows how to use the platform, is it a help or a hindrance to become a profitable trader? I sim trade a lot, and I’m not sure if it has a positive effect.
Audio duration: 2min 54sec 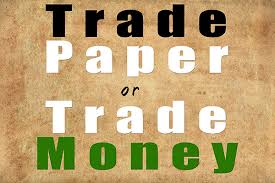 I don’t have any problem with sim trading. I’ve done it; everybody has done it. I personally don’t like it because I cheat, I lie. Not in general; when I’m talking to people, I don’t cheat and lie, but if I’m sim trading, I’m talking to myself and I lie. I lie all the time. So it’s easy to tell myself, “Oh, I would take that,” or “I would not take that,” or “Oh, I took a bad trade and I lost, and maybe I should delete that trade because it was really one I should not have taken.” And you end up erasing—or I end up coming up with reasons for why all my losing trades were trades I really wouldn’t have taken if I were paying more attention or if I really was concentrating on it.

And all my winners, I look at them and say “Oh, yeah… I was also trading in my real accounts, and therefore, I couldn’t focus on my simulated account, and I took profits earlier than I normally would have taken”, and it’s just all lying to myself. For me, that’s my problem with simulated trading: it’s just really easy to lie to yourself all the time, and make yourself believe that the way you’re trading it is not the way you would trade it if it was real money.

I think one of the nice things about Forex markets is that you get to trade a very small account with very little risk, and I think trading real money is always better than trading pretend money because it’s just harder to lie. The dollars are truth.

And for Forex accounts, you can trade 10,000 units and you can say, “Well, Al, if I make 10 pips on 10,000 units, I only make $10.” That’s right, you only make $10. On the other hand, you’re not going to go broke doing it, so to me, it greatly reduces the cost of tuition as you learn to become a trader, so I think that is a big advantage to Forex accounts. And there’s enough movement during the day in the different markets, especially if you stick with the major markets, like the Euro versus the Dollar, the Euro versus the Yen, the Dollar versus the Yen. Those are probably the big three. I also trade the Dollar versus the Canadian, the Australian dollar versus the Dollar, the British pound, the Swiss franc.

But there are enough choices and there’s enough movement so that if you’re starting out, my thought is if I were in that position, I would rather trade real money in a Forex account trading 10,000 units than paper trading—anything else because of that lie factor. I think it becomes more important if you have real money at risk, even if the real money is very small.