A perfect trade setup on the 15min chart? 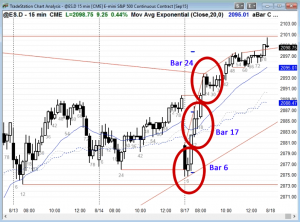 So he’s saying, like, bar 6, maybe it’s a reasonable buy. Bar 17. I think it doesn’t matter what chart you trade, and if I get rid of the session breaks and the time scale and the price scale, you will not be able to tell whether this is a 15-minute chart or a 5-minute chart. I guess you would because of the gaps down, you just count and say, “Oh, okay, every 26 bars is a 15-minute bar.

But perfect trade setups are out there—right?

Basically your question is a variation of the perfect trade setup: does the inside bar pattern work well, especially while on the 15-minute chart? And my belief is that it does not work any better on the 15-minute chart than it does in any other timeframe — although sometimes for several days in a row, it will work really well on a certain chart — 5-minute chart, 15-minute chart. Remember, all the high-frequency trading firms use their algorithms for two days, five days, and then they switch to a different algorithm because whatever was working for the past two, three, or four days is working less well now, and something else is working more well now. So at times, it seems like a particular pattern works very well, and it does, and it might work very well for another day or two, but that will probably be the extent of it. It will stop working. The computers will detect that something’s working really well and eventually, they will not take the other side of the trade, and too many of them will start taking the same side that you’re taking, and the trade cannot work unless someone is willing to do the opposite, and it will quickly stop working.

So I would not think about “Did I find a goose laying golden eggs? Did I find something really special that nobody else knows?” I wouldn’t think of it like that. I would think, “Is the context good? Is the setup good? Can I structure a trade with a good stop and a good profit target?” Doesn’t matter [about] the timeframe. Can I structure a trade where the math makes sense and not worry about finding one particular setup that is really reliable — because you will not find it. You might find it for a day or two, but then you trade it on the third day and the fourth day, and you lose money and you gave back more than what you won on day one and day two, and you wonder “How could that possibly be? It was such a great setup.” And it was a great setup for a day or two, and then it stopped being a great setup and some other setup was great, like doing the opposite of what you’re doing. So instead of buying above that great-looking, 15-minute inside bar, it became more profitable to sell above that great looking, 15-minute inside bar.

So the takeaway is: Don’t worry about perfect trades and don’t go thinking that something works especially well on one timeframe. It doesn’t. It will work well on any timeframe some of the time. But you never know in advance when it will, nor do you know how long it will. So I would not be thinking in terms of perfect setups. I think that is a sure way to lose money, looking around for that perfect setup. I still occasionally see articles and websites that basically talk about perfect setups and perfect trades, and whenever I see that I know the person who wrote it is either dishonest or stupid. And since there are so many dishonest people out there, in general, I assume the person is dishonest.

Making money is hard work. Everyone wants it to be easy. They want a savior, or protector, right? A perfect setup, right, where they know that, yeah, they might lose sometimes, but they’re never going to lose much and they’re never going to lose often, but they will win a lot and they’ll win often. And they’ll have something that will work, not just for today and tomorrow, but forever. They want a perfect setup. And what they’re saying is, “I’m afraid of all of this. This is hard work. I don’t know that I can do the work. It’s hard to do it every minute of every day for year, after year, after year,” but that’s what you got to do. And you can do it, right?

Just do the work—that’s all it needs

If you put the work in — there’s nothing magical to trading — there’s nothing magical to making money trading, right? You just got to do the work, and — I occasionally get e-mails from people who are doing extremely well. When I say “extremely well,” I mean you can just put the number of zeros that you want after the number. The trader’s doing extremely well. They often ask me, “What do I do next?” and I say, “Nothing. You’re doing what you’re supposed to be doing. You’re consistently making money,” and it can get boring, but the key is to stay in the zone, continue to do what you’re doing and not worry about doing a whole bunch of other things, making a lot of changes, right? If you’re Tiger Woods and you got a great swing, don’t change it six times. If you’re Usain Bolt and you’re running whatever — 9.59, 100 meters — I would not be out there changing a lot of things. I would just try to continue to do what I’m doing as well as I possibly can do it and not worry about going to another level.

And that’s life as a trader. You get a bunch of tools and they work reasonably well, and if you’re one of those people who sends me an e-mail telling me, “Al, I made $4,000 yesterday,” or “I made $25,000 yesterday,” or “I made $15,000 this week,” and you ask me, “Al, what do I do to make more?” I’m telling you right now what the answer is: Just keep doing what you’re doing, stay humble, don’t start thinking that you can overpower the market and outsmart the market. Just continue what you’re doing, and don’t get greedy, and stay comfortable, and have fun, and be happy. And it’s magical. It can totally change your life. But don’t get bigger than yourself. Be humble. Say, “Hey, I’m just a guy or I’m just a gal, and I’m doing it, and it’s working, and I don’t have to go to some next level. I can just keep doing what I’m doing day after day. I like doing it year after year, and that’s my career.” And that’s the reality. There’s nothing beyond that, so it’s not as if you can keep adding, and adding, and adding, and adding, and getting greater, and greater, and greater, and richer, and richer, and richer. You don’t have to. All you have to do is — you have a basic set of tools and use them consistently well. You don’t have to be hitting homeruns. All you have to do is get up there and just put the ball in play. Just try to keep hitting singles, and that’s all you have to do. And if you’re able to do that, you’ll do just fine.

So that is the end of my long answer to the question about a perfect setup, or an especially good setup. Okay, I hope everybody has a good night.