Al, what is your advice for a beginner trader for avoiding revenge trading and breaking our rules after we lose a few trades in a day?
Audio duration: 4min 43secs

Good advice for ALL traders

My thought: It doesn’t matter if you’re a beginner or if you’ve been doing this a long, long time. And it doesn’t matter if you’re consistently profitable. No matter how good you are, your edge is always going to be small, and if there’s anything happening with you emotionally or physically — if you have a terrible headache — if there’s anything that makes you less than your best, then whatever edge you have is less. And if your edge is small to start with, then your edge may not even exist with whatever problem you’re facing.

You worry about your kids; you worry about who knows — refinancing your house. If there’s anything going on that distracts you and makes you less than 100 percent objective, I think the best thing to do is not worry about it. So if you’ve lost a few trades earlier in the day and you’re thinking about those trades — you’re trading in the rearview mirror and you’re not paying enough attention to what’s ahead. So my advice is you just keep working on trying to be objective and just accepting the fact that you’re human, you have limitations — all of us have limitations.

Everyone has different limitations. I have my own set of problems and they affect me in ways that other traders may say, “Al, what are you — you’re nuts. You’re a crazy guy!” I might say the same about somebody else. Doesn’t matter. This is who I am. This is my package and these are the problems that I have. I’m always trying to get better, but this is who I am and I’m not going to worry about it. If I’m not at my best when it comes to time to take a trade for any reason — if it’s because I’m thinking about some losses, or some mistake, or college tuition bill coming up; it doesn’t matter — a sick aunt or uncle; it doesn’t matter. If I’m distracted, the best thing I can do is not trade and not feel bad that I miss trades. Not feel bad if I miss trades for two hours or if I miss trades for two days. It doesn’t matter. This is me. This is my package and the best I can do is trade within my own limits.

When I play tennis — I play tennis a lot — I’m playing against a guy and I start to get ahead — I always play doubles. But if we start to break the other team, even if the other team is better than us, a lot of times you’ll come across a guy who all of a sudden just starts hitting the ball as hard as he can. He tries to make every shot a winner, and what happens is he ends up losing faster. And the same thing is true with trading. You know what you have to do to win consistently and if you’re winning consistently, you do that, and if you start trying to do things that you don’t normally do, you will end up losing and losing faster. And like anything else in life, if you strike out — if you’re a professional baseball player and you struck out the last four times up, and now you just start swinging harder and harder and harder to get home runs, well, guess what? You’re going to strike out more and more.

If you’re a quarterback and you just threw an interception and your team is losing and you start getting desperate to win, you’ll start taking really low probability passes. And low-probability passes, you’re going to get intercepted more. Your receivers are going to receive — they’re going to catch fewer. So whenever you try going outside of yourself beyond what you’re really capable of doing consistently well, your probability of success is going to go way, way down. And your emotions will prevent you from managing those low-probability trades well enough to recover. So if you’re not feeling well or not feeling your best, if you’re not feeling happy, don’t trade. Just wait until you feel back to your normal self.

Yes! This trade will claw back all my losses! 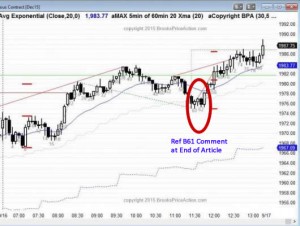 And the worst thing to do is look at a trade and say, “I know I lost three trades, but I know this is not a great setup, but I’m going to sell below 61 because this may turn into one of those huge bear trend days that we had a few weeks ago. I know it’s probably not going to happen, but if it does, I’ll make back all of my losses.”