Regarding scaling in, you often say traders scale in one point above or below and two points above or below. Sometimes you say scale in only when you get another good signal bar in the direction of your first position. How do you decide when you use which scale-in technique?
Video duration: 7min 26sec

How to decide when to use? 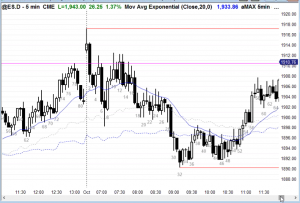 Yeah, you bring up a really good point. If I think the market is really range bound in a fairly tight range and not going very far, then I feel comfortable scaling in one point, two points. On the other hand, if I think the market is doing something that is a surprise … we had an example of that… you could argue over here, right… would I scale in one point below 28? I would not. Would I scale in below 22? I would. Why would I not scale in below 28? It’s a wedge bottom — one, two, three — and there’s too much risk of a bear breakout. So, in that kind of a situation, I would not scale in below 28. However, I know that some bulls bought above here, bought above here. This is probably not going to be a big bear trend day, and therefore scale in bulls will buy above 33, and therefore I am willing to buy above 33, thinking that there will be at least a 50 percent pullback on that.

A lot of times… see if I can find another example… a lot of times, especially in a trading range, where there are logical sells like here, you can argue that it’s logical to sell below bar 40. And if you do, where do you start to scale in? Do you scale in above 40? I don’t know. It’s a trading range, you could, but once you see that you’re going to be thinking it’s going higher. So had I shorted below 40 and had I scaled in higher, I probably would have gotten out on the 44 close. On the other hand, other bears will say, “It’s coming back to that 40 low and I’m going to scale in, but I’ll wait for a bear reversal bar and then sell below that bear bar. So I’ll sell below 46 and then either get out between my two entries, this low and that low, or I’ll hold for a test of 40 low.” I don’t know if we clearly got there.

So it depends on the circumstances. Usually, I’m much more inclined to scale in one or two points, one or two points and use a wide stop, but in a situation where I think there’s a possible breakout, I do not do the one or [two points scale-in]. And I talked about that over here. There was a potential for a bull breakout here. There was such an obvious short that there was a potential for a bull breakout, so I’m not going to sell above 30. Instead, I’ll wait and if it breaks out, then I’ll buy it, which I did.

I know I’m not being all that clear because it is very subjective. I think, in general, most traders who are scaling in should use the stop entry method. So if you buy and you’re looking to buy more lower, wait for a bull reversal bar. For example, if you buy — if you bought up here, let’s say you buy the 10 high, and you want to scale in lower, it’s better to buy above 13 and keep your stop below 8, than it is to buy and then buy two points down, two points down, two points down. So I think most traders should do it that way. In the new version of the course, I have an entire video about entering late in the trend, and I’ll be talking about that some in Las Vegas (November 2015) in a few weeks, but that is the basic idea. I think traders starting out, it’s dangerous to be scaling in at fixed intervals–one point, two point, and three or four points–and it’s better if they’re thinking of scaling in to do it with a stop entry for a second trade.

Let me try to find another example. So here, for example… let’s say you bought here, which you would not because odds were there was going to be a second leg down. Let’s say you bought 34 … the 34 high … I would not buy the 34 low or two points lower if I were starting out. I would buy the 34 high using my wide stop, and then when it reverses up above 41, buy above 41. And because I know that the institutions are doing that, a lot of times I’ll look at 34 and say, “Oh, that’s a bad buy,” but I know the scale-in institutions are looking for a good bull bar, 41, to buy so then I will buy above 41 or 42.

So a lot of times, you’ll hear me say that I’m buying, or that it’s a reasonable buy because the scale-in traders or institutions will take that buy. I’m not sure if I’m being all that clear, but bottom line: If you’re starting out, I think it’s risky to sell and then sell more two points higher, sell more at two points higher. It’s better if you’re looking to scale in, you sell, and if it goes higher, wait for a bear reversal bar and then sell below the bear reversal bar. So let’s say you sold the 16 close or below 16, don’t sell more here. You wait for that to sell and you sell below 21.

Okay, Al, I asked this question on Friday, but the audio was not clear so I’m posting it again. Regarding scaling in, you sometimes say scale in only when you have another good signal in the direction of the first position. How do you decide which technique to use? 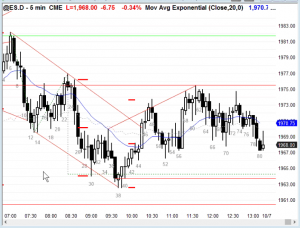 Let me give you an example, okay? Let’s say you bought the 47 close, right? And then you start seeing it sell off. Do you buy it one point lower, two points lower? No. We’re in a trading range so we can get a very deep pullback. So whenever there’s a reasonable expectation of a deep pullback, reasonable potential of a deep pullback, I’m not going to buy one point lower, two points lower. If I buy that close and I decide that I’m going to keep my stop down here, the next buy is going to be above a bull bar, bar 52, right?

On the other hand, if I’m buying what I think is a very strong bull breakout and I think the odds are high there are buyers below, then I will buy one or two points lower because I think the odds of a deep pullback are small. Same with selling. I’m just trying to find something obvious, like here. Here, I think this is a bull breakout. I think we’re Always In Long. And there’s an urgency to it; or here or here, there’s an urgency to it. So there, if I buy, I’m probably going to buy one or two points lower because I think it’s a breakout and the probability is high that we’re going higher, and that the pullback will be brief. If I’m buying in a trading range, I think there’s a high risk of the deep pullback and I’ve got to be really careful buying too high and scaling in too high. So if I’m buying here, I’m buying after the market has gone up 10 bars. That is high. So to me, I don’t want to be buying again here. If I’m going to be buying again, I want to buy it with a stop.

So I hope that makes sense. So in a trading range, I prefer a second entry on a stop. Usually, I don’t buy high in a trading range. If I do, I get out pretty quickly. And instead — in a situation like this — I say, “Huh, the scale-in bulls will be buying here,” so I start looking to buy, thinking that we’re probably limited in how far down we’ll go.

Here, bears sell this close. I’m going to be selling below bars or I’ll be selling somewhere in the middle, thinking that scale-in bears will — will be selling with stops.