Question 1: Will you talk about silver?
Video duration: 5min 21sec 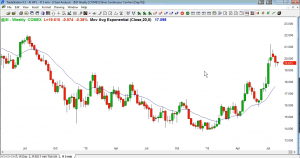 Momentum up on silver weekly chart

Weekly chart, still pretty good momentum up. Parabolic buy climax, one, two, three. If we start to get three or four consecutive bear bars – if we get this, three or four consecutive bear bars closing on their lows, traders will believe that we’re going to pull back, maybe to prior higher lows here or all the way here. Here on the monthly chart, the reversal up is probably a minor reversal. So traders will switch to lower timeframe charts, weekly chart, daily chart, and look for sell signals.

But to me, this does not look like a strong enough wedge bottom to be a major reversal. And this rally is pretty good, but I think the bulls probably need a pullback and then a higher low, and then a reversal up. So similar to what I talked about today on the 5-minute chart of the Emini.

Daily chart of silver, big, big buy climax, possible endless pullback, the bulls see a double bottom. I would not be position trading it until after the FOMC report. You can see everyone has lost interest over the past month. They’re concerned about that report.

But silver is similar to this. A wedge bottom and a very tight channel, so probably the first reversal up is minor. Silver has three pushes up, just like the 5-minute Emini has three pushes up. So it probably needs a couple legs down, and at that point it can form a major trend reversal.

Question 2: Do you think the wedge on the silver weekly today looks similar to the wedge from 2007-2008? 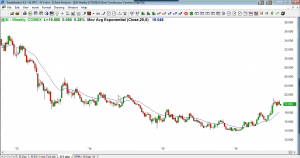 Let me put up silver. I virtually never trade silver, but my favorite idiot talks about silver every now and then, saying that he’s afraid to trade it because it’s so volatile. That’s just total nonsense. You just trade a smaller position.

It is, but will it stop the rally or will it keep going up? I don’t know. He’s comparing it to 2007-2008, where we had a buy climax and a big reversal down. That to me is one, two, three in a bull trend. This is right now a bear rally trying to become a bull trend. He’s probably talking about this in here and not one, two, three here. So in here, maybe three pushes up. No, right here. One, two, three, somewhere in here. He’s saying is this the same as this?

I look at it differently. To me I look at this as a consecutive buy climax in a bull trend. Higher risk of a couple legs down. Here, I look at this as a bear rally, a minor reversal, and the bulls probably will need a major reversal – which means that we go sideways and then test back down and maybe form a higher low or a lower low, even though this is strongly bullish right there.

Even though it’s a very strong bull breakout, you have to be suspicious that it’s just a bear rally. I don’t think we’ve had a major trend reversal on the weekly chart. Obviously on the daily chart, we’ve had its major, but on the weekly chart it’s minor, and on the monthly chart it’s nothing. It’s just moving average gap bars in a bear trend. I think that the upside is probably limited and that we’re going to have to test back down.

Monthly chart, it’s a bull breakout of a bear channel. Arguably a wedge, maybe a couple legs up, one, pullback, two. But moving average gap bars in a bear trend. I think the picture is confusing and not especially bullish. I would not be buying up there.

And here, strong breakout daily chart but a second entry short. Maybe we’ll get a second leg up from this, but I’m personally not buying up here. We’re at a resistance area. We were sideways here for about a year, so traders sold at this price, they sold, sold, sold. At this price, 22, 24, traders sold a lot several years ago. They’ll probably sell in that general area again.

Could not resist looking up, and posting current silver weekly chart. Traders can follow up on Al’s analysis of last July and August. Pretty good, eh?
Richard, BTC Admin