Question: When buying with limit orders, how does the probability need to play versus stop orders? 40 percent? 60 percent?
Video duration: 2min 32sec 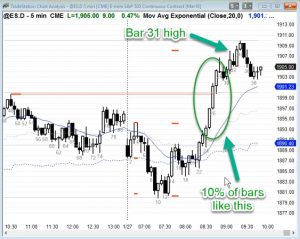 Well, it’s a little bit tricky. When I’m buying with limit orders, or selling with limit orders, I’m usually using a wide stop and scaling in. Therefore, my risk is big. You can only take a big risk trade if one thing is true, and that is that your probability of winning is true, and that’s what scaling in does. It gives you a much higher probability of winning.

If you look at the course, I tried to make it clear that 90 percent of the bars on the chart you can buy or sell at any instant, and make money. 10 percent of the bars on any chart look like this [B25-B27] and you really can only make money buying. But if you’re not in a situation like these three bars, at the end of the day, we’ll have three bars out of 81 where there’s a very high probability, much higher than 60 percent chance that we knew what the market was going to do next.

However, three out of 81 — that’s about 4 percent, right? A general rule is about 10 percent of the bars on the chart are high probability — 60 percent or higher that you know what the market’s going to do over the next few bars. But, 90 percent of the bars on the chart you’re never really that certain it’s below 60 percent, and sometimes it’s only 40 percent, so if you’re buying with a stop or buying or selling with a limit order or buying with a limit order, no matter how you’re entering, probability is just not as high as you want, and you can increase your probability by using a wide stop and scaling in.

Structure and manage your trade