In general nowadays, how much stress does trading bring into your life? And have you gotten less stressed in general as you developed to depend on yourself?
Audio duration: 3 min 47 sec — Scroll down for image

I love trading. Any time you take a trade, there’s at least some kind of a tingle going on. But I’m really peaceful all day long. I feel like I know every tick of the day what the market is doing, what the market’s trying to do. I don’t feel stressful, but I can tell you, 25 years ago, 15 years ago I used to just be so tied up in knots all day long, “Oh, I thought – it’s doing that. I thought it was going to do the opposite. It should have done the opposite. Oh, I took a trade, and I really need this trade to work. I lost three in a row. I can’t afford to keep losing like this.” I used to get really connected to the market emotionally as if my feelings could make the market do what I wanted it to do. Over time I just began to trust what’s going on. I feel really, really peaceful when I’m trading and very, very comfortable.

I feel like I know what the market’s doing at all times, and I feel like I’m always thinking it can go up, it can go down; I’m always thinking in terms of probability; I’m always thinking in terms of how far they’ll go. But it took a long time to get this way. I’m a very uptight, intense person. I don’t like that about me, but that’s who I am. I’m 63 years old; I’m not going to change, I just accept it. However, when I’m trading, for whatever reason, somewhere along the line I just became really peaceful, so if I see some crazy move, I say, “Oh, look – look at that it hasn’t done that in a couple of months.” I just don’t get upset about anything. It’s really good. It makes trading a lot more fun.

I just remember how stressed out I used to get, how upset I used to be, and how I used to feel like if I could generate enough feelings I could make the market do something, but, I’ve come to accept the reality. I’m competing against the French government, the Chinese government, JPMorgan. They have thousands of times more capital to trade than I have, so I can put my entire net worth on a trade and I might move the market a tick. I am really insignificant and therefore I can generate all the feelings that I want, it’s not going to change things. 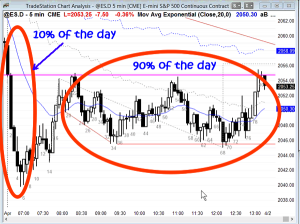 It’s easy to do something dumb. I’ve done millions of dumb things over my trading career. But in general you just trust that the market is going to make sense and it’s not going to do crazy things. And they make it sound on television as if the market’s doing crazy things. It’s not doing crazy things, it’s just doing logical things; it’s just constantly probing support and resistance. Sometimes it goes higher or lower than what you thought it was going to do, but it’s simply probing support and resistance. The sell-off on the open today – I did not think was going to sell off that much, but it did. It reversed almost all of it later in the day.

I hope that makes sense. However stressed you feel, I was at least that stressed 20 years ago, 25 years ago, 28 years ago, whatever. I don’t remember the last time I felt stress trading, but it went away. And now I’m really peaceful. I look forward to the market opening every day and I love being here.