Question: I bought the 17 close — okay, that makes sense — for a swing trade using a wide stop, then scaled in on the way down and took the loss. Okay.
Video duration: 7min 11sec 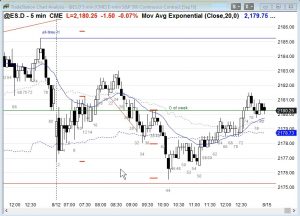 So my only thought is, I would not take that as a swing trade.

Q: Back to your question.  “I bought the 17 close for a swing trade using a wide stop, then scaled in on the way down and took a loss.”

My other thought about that is if you’re buying and you’re willing to scale in using a wide stop and you think the day is either a bull trend day or a trading range day, you have to be really patient and you got to use a wide stop, and — what’s a wide stop?  Sometimes it has to be 10 points or more if you’re buying at what might be the top of a trading range day. And I think that’s what the 17 high was.  So you would have had to use eight or a 10-point stop to avoid being stopped out. Which means you have to trade really, really small, assuming you held on the way down.

In a situation like that, if I buy that 17 close and then, you know, I see three or four bars, and I think we’re always in short, I’m just going to get out and take the loss.  I’m certainly not going to scale in, and if anything, I’ll try to get short for scalps on the way down.

Q: Okay, back to the question:  I then shorted bar 44 — okay — and scaled in when it was still on its low and repeated the same thing in the reverse direction as the market was climbing.  Okay.

And it’s probably going to be a bull leg in a trading range.  On the way down when you see a sell-off that looks like this [B25-29], where are the big consecutive bear bars closing on their lows?  Ah, you finally got them [B32-24], right?  But it’s the second leg down in what has been a trading range day. So it’s more likely that this is a second leg trap, especially since it’s right at support — yesterday’s low, measured move target.

You know, I understand; it’s easy to get excited.  You see the market finally breaking out, finally has the potential of a trend. But when most of the price action is trading range price action and you see a second leg that looks especially strong, yet it’s not breaking out above major support or resistance on the chart, it’s still basically within the range. You have to assume it’s a buy climax—a second leg trap, or a sell climax–second leg trap.

So — and it just takes a long time, I think, to get used to it because, the selloff 43, 44, it just looks so promising and then 16, 17, 18, you have a series of consecutive bull bars finally breaking out, it gets you hopeful.  Even though the bars are not big, but you have to just keep telling yourself, “Al says it’s probably going to be a trading range day so I got to watch out for second leg traps. And — which means I got to be really careful about buying strong breakouts at the top and selling strong bear breakouts at the bottom” because too often there’s just second leg traps.

Q: Okay, question:  Is buying below the 40 low for a scalp an acceptable trade?  And if so, how would you manage the trade?

A lot of times on trading range days, between 10 and 11 o’clock you get a strong breakout like that [B38/9], okay, and it looks like the day is turning into a trend day.  This is really, really common on trading range days.  It was a trading range day to that point and it tries to become a trend day, and — so if you’re buying for a scalp, what do you do?  How do you manage it?  Then you see three consecutive bear bars [B40-42], either you get out on the close of the third bear bar 42 or you get out below 42.  And guess what, that’s what happened on 43. A whole bunch of traders said, “Uh, I don’t like three consecutive bear bars. I’m getting out if we get a fourth bar in this pullback,” and that’s part of what caused 43.

Take the loss, get ready to trade again

So if I bought the 40 low looking for a scalp and then I got three bear bars — 40, 41, 42, 42 closing on its low, that warns some to get out one tick below 42. And that’s what everyone on the planet did over here, so everybody did that.  So for me, that’s the management.  And if anything, I’d get out here [B42 close], right?  I would be starting to think, “It’s probably a second leg trap. There are probably buyers below 34, probably buyers below 1. I’m going to get ready to look to buy either, above 45 a bull bar. And you got legitimate scale-in bulls here [B30], scale-in bulls here [B35], so we’ll probably get back to here [B35], maybe all the way here [B30]”. And the scale-in bulls will buy above a bull bar — they bought here [B48], right? So I would be looking again to buy.  I would get out. I would take the loss up here [B42] had I taken that buy. But I would be ready to buy again.