An extract from Al’s trading room today, in response to many requests for some insight into how room operates. You can find a one hour sample on the Learn to Trade/Trading room menu link above. A more recent sample of the room will be prepared in future to reflect Al’s evolving style. Let us know if you want more of these Ask Al room extracts. A longer extract is planned for this month or next.
Video duration: 5min 04sec

Bear flag? Or not? 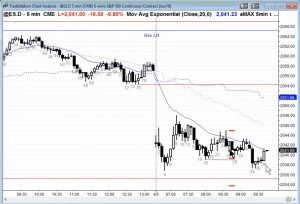 The target, whenever you’re in a bear channel, is each prior lower high, 1, 2, 3. This is also a type of a wedge. You have a double bottom bear breakout, so 3 pushes down — 1, 2, 3. So the double bottom creates the first two pushes. Then the failed bear breakout, the third push. The reversals up have just not been strong. Bar 20, bar 29, 31, 38, the bars are just not big enough, and they have not yet had follow through.

Bears. When you’re in a bear channel, the bears sell every close of every big bull trend bar, right below the moving average, at least for a scalp. So the bears are selling this. I’m currently flat but I’m more inclined to buy because 38 is a good enough reversal to make me think the bears lost control. But the bulls really have got to get above the moving average. So buyers or sellers below 38, 39? For the bears, it’s a swing sell for the bear channel. The bears should not have allowed 35, and they then should not have allowed 4 bars up. They should not have allowed 38 to close above the 37 high. So this is interesting, 39. Will the bulls get a gap? 39 low, 37 high. If they do, it would be a subtle sign that the bulls are taking control. 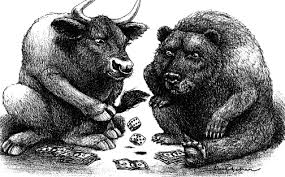 If you notice, I was starting to get a little bullish over here. And then I was bearish over here. And then bullish again. I don’t have any problems changing my mind. Sometimes I’ll change my mind several times, in the course of a minute. I just don’t have any difficulty with that at all. I just make an assessment of what is in front of me and then I decide whether it’s reliable enough for me to place a trade. If it’s not, I wait. Right now, I’m waiting. And I don’t view it as, “Oh Al. You’re so stupid! You thought it was becoming long on 31 and short on 34, and long on 38—you don’t know what you’re doing.” I don’t think of it that way. I think of it as the market is telling me it lacks direction.

How the day ended – A trading range day 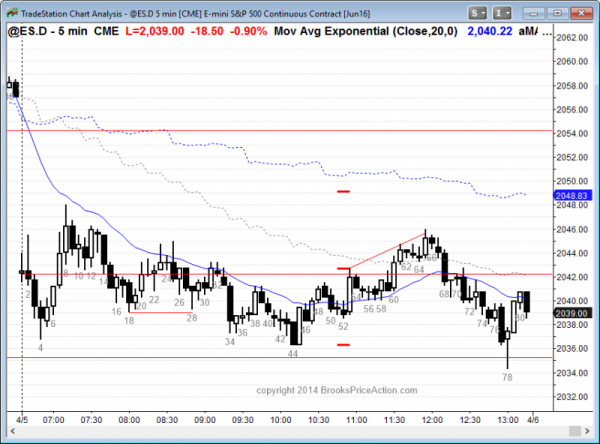