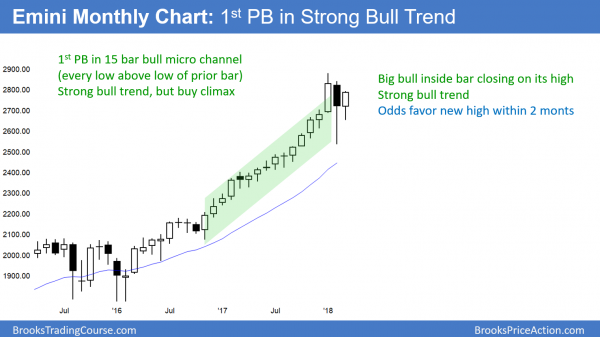 The monthly S&P500 Emini futures candlestick chart has traded sideways for 2 months after 15 months where every low was above the low of the prior month. This month so far is a bull inside bar closing on its high. However, this 2 month pullback might last at another month or two before there is a test of the high.

The monthly S&P500 Emini futures candlestick chart is inside of February’s range, which was huge. The odds are that March will remain an inside bar. If so, it will be a buy signal bar for April. The probability of a rally in April will be greater if March closes on its high.

While an inside bar after a big bear bar is also a sell signal bar, the odds are against a bear trend. Typically, the 1st pullback in a bull micro channel lasts only 1 – 3 bars. Then, the bulls create a rally that tests the old high.

Remember, the 1st pullback from a micro channel typically lasts 1 – 3 months. Therefore, the odds are against a 4 – 6 month correction. In addition, there is only a 20% chance of a bear trend on the monthly chart without at least a micro double top. That would require a test of the January high, which would probably take at least another 1 – 3 months. 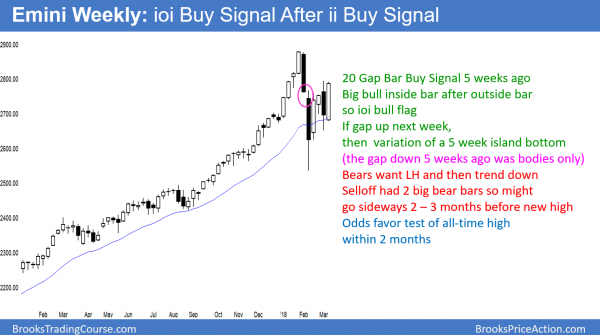 The weekly S&P500 Emini futures candlestick chart formed an inside bar after last week’s outside bar. This is an ioi (inside-outside-inside) pattern. Since it is the 1st pullback to the 20 week exponential moving average in over a year, the odds favor a bull breakout.

The weekly S&P500 Emini futures candlestick chart sold off sharply in February. The selloff fell below the 20 week EMA for the 1st time in over a year. Hence, the bulls were willing to buy above the average price for a long time. They are now getting an opportunity to buy down at the average price.

However, the 2 week selloff was extreme. Consequently, the bulls are uncertain about whether there might be a 2nd or 3rd leg down. If they can prevent another strong selloff, the bears will buy back shorts. Furthermore, the bulls will begin to buy. This will lead to a rally back up to the January high.

This week is within last week’s range. Hence, it is an inside week after an outside week. This is therefore an ioi pattern, which is a Breakout Mode setup. Because it closed on its high, it is a higher probability buy signal bar than sell signal bar for next week.

The bull trend is strong. This is the 1st pullback to the 20 week EMA in over a year. The ioi is just above the 20 week EMA, and it is therefore a bull flag. In addition, this week has a bull body. Furthermore, the ii from 2 weeks ago had 2 good bull bodies. All of this increases the odds of a bull breakout.

Last week was a bear bar, but it was also the entry bar for the breakout above the 2 week bull ii pattern of the 2 prior weeks. The stop for the bulls is below the 1st of the 2 inside bars. Since last week only traded below the 2nd bar and not the 1st, the weekly chart is still on that buy signal.

If next week goes above this week’s high, it would be an entry bar for a 2nd buy signal. It would therefore be a breakout of a High 2 bull flag in a bull trend. That is a reliable buy setup.

This week was a very big bar. This means that bulls will be buying next week above the top of a 5 bar tight trading range. The bars are big so the risk is big. Therefore, the risk/reward is less.

Also, a tight trading range is a limit order market. This means that in general, it is easier to make money buying below bars and selling above than entering with stops. Hence, buying with a stop above is lower probability. Consequently, while the buy sign is still good, it is less desirable than if this week was smaller.

Will a rally reach a new high?

Because the weekly chart is in a pullback in a strong bull trend, a test of the high is more likely than a bear trend. However, the early February selloff was unusually strong. After a Big Up January and a Big Down February, there is Big Confusion. Traders are uncertain if the Emini is about to resume up or sell off further.

When there is confusion, the Emini usually tests up and down. This is an attempt to determine if the bulls or bears are stronger. After such a strong selloff, many traders do not feel confident that the bulls have back taken control. That means that the trading range will probably continue for a few more weeks.

What about the High 2 bull flag?

It could easily trigger next week and lead to a 50 point rally, but then stall below the old high. A reversal down at that point could last several more weeks. The bears might drive the Emini down to around 2600. Yet, the odds still favor a new high before a break below the February low.

If there was a strong selloff to around the February low, the odds are that traders would buy it. They will buy it even if it breaks below the February low. This is because the monthly chart is in a strong bull trend. Consequently, the correction will probably not get much more than 10%.

Yet, it could grow in terms of time. A chart is made of price and time, and a pullback is a combination of both. The odds still favor a test of the old high within a couple of months. There is only a 30% chance of a bear trend on the weekly chart without first a test of the high.

The Emini gapped down on the weekly chart 5 weeks ago. While the gap closed that week, the bodies of the gap down bar did not overlap the body of the week before. That is a type of negative gap, and it is still a sign of strong bears. If next week gaps up, that would create a variation of an island bottom. That is a sign of strong bulls. However, it is not especially significant.

Daily S&P500 Emini futures candlestick chart:
Wedge top, but may get one more leg up 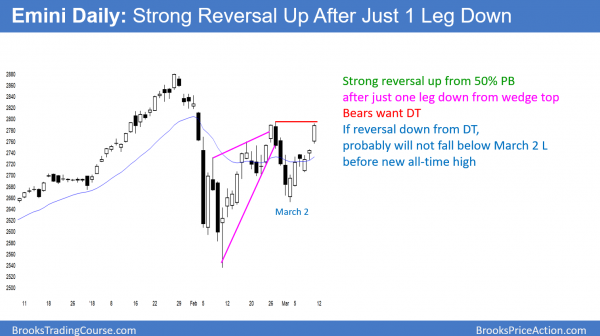 The daily S&P500 Emini futures candlestick chart has a wedge top. However, the 6 day rally has been strong. Therefore, rather than last week being the 1st of 2 legs down from a wedge top, it might be a pullback from the 2nd leg up in a bigger wedge.

This is especially true because the weekly chart has a buy setup going into next week. If that buy signal triggers next week, which is likely, the Emini will probably rally for 1 – 3 weeks. In addition, it will then go above last week’s high. If it turned down at that point, it would create a larger wedge lower high on the daily chart.

Wedge tops usually lead to 2 legs sideways to down

A correction down from a wedge rally typically has at least 2 legs down. In addition, the correction usually has about half as many bars as there were in the wedge. The current correction from the February wedge has fewer bars than what was likely, given the number of bars in the wedge. Also, the 6 day reversal up was stronger than the usual bounce up after a 1st leg down.

Given the buy signal on the weekly chart, it is now more likely that the 2 week rally is the 3rd leg up in a bigger wedge than a bounce from the 1st of 2 legs down from last week’s wedge top. This means that the rally will probably continue up to above last week’s high. It will probably test the February 27 high of 2794.75. This is the top of the wedge on the daily chart. If the bears can reverse the Emini at that point, there will be a 60% chance of a two legged pullback lasting 2 – 4 weeks.

The March rally has been strong. The March 2 higher low of 2652.00 is therefore a major higher low. If there is a selloff from around the February 27 high, it will probably form a double bottom with the March 2 low.

The bulls would see this as a double bottom higher low. The 2 reversals up in February were exceptionally strong. In addition, the monthly chart is in a strong bull trend. These factors make it more likely that the bull trend would resume up at that point to the all-time high than sell off to below the February low.

In conclusion, while the February selloff was strong, it probably has ended. If there is a strong leg down, it will probably form a double bottom with the March 2 low. Then, there will probably be a rally up to the all-time high.