The Emini rallied on the open and broke above the 60 minute moving average and the 50% pullback level. Yet, the 1st 2 bars had prominent tails and the 3rd bar was a small bar. This reduces the chances of a big bull trend day.

The bulls need to get above the top of Friday’s sell climax and Friday’s high. If they succeed, it would eliminate the bear argument of lower highs and an early bear trend. The bears obviously want a strong resumption down after Friday’s bear breakout. Yet, they still will continue to sell as long as the chart is making lower highs.

Because Friday’s high is so important, it is a magnet. It is therefore the target for any bull trend today. While the Emini is Always In Long and there is a target above, the initial rally lacks strength. Therefore today will probably not be a strong bull trend day. It will probably have at least one swing down or at least a couple of hours of sideways trading.

The most important price on the chart is 2168.00 because that is the open of the month and the odds favor a bear bar on the monthly chart. The Emini tested below it on Friday. While there is a 40% chance that the Emini has begun a 50 – 100 point pullback, there is still a 60% chance that it has not. Therefore the bulls will buy as they try to stop the bears from taking control.

Because the Emini has been in tight trading ranges for 2 months, more sideways price action is likely. Yet one or two big bear bars next week would make the correction more likely than not. The bears do not have to do too much to trap all of the buyers over the past 2 months.

Momentum Bulls will exit quickly on a bear breakout

Because these are momentum bulls, they will all quickly exit once the decide the momentum up has ended. As a result, the Emini could sell off sharply over the next few weeks. Yet, the selloff would probably become just a bull flag on the monthly chart. The next few days could create a dramatic change in the price action of the past 2 months. Traders need to be prepared for swing trades.

Black Swan is a bull breakout

Since the odds make a swing down more likely than up on the daily chart, the Black Swan outcome is a strong bull breakout to a new all-time high. By definition, this probably will not happen. A bull breakout would probably not go far before failing. Yet, when a Black Swan outcome appears, bulls get trapped out and bears get trapped in. As a result, the rally could go a long way.

The Emini is up 2 points in the Globex sessions. Because Friday reversed up strongly from a Lower Low Major Trend Reversal, the odds are that traders will buy the 1st selloff. Hence, traders expect either a trading range or a rally over the 1st few hours today.

The big tail on Friday’s low on the daily chart turned Friday into a trading range bar instead of a bear breakout bar. This means that the bears failed to get control and that the probability still favors a new high. Yet, if the bears can create a strong bear bar or 2 – 3 ordinary bear bars closing on their lows, traders will conclude that the correction has begun. 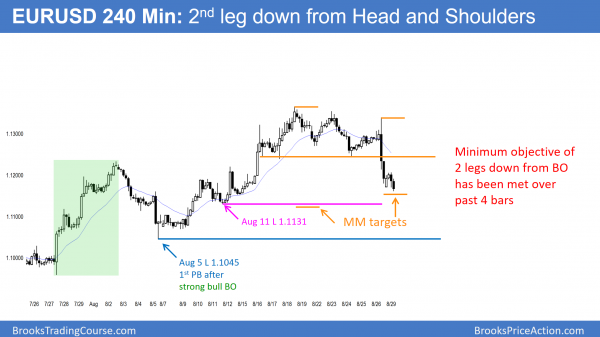 The 240 minute EURUSD chart broke below a Head and Shoulders Top on Friday. The minimum target is 2 legs down to support, like a prior higher low or a measured move target. The past 2 bars met the minimum requirement for a 2nd leg down. However, the breakout was big so there is typically a 60% chance of lower prices. The small 2nd leg is within a bigger 2 leg down pattern where the 1st leg is the move from the Head to the neck line of the Head and Shoulders top. This is important because the entire screen is a trading range. Therefore a big breakout like this is often a 2nd Leg Trap and the end of the move. Hence, there is at least a 40% chance that this bear breakout will fail and reverse up soon.

The EURUSD 240 minute chart broke below a Head and Shoulders Top on Friday (Lower Low Major Trend Reversal). Yet, because the entire screen is a trading range, the probability of a measured move down is less that the usual 60%. The EURUSD 5 minute chart has been in a 40 pip trading range overnight. While it has sold off for the past 6 hours, the selloff has had many overlapping bars with prominent tails. This is move common in a trading range or a Broad Bear Channel than in a strong trend resumption down. Although it an continue a long way down to the targets below, it is more likely going to begin to go sideways soon. It therefore will probably be a trading range day today. 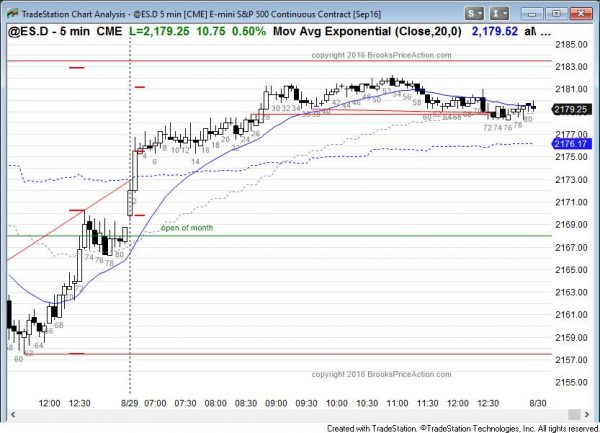 Today was a trend from the open bull trend day and a small pullback bull trend. It entered a trading range in the middle of the day.

Despite today’s rally, it failed to get above Friday’s sell climax. The bears see today as a bull leg in an early bear channel. A bear trend needs lower highs. The bulls therefore need the rally to break above Friday’s lower high to make the bears give up.

Wednesday is the last day of the month and traders are deciding whether August will close below its 2168.00 open. The Emini might stay in this area tomorrow and Wednesday and then decide in the final hour.

Friday’s unemployment report is a catalyst and it could being a move out of the month long trading range. The odds still favor the bulls. Yet, a bull breakout probably will fail between 2200 – 2220, and lead to a 50 – 100 point pullback.