The Emini opened with a big gap down, but there were no bear bodies in the 1st 5 bars. This lowered the probability of bear trend day. However, there were 4 dojis. This lowered the probability of a strong bull trend day. Dojis are small trading ranges, and this open increases the chances for a lot of trading range price action today. At the moment, the Emini is Always In Long, but the bulls need a strong breakout with follow-through. Without that, bulls will mostly scalp, and they will prefer to buy low. Pullbacks can be deep.

The bears need a series of bear bars or a big bear breakout. Without those, they will only sell high and mostly with limit orders. The Emini might go sideways for an hour or 2 until it gets closer to the moving average. The bears will look for a reversal down from a double top or wedge top. If there is a reversal down, bulls will look to buy a double bottom or wedge bottom. Stop entry traders in a breakout mode market want strong signal bars.

I mentioned yesterday that the daily chart of the Emini had a major topping pattern. I call it a small breakout of a small breakout. I said that the pattern needed the Emini to rally for a few days after Monday’s reversal up from its small breakout below the December 14 low, which was a small breakout below the November 16 low. Those 3 pushes down created a wedge bull flag. When there is a flat bull flag like this that tries to reverse up, but then trades below its bottom (Monday’s) low, there is a 60% chance of a measured move down, which would be a test of the August low area. The Emini only rallied 1 day, which might not have been enough to trap a lot of bulls. Because of this, the probability of the measured move down is probably less than 60%, but if there is follow-through selling for a day or two, the probability will be back to 60%. The bears need a strong bear trend bar today and at least a bear bar tomorrow. If tomorrow is also a big bear bar, the odds of a swing down would become greater than 60%.

The Stock market opens in less than an hour and the Globex market is down 36 points. Today has the potential to be a big trend day in either direction, and online day traders should not be in denial if one begins to unfold. Because this is another breakout attempt and 80% fail, the bulls will try hard to create a reversal up today. If the bulls are very strong, the Emini will not trade much below the open. The bears need a strong bear trend day. They will try to prevent the day from trading much above the open. They then hope for a strong bear trend day all day. They want the candlestick pattern on the daily chart to be a very big bear trend bar that closes near its low.

The Emini might disappoint the bulls and the bears by creating another trading range day. This would be better for the bulls than the bears because the bears need a strong bear day. Anything less lowers the probability that the breakout will be successful. If there are a lot of dojis and reversals in the 1st hour, the odds of a trend day in either direction will fall and the day will more likely have a lot of trading range price action.

Nothing has changed on the daily chart of the EURUSD. As long as the selloff holds above the December 3 low, the odds are that there will be a 2nd leg up. On the 240 minute chart, it broke below the neck line of a head and shoulders top. It might have a little more down, but it will still probably form a higher low. I mentioned yesterday that the selloff was in a series of consecutive sell climaxes and that yesterday would probably be a trading range day. The bulls now see the low of 6 hours ago as a higher low major trend reversal. The bears see the lack of a strong reversal up over the past 3 hours as a sign that the 2 day trading range is just another bear flag. The odds of a bear breakout are the same as for a bull breakout. However, a bear flag after a series of sell climaxes is likely to be the final bear flag before a reversal. This means that the odds are that any bear breakout will not go far before the 2nd leg up on the daily chart begins.

Because yesterday’s bear breakout on the daily chart was strong, the daily chart might have one more small push down. It might need a micro double bottom before it can turn up. Less likely, the selloff will break below the December 3 low. If so, it might fall for a measured move down based on the height of the yearlong trading range. 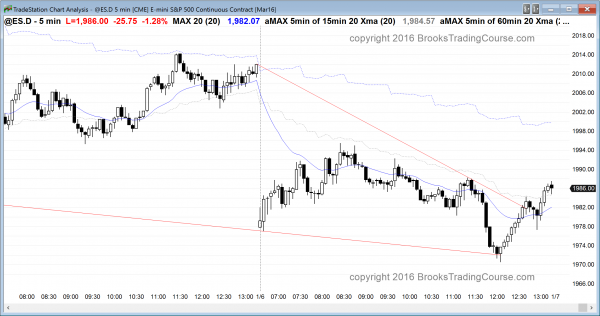 The Emini was in a trading range day, but reversed up at the end of the day and close above the open.

The Emini had trading range price action from the 1st bar. It traded up in a bull channel for 2 hours, and then down for 3 hours. After a sell climax, it reversed back up. The bears needed a much stronger bear breakout on the daily chart. While this reversal up today is not especially strong, it is a sign that the bears are not willing to sell too low. This increases the chances for higher prices over the next few days.