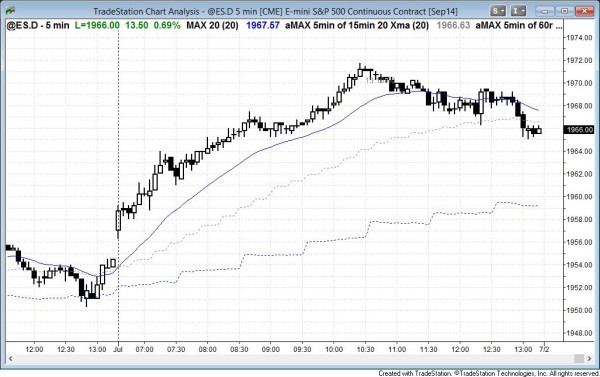 This chart was posted after the close and it shows a small pullback bull trend followed by a parabolic wedge top. The market closed one tick below the top of the weekly trend channel.

Posted 8:29 am PST.
The key feature in today’s intraday market update is the bull trend from the first bar. The Emini broke above the all-time high and is testing the top of the channel on both the weekly and 60 minute charts, which around 1966. There was a parabolic wedge sell signal that triggered at 7:25, but since there was only one bear body in the first 10 bars, this was a low probability short. This means that there were more likely buyers below. Most bears prefer to wait for a strong bear breakout or a better top because the probability becomes higher at that point.

The rally, especially since 7:30 am, had several small bars, prominent tails, and pullbacks, making it more likely part of a trading range rather than a bull trend. The trading range may be tight and sideways. If so, it might last 2 or more hours and be followed by either trend resumption up or a trend reversal down. If it does not have many bars, it could become a final flag. The bulls are hoping that the market trends up in a channel all day to above the top of the weekly channel.

By 8:25, the Emini is testing the 1966.25 top of the weekly channel. It is also around 8:30 am, which is a common time for reversals. The bulls became stronger and formed a small pullback bull trend over the past hour, which increases the chances that pullbacks will be bought and that the market will trade higher. At this point, the market will likely remain in a bull trend or enter a trading range.

There is not enough selling pressure yet for a bear trend to be likely today. Since the market is at the top of the weekly channel, traders should be ready to short if there is a reversal down, especially late in the day.