The Emini gapped up above the moving average on the open. This is a moving average gap bar. Consequently, if there is a selloff down to yesterday’s low, there will probably be a major trend reversal attempt.

Since yesterday was a big outside day, there is an increased chance of today being an inside day. As a result, the bulls will probably try to create a reversal up from any selloff near yesterday’s low.

While the early bear bars make the market Always In Short, the bears should not have allowed a big gap up. This creates a Big Down, Big Up open. Since that means confusion, it makes an early trading range likely. Furthermore, it increases the odds that a selloff to near yesterday’s low will reverse up.

Since yesterday’s bear channel had many prominent tails in the final 3 hours, there is an increased chance that the channel will evolve into a trading range today. This means that the first move up or down today will probably reverse within a couple of hours.

The daily chart is still in bull trend, or at least a bull leg in a trading range. The rally, though, has had 3 legs up in a tight bull channel. That makes it a parabolic wedge buy climax. In addition, the Emini sold off yesterday from a wedge lower high major trend reversal on the daily chart. Finally, the selloff closed the gap up on the daily and weekly charts. Consequently, the Emini might trade down for a couple small legs over the next week.

The bears want a gap down today. That would create a 2 day island top on the daily chart. Hence, it would be a sign of bear strength.

The rally has been strong enough so that the bears will probably need at least a micro double top over the next few days before they can create a strong swing down. Even if they succeed, the odds are that the selloff would form a higher low on the daily chart. In addition, there are probably buyers below the February low.

Yesterday provided useful information. Because the Emini reversed down strongly from resistance, the odds of the rally going straight up to a new high are less. The odds now favor a continued trading range over the next month.

Last day of the month

Today is the last day of the month. The open of the month is too far above for the bulls to get there today. January’s low is too far below. The odds are that the month will close today with a small bear body and a big tail below.

The Emini is up 4 points in the Globex market. Because yesterday was a sell climax day, there is a 75% chance of at least 2 hours of sideways to up trading that begins by the end of the 2nd hour.

Yet, if today is another strong bear trend day, traders will conclude that there will be a couple legs down over the next couple of weeks. 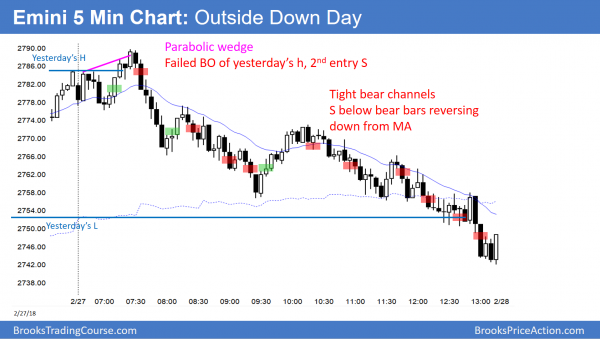 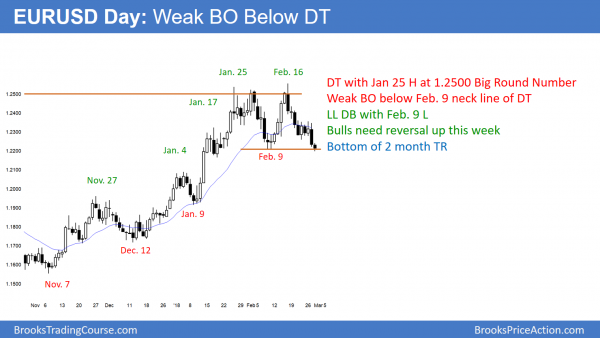 The EURUSD daily Forex chart broke below the neck line of a 2 month double top. The bulls want a reversal up from a failed breakout below the 2 month trading range. That would create a lower low double bottom with the February 9 neck line of the double top.

Last night, the EURUSD daily Forex chart broke below the February 9 neck line of the 2 month double top. Therefore, the next few days are important. Will the breakout succeed or reverse back up?

If today becomes a big bear day and then tomorrow is also a bear day, traders will conclude that the breakout will be successful. They will then look for a 300 pip measured move down to around the January 9 low and 1.1500. That would also be below the top of the 2015 – 2016 trading range, which is the next major support.

On the other hand, breakouts below and above trading ranges are common, but most fail. Markets have inertia. This means they resist change. Therefore, trading ranges resist breaking into trends (and trends resist reversing). For traders to conclude that this breakout is failing, the bulls need a reversal back up over the next few days.

The January rally is the 3rd leg up in a wedge bear flag on the monthly chart. The 1st leg up was the May 2016 high. Since the monthly chart is still in a bear trend, the bears want a selloff to the bottom of the wedge, which is the 2017 low at around 1.0350. At the moment, that is unlikely. Furthermore, it is so far below that it would probably take more than a year to get there.

The EURUSD 5 minute chart broke below its 4 day bear flag yesterday. Yet, there has been little follow-through selling overnight. The bears are not aggressively selling below the neck line of the double top on the daily chart. This is evident by the 40 pip trading range of the past 6 hours.

Because the daily chart spent 7 days at this level in January and 3 days here in early February, traders think this is an area of fair value. Consequently, the market will probably go sideways around 1.2200 for a few days. It will then decide between another leg down, which would a continuation of the breakout, and a reversal back up.

Since reversals are more common than successful breakouts, the odds favor a 200 pip rally within a few weeks. Therefore, the bulls will look for a buy setup on the daily chart or for a strong reversal up on the 5 minute chart.

Yet, there is a 40% chance of a swing down. The bears will look for rallies to sell, or they will sell a strong bear breakout, like they did yesterday. Since the breakout is stalling in a support zone, the odds are that today will be a small trading range day. 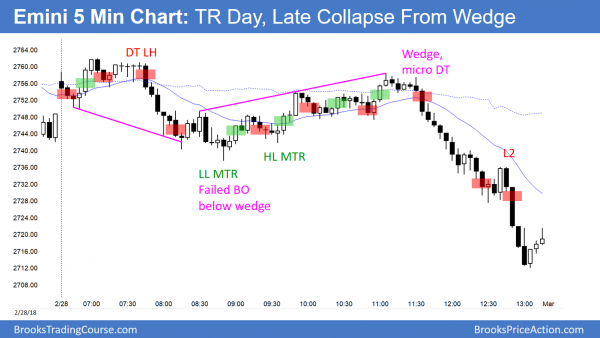 Today was a big bear day and therefore a good follow-through bar for the bears. It increases the odds of at least 2 legs down over the next week. Furthermore, this week might trade below last weeks low. That would create an outside down bar on the weekly chart.