Because today might be a 2nd inside day, traders sold the early test of yesterday’s high. This was a lower high major trend reversal, but there was no good sell signal bar and no strong bear breakout.

The bulls want to get above Thursday’s high because it is a lower high in an early bear trend. If they stop the early series of lower highs, then the bear trend will be over. Traders will then believe that there would be an increased chance of reaching the 2200 targets above. The bears obviously want more lower highs and lows, which would eventually make the bulls give up.

While the Emini is still Always In Long from yesterday, it is in breakout mode. The bulls need a strong breakout above yesterday’s high and Thursday’s high. If they get it, then August will probably end with a bull body, making it the 7th consecutive bull trend bar on the monthly chart.

The bears need a strong bear breakout below the 60 minute moving average. If so, the Emini would therefore test yesterday’s low and be close enough to the August open so that the bears might get a bear body on the monthly chart.

Yesterday was an inside day and it therefore it is a signal bar for the bulls and bears. Because the past 3 days formed an ioi candlestick pattern, the Emini is in breakout mode. Yet, it is in a month long tight trading range. Hence, that reduces the significance of breakout setups because it is a limit order environment. There are more likely sellers above and buyers below. Therefore, the Emini will probably be mostly sideways again tomorrow.

Because the daily chart is in a bull trend and holding above the moving average, the odds still favor at least one more new high. Yet, the stops are far below on the daily chart, and most of the buyers over the past 2 months were momentum bulls. Therefore bulls will probably take profits soon. When they do, the selloff could be quick because the momentum bulls will sell out as they try to avoid a loss.

The Emini is down 1 point in the Globex session. It traded in only a 4 point range overnight, and extended the trading range from yesterday. Hence, today could be a 2nd consecutive inside day. This would be a sign of neutrality going into tomorrow, the last day of the month. It is about 10 points away from the open of the month. It therefore has been unable to escape the gravitational pull of the open. Hence, it is still deciding whether the month will have a bull or bear body when it closes tomorrow. 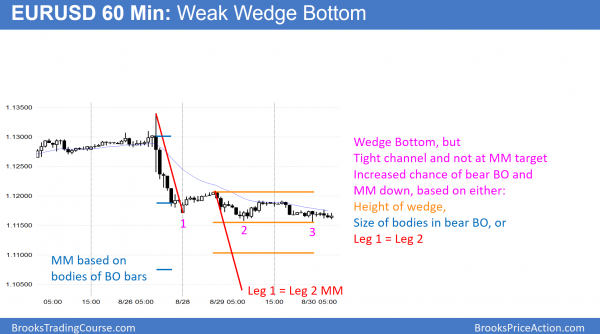 The EURUSD 60 minute Forex chart has a wedge bottom after a strong bear breakout. Yet, the wedge is in a tight bear channel and it has not reached a measured move target. Any reversal up will probably be minor, which means that it would probably create a trading range instead of a bull trend.

The wedge bottom on the 60 minute chart is weak because it is in a tight bear channel. Consequently, it does not contain big bull swings, which would be a sign of strong buying.

The overnight EURUSD Forex market traded mostly in a 20 pip range. The US session will probably be a little bigger, but the odds are that today will be a small day and day traders will mostly scalp.

Yesterday had a bull body on the daily chart, and therefore was a buy signal bar for the failed bear breakout. Friday’s breakout was big enough on the daily chart so that the odds are that the bulls will need at least a micro double bottom before they can reverse the bear breakout. Hence, the EURUSD Forex market will probably be mostly sideways for at least a couple more days.

The bears are hoping that Friday’s breakout is a measuring gap. They therefore want a measured move down, which would be around the August 5 low of 1.1045. While they might achieve their goal, yesterday’s bull body make a couple of sideways days likely. 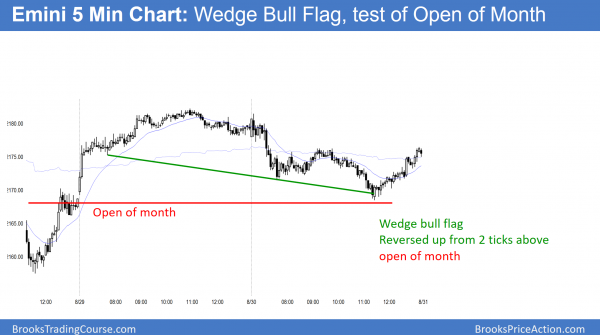 The Emini sold off in a Spike and Channel bear trend. It reversed up at 2 ticks above the open of the month from a 2 day wedge bull flag.