The bears got follow-through selling on the open. The chance of a big bear trend day is 25%. There is still a 75% chance of at least a 2 hour trading range that starts before the end of the 2nd hour.

When there is a Sell The Close open after a big sell climax, the selling usually ends after about 5 bars. The Emini then begins to base, and a trading range usually begins to form.

This initial selling has been strong. The 1st reversal up will probably be minor and the bears will sell it. However, the odds are that it would then form a double bottom and begin to form a trading range.

Bears who are selling here have to be prepared for a reversal up, especially after a double bottom. It is too early to buy. It will be higher probability to buy after a good double bottom with a strong buy signal bar or after a strong reversal up. There is a 75% chance of this coming, but there is no sign of it yet.

The daily chart still probably has to test the July high one more time before a correction down will begin. I have been writing for over a week that there was a 90% chance that the weekly chart would have a pullback within the next few weeks. Yesterday fell exactly to last week’s low and therefore did not yet create that pullback. If today trades one tick below yesterday’s low, the objective will have been met. If it does not, next week will start near this week’s low, and there will be about a 70% chance of a pullback next week. If it does not come, then there would be a 90% chance of a pullback in the following week.

Yesterday was a bear breakout on the daily chart. Because of the big tail on the bottom and the close above the support of the moving average, it was not a strong breakout. When there is a problem with a breakout, the bears can erase it with a strong follow-through bar. Today is their chance. Usually when the breakout is bad, the sell signal candlestick pattern is bar (Wednesday was a bull bar), and the breakout was bad, the breakout is a leg in a trading range and not a leg in a bear trend. The bears need a very big bear bar today or Monday. This is not likely, but if they get it (a big Give Up bar that shows the bulls giving up), it could result in a test to the bottom of the April Final Bull Flag in the 2030 area, or even a measured move below it.

The bull micro channel is a sign of an overbought market. It is also a sign of strong bulls. This means that a dip below the prior week’s low will probably be bought and the best the bears will get initially is only a small trading range. However, when there is a micro channel late in a trend that has a pullback, the bull trend resumption usually only lasts a few weeks before a trading range unfolds. So the upside is probably limited as well for a few weeks.

Today is the last day of the month. The month has a bull body, but it is small and there is a tail on top. This is not a strong breakout to a new all-time high. The most important nearby monthly support is last month’s high of 2064.50, which is 3 ticks below last week’s low. Both are magnets, especially at the end of the day.

The sell climax yesterday has a 50% chance of follow-through selling in the 1st 2 hours today. If the bears get it, they will probably trade below last week’s low and last month’s high. However, the strong reversal up from the double bottom at the end of the day might have marked the end of the selling, and today could be an inside day.

There is only a 25% chance of a strong bear trend today after a big sell climax. There is a 75% chance of at least 2 hours of sideways to up trading that starts within the 1st 2 hours. It probably began with the double bottom in the final hour yesterday.

With support just below and a quiet overnight market, today might be an inside day, and it most likely will have both a swing down and up. It is impossible to know which will come first. The selling was strong enough to limit the upside, and the bounce at support was probably enough to limit the downside. A lot of trading range price action is likely. 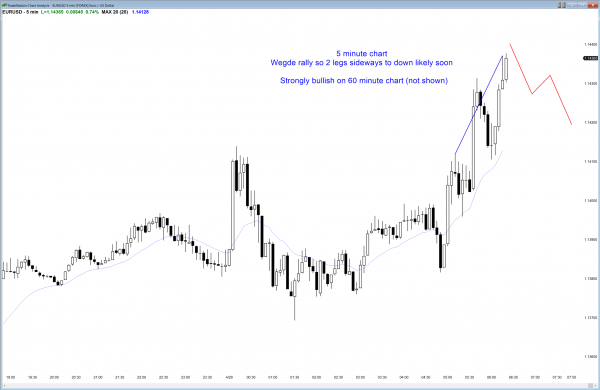 The EURUSD rallied overnight and broke above the April 21 lower high. That was the right shoulder of a head and shoulders top on the daily chart. The bears still might get a double top with April 12 high of 1.1464, but with 5 consecutive bull bars on the daily chart and a breakout above a top, the odds are that the best the bears can get over the next few days is a small trading range.

The monthly chart last month was a big bull trend bar, but it did not get above the 20 month moving average. This month so far has a bull body, but it is a doji bar and it is at and not far above the moving average. The bulls need a very strong breakout above the moving average or 3 – 4 consecutive moderate bull trend bars before traders will believe that this is the start of a swing up. They want a breakout above the August neck line of the double bottom and then a measured move up. It is more likely that any test of that high will form a double top bear flag and be followed by another leg down.

The weekly candlestick patter is a big bull bar at the top of a 5 bar tight trading range and following 3 bear bars. The bulls need a strong breakout above. Otherwise, the entire rally from the December low is just a wedge rally in a yearlong trading range.

The 240 minute chart has had lots of broad channel trading up and down. It is currently in a broad bull channel since the March low. In a broad channel, bulls take profits around and above the last high. The EURUSD is testing this area now. The bears also sell, expecting the bull breakout to fail. Until the bulls are able to get a strong breakout above a prior high, both the bulls and bears will assume that the pattern of pullbacks after breakouts will continue. Past breakouts rallied about 100 pips above the prior high before the pullback began. The prior high is the April 12 high of 1.1464. If the bulls get their 100 pip breakout, the odds are that there will be a pullback back below that level.

The past 5 hours have been strongly up. This is climactic and therefore a trading range is likely soon, but it is also a sign of strong bulls and they will probably by any 50 pip pullback for at least a test of the prior high. Since the EURUSD Forex chart is testing the April 12 high, it is a logical area for a trading range.

The rally over the past hour on the 5 minute chart has contained 3 buy climaxes and is therefore a wedge top. This is likely to be followed by a 2 legged pullback and a trading range over the next hour or two. 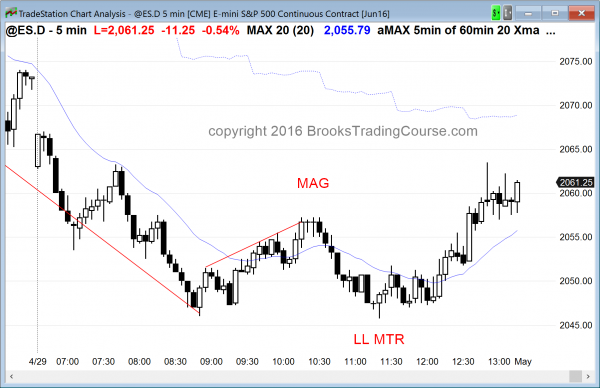 The Emini had follow-through selling for the 1st 2 hours and then entered a trading range for several hours.

The Emini had strong follow-through selling after yesterday’s sell climax, like it does 50% of the time. It then entered a trading range for hours, as it does 75% of the time. Because the daily chart did not have a strong sell signal bar and yesterday had a big tail (weak entry bar), and today also had a big tail below (follow-through bar), the odds are against a big bear trend. However, a strong reversal down from major resistance will probably result in a trading range for a week or two.

The monthly chart held above the open of the month and ended up with a bull body. It is still a sell candlestick pattern for the failed breakout above the July all-time high, and May will probably fall below the April low to trigger the sell signal. However, there maybe more buyers below.

The weekly chart fell below last week’s low, but the 1st pullback in an 11 bar bull micro channel is usually bought. This means the the best the bears will probably get over the next week is a small trading range