The Emini daily chart had an ioi Breakout Mode pattern on Monday. The Emini broke to the downside on Tuesday and to the upside on Wednesday. The bulls still have the problem of too much risk. Their stop is still 100 points below. Many cannot risk that much. The easiest way to reduce risk is to take partial profits and reduce the position size. Although yesterday had a strong rally, many bulls will use rallies like that to take profits. The odds are that yesterday’s rally will still be part of the trading range that began with last week’s start of the ioi candlestick pattern.

The Emini is clearly in a strong bull trend. Hence, it is always easier to make money as a bull. Even though many firms will take profits on rallies this week, if there are more firms buying, the rally will continue. Trends usually go much further than what seems likely. Just because the logic and therefore probability favors profit taking does not mean that there will be much. This rally could go much further before there is more than a 3 day pullback, yet that is unlikely. The odds still favor a trading range for at least a few more days.

Pullback within a week

As I have been saying, the odds of more than a few more days up are less than the odds of a few days down. The stops are simply too far for the bulls and they will probably use any rally to reduce their position size. This will probably result in a 30 – 40 point pullback over the next week.

The bears want the pullback to grow into a Final Flag Reversal on the daily chart. The bulls will buy it, seeing it as a test of the breakout above the 2 year trading range. The 6 week rally has been strong enough to make the bull case more likely. Yet, the probability is only about 55% because the monthly chart is so late in a bull trend. 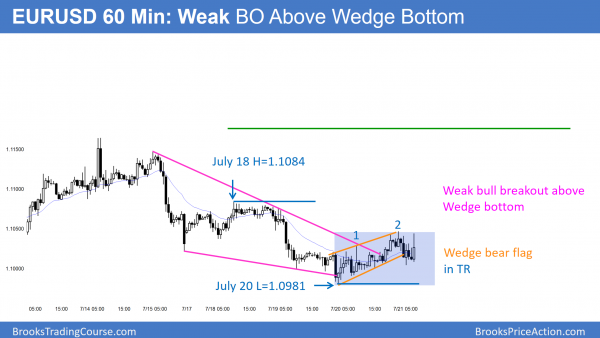 While the 60 minute EURUSD Forex chart broke above a wedge bottom, the rally has been weak. Because it has 3 pushes in a bull channel, it is a bear flag. There is a 50% chance of a breakout and measured move up or down.

The EURUSD daily chart is still in its month-long tight trading range. Yesterday was a test of the bottom of the range. The bulls got a small reversal up. However, the rally was a almost flat bull channel on the 60 minute chart. A bull channel is a bear flag. Once a bear flag gets 20 bars like this, the probability of a bull breakout is the same as it is for a bear breakout. The bulls need to get above lower highs to convert the bear trend into either a trading range or a bull trend. Yet, there is no evidence of which direction will prevail. 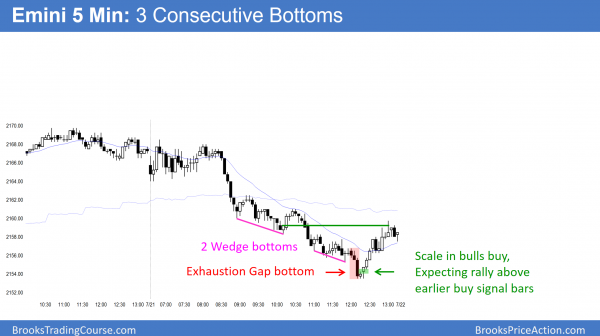 The Emini sold off in a Spike and Channel bear trend today. After consecutive wedge bottom attempts and then a sell climax bottom, the bulls finally got a reversal at the end of the day.