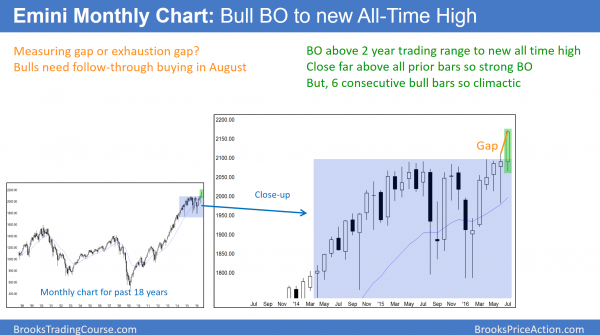 The monthly S&P500 Emini futures candlestick chart had a big bull trend bar closing on its high. The gap is the space between the close of this month and the high of last month. This is a strong bull breakout. However, it is the 6th consecutive bull bar and therefore a buy climax.

The monthly S&P500 Emini futures candlestick chart is breaking above a 2 year trading range. July was a big bull trend bar closing on its high. It therefore is a strong bull breakout bar.

August is important. The bulls need follow-through buying, which consequently would validate the bull breakout. Hence, it would increase the chances of higher prices over the coming months. The bears want a bear bar and therefore a potential failed breakout. The bulls have 6 consecutive bull trend bars on the monthly chart. While this is a sign of strong bulls, it is rare and therefore unsustainable. Hence, it is a type of buy climax.

The odds are that August will have a bear body. Because the bulls are strong, the first reversal down will probably be bought. Therefore, the downside risk on the monthly chart is small. The best the bears probably will get is a 1 – 3 bar (month) pullback. 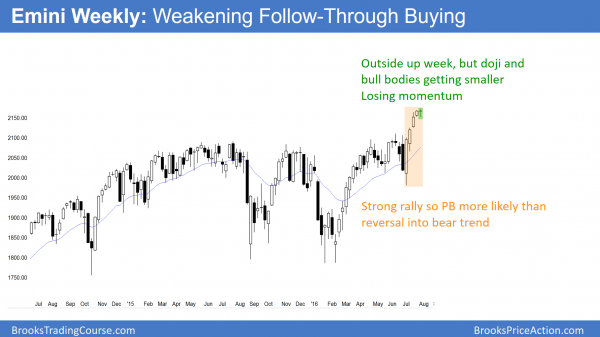 The weekly S&P500 Emini futures candlestick chart formed an outside up bar this week. Yet, it was only a doji bar. Furthermore, it is the 5th consecutive week where the bull bodies have been shrinking.

The weekly S&P500 Emini futures candlestick chart formed an outside up bar this week. However, it was only doji candlestick pattern and not a big bull trend bar closing on its high. While this comes after 4 consecutive bull trend bars, the bars have been getting less bullish. The bodies are shrinking. As a result, traders see the momentum decreasing. Consequently, there is a 60% chance of a pullback within the next 3 weeks.

Because this week was a small sideways bar in a bull trend, it is a buy signal bar. Yet, it was a doji and the momentum is dissipating. As a result, if next week goes above this week’s high and triggers the buy signal, bulls will be quick to take profits. Limit order bears will probably begin to sell above bars, betting that the buy setup is weak. They expect a pullback within the next few weeks and will begin to sell strength for scalps.

As a result of a weak buy setup, the odds are against a strong move up without a pullback. However, the Emini will probably trigger the buy and go at least a little higher.

The potential Black Swan is a big bull breakout, which would create a potential measuring gap. If the bulls are surprisingly strong, traders cannot be paralyzed by the unexpected happening. Never question what any market is doing. If it goes up, look to buy. If it goes down, look to sell. 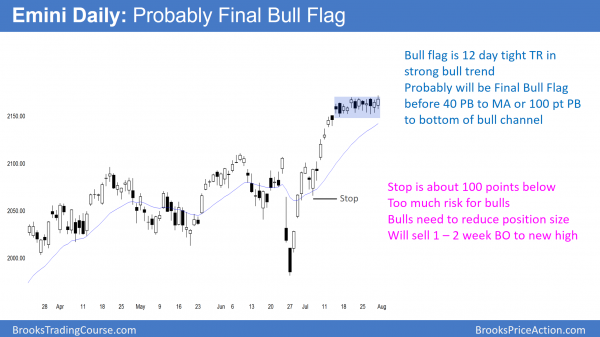 The daily S&P500 Emini futures candlestick chart broke above its 12 day tight trading range on Friday. The breakout so far is small.

The daily S&P500 Emini futures candlestick chart has been in a tight trading range for 12 days. While today broke above the range to a new all-time high, the Emini soon reversed down. Hence, the bull breakout was not strong. Because the tight trading range is in a bull trend, the odds favored a bull breakout. That breakout began on Friday. As a result, the Emini might trade up for another week or two. Yet, the rally will probably fail.

The stop for the bulls is still about 100 points below. Many institutions cannot tolerate that much risk. Hence, they will look to reduce their position size. This means that bullish institutions will start selling to take profits. Due to the bulls selling in addition to the bears who are always selling, the Emini will pullback soon.

If there is a rally, how far up will it go? A minimum target is a 12 point measured move up, based on the height of the 2 week tight trading range. If it breaks above that, the next target is the 2,200 round number. If the bears get a strong bear breakout, that could be the start of the pullback. Because most trading range breakouts fail, the odds are that the bulls will buy bear breakout. As a result, the bulls will then probably get their final rally before the pullback begins.

The July reversal pulled back on July 6. The 2065.75 low was the start of the 2nd leg up after the bull breakout (bull spike). While the leg was strong, it was also a type of a parabolic channel in a Spike and Channel bull trend. Hence, it is a magnet.

Will the Emini reverse all of the way there in August? Although the top of the 2 year trading range at around 2,100 is support, this July rally was extreme. An extreme move is unsustainable and therefore climactic. As a result, the pullback might be more than 2%. A 2% pullback is 40 points. A test of that low is about 100 points and 5%. 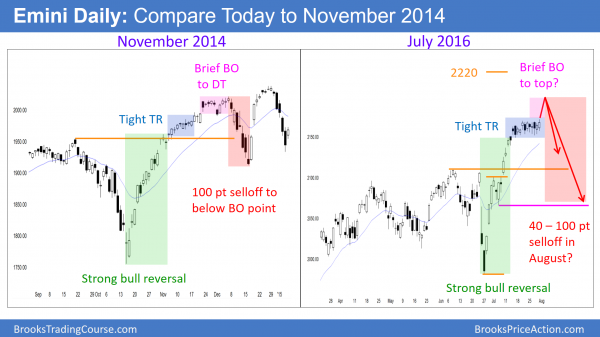 While the Emini probably will not follow 2014 exactly, 2014 illustrates the concept. When the stop is far below, the Emini has an increased probability of a deep, fast selloff. The selloff will probably be 2 – 5%, which is 40 – 100 points.

The Emini formed a similar chart pattern in 2014. It rallied strongly in October and then entered a tight trading range for 5 days until November 17. The bull trend resumed for a few weeks, formed a double top, and reversed down 100 points. The selloff fell far below the breakout point, which traders thought should have been support.

Chart comparisons like this can mislead traders. I am not saying that the Emini will do the same thing in August. I am using that 2014 rally as an example of what might happen when the stop is far below. It shows that this kind of buy climax can quickly reverse 100 points down. The odds are against that, but there is a 40% chance of it happening. There is a 60% chance of at least a 40 point pullback over the next few weeks.

While crashes on the 5 minute chart come a couple of times a week, and almost daily on the 1 minute chart, crashes on the daily chart are rare. I have been trading for 30 years and have seen some surprisingly big selloffs in August and October. The odds are high that August will correct down. The selloff might be fast, scary, and far. Yet, traders will correctly see it as a pullback in a bull trend and they will buy it.