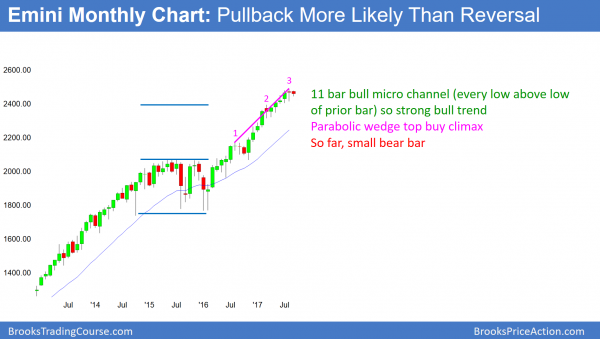 The monthly S&P500 Emini futures candlestick chart has not pulled back below the low of the prior bar for 10 months. This is therefore an 11 month bull micro channel.

The monthly S&P500 Emini futures candlestick chart’s behavior is unsustainable and therefore climactic. Each of the past 10 months has had a low above the low of the prior month. This is therefore an 11 bar bull micro channel. It is a sign of strong bulls because it means they have been so eager to buy that they have not even waited for a pullback. Consequently, they will be eager to buy below the low of the prior bar when they finally get the opportunity. As a result, the odds are that there will be buyers below this month’s low.

However, because the rally is so extreme, the 1st pullback might last 2 – 3 bars instead of only 1. In either case, the chance that the 1st reversal down will lead to a trend reversal is small. The best the bears can probably get over the next several months is a pullback. This means a bull flag. The odds are that the bears will need at least a micro double top before they can get a pullback lasting more than a few bars.

The rally from the January 2016 low has had 3 legs up in a tight bull channel. It is therefore a parabolic wedge top. Yet, instead of reversing, the bull channels has continued to grow.

The 4 month rally through February was a breakout. It therefore might have reset the count for bears looking for 3 pushes up. As a result, it could be the 1st of 3 pushes up in a new parabolic wedge top. Because that rally was a breakout, the pattern would also be a Spike and Channel bull trend.

Yet, until there is a reversal, there is no reversal. Furthermore, because the channel is so tight, the 1st reversal down will probably become a bull flag. Consequently, the odds of a bear trend beginning within a few months are small. The most the bears will probably get is a test of the 1st pullback after the breakout. That means a test of the March low. This would therefore be about a 180 point correction. If it were to occur, it would probably lead to a trading range for 10 or more bars (a year). However, a 180 point correction would be a bear trend on the daily chart.

Whenever a market does something unusual, it is unsustainable. The odds favor a pause. Consequently, although the 11 bar bull micro channel is a sign of strong bulls, it is also a buy climax. While it can grow more, 11 bars is unusual enough to make a pullback likely within the next few bars (months).

Can the reversal down grow into a bear trend instead of a bull flag? There is only a 30% chance of that happening without at least a micro double top first. Since the bulls know that, they will buy the first selloff. However, once the bull trend resumes, traders will pay attention to what happens at the old high. Will there be a strong bull breakout, or a reversal down? If there is a strong breakout, it will probably only last 1 – 3 bars. This is because the extreme buy climax will probably need 5 – 10 bars of sideways trading before the bulls will aggressively buy again.

What about the 30% chance of an endless pullback that grows to so many bars that it converts into a bear trend? That usually takes 10 or more bars. In addition, the bear trend begins as a bull flag. Consequently, the 1st 10 bars are usually mostly sideways to slightly down. It is a bull flag! After about 10 – 20 bars, the bears become confident and the bulls start to worry. If the bulls give up, the bears can get a strong bear breakout below the bull flag. This therefore can become a bear trend without there ever being a small double top. 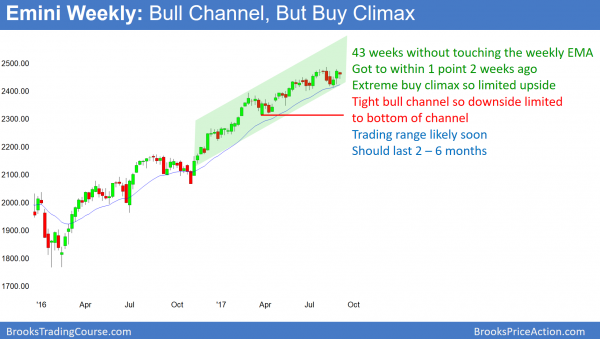 The weekly S&P500 Emini futures candlestick chart has been above its 20 week exponential moving average for 43 weeks. The bears have been making money by selling above prior highs for 8 months. Consequently, the bull channel from the March low will probably soon evolve into a trading range.

While the weekly Emini chart has not touched its weekly moving average for 43 weeks, it got to within 1/2 point 2 weeks ago. This provided some relief from this extreme buy climax. However, that is probably not enough relief for the exhausted bulls to buy aggressively again soon. They usually want about 10 bars and 2 legs sideways to down before they will try to buy again for another leg up. The buy setup is usually a High 2 or wedge bull flag. They need to give the bears the chance to reverse the bull trend.

If the bears fail after a couple of attempts (2 legs sideways to down), the bulls will regain confidence and buy again. They will bet that the bears will step aside and not try for another top until after at least a couple of legs up. 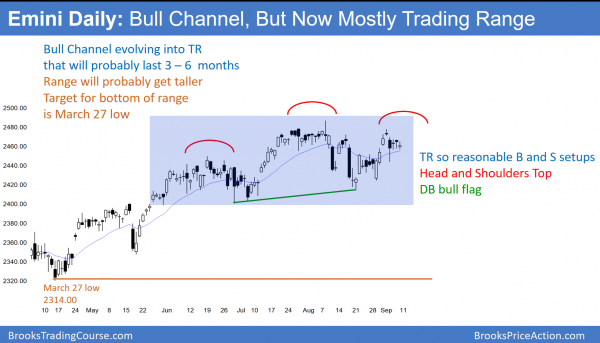 The daily S&P500 Emini futures candlestick chart is in a broad bull channel. However, it has also been in a trading range for 3 months. There is therefore also a sell setup. Here, there is a lower high major trend reversal. It is also a head and shoulders top.

The daily S&P500 Emini futures candlestick chart has been sideways for 3 months. Several central banks are making interest rate announcements this month and the Emini might be waiting before breaking out.

Whenever a chart is in a trading range, there is always both a reasonable buy and sell setup. The bulls have a broad bull channel. In addition, last week’s rally was strong enough to make at least a small 2nd leg up likely. That would be a 3rd push up from the August low and therefore a wedge rally.

The bulls need a strong breakout above the September 1 major lower high. Without that, the odds are that the 3 month range will continue. Furthermore, even if they get the breakout, the rally has been in a broad bull channel since March. Consequently, the bulls are taking profits above prior highs. Furthermore, the bears have been making money by selling above prior highs. As a result, the odds are that there will be sellers above the September 1 high and the all time high. In addition, because the weekly and monthly charts have buy climaxes, the odds of a strong rally far above the high are small over the next several weeks.

The rally from the August 21 low has been weak. Furthermore, the selloff down to that low was strong enough so that bears will sell the current rally. If the bears get a reversal from here, they will have a double top bear flag with the August 16 lower high. In addition, the top would be a lower high major trend reversal. Furthermore, it would be a head and shoulders top.

If the bulls break to a new high, the bears will sell the new high. They would then be trying to create a higher high major trend reversal.

Whether the bears get a reversal from above or below the August high is irrelevant. They simply want a break below the 3 month trading range and then a measured move down. That would be a test of the March low, which is the target for the bears on the weekly and monthly charts as well. If the Emini gets there over the next several months, the weekly and monthly bulls will probably buy. This would then probably create at least a 50% bounce. In addition, the result will probably be a trading range that lasts 6 – 12 months.

At that point, the Emini would be back in Breakout Mode. This means that there would be about a 50% chance of either a bull or bear breakout. In addition, the target would be a measured move, based on the height of the 6 month range.

What does all this mean?