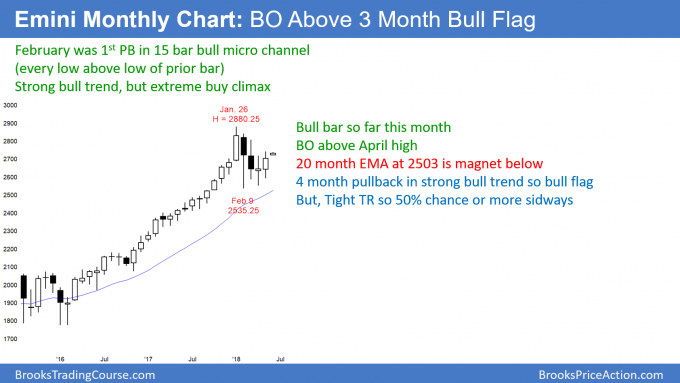 The monthly S&P500 Emini futures candlestick chart had a bull bar in May, but a prominent tail on top. It was a breakout above a 3 month bull flag.

The monthly S&P500 Emini futures candlestick chart has been sideways for 4 months after a 15 month buy climax. While May traded above April’s high, it closed below that high. This is a sign that the bulls might not yet be strong enough to test the January all-time high. It increases the chances of the trading range lasting longer before the bull trend resumes.

Furthermore, the monthly chart has not touched its moving average in a long time. Any support is a magnet. The 20 month EMA is now just above 2500, which is just below the bottom of the 4 month trading range.

Part of the reason for the lack of a strong bull breakout is that many bulls are beginning to wonder if the chart has to test this support zone. If enough do, there might not be enough buyers at the current price.

The Emini might have to drop to that support zone to find more buyers. If it does and then reverses up sharply, there will be a consensus that the bottom is in. That could lead to FOMO (Fear Of Missing Out) panic buying and a strong rally to a new high.

There is still an 80% chance that the 1st pullback in a 15 month bull micro channel will test the high before the bears can get a bear trend. The odds go up for the bears if they can make the trading range last 10 or more bars. Alternatively, if they can create consecutive very big bear trend bars, they then would have a 50% chance of at least a 20% correction. 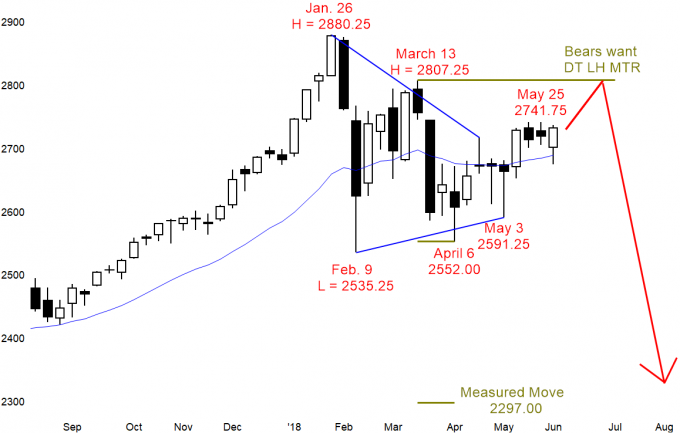 The weekly S&P500 Emini futures candlestick chart broke above a 3 month triangle 3 weeks ago. The past 3 weeks are more likely forming a bull flag than a failed breakout.

The weekly S&P500 Emini futures candlestick chart has had small bodies with prominent tails for the 3 weeks after breaking above a 3 month triangle. This lack of immediate follow-through buying is a sign that the bulls are not yet strongly in control. But, there is still a 60% chance that these 3 weeks are forming a bull flag.

However, if the bears can create consecutive big bear bars, they could make the bull breakout fail. That would lead to another test of the bottom of the 4 month trading range.

There is no significant resistance above this week’s high until around 2800. That is a Big Round Number and just below the March 13 high. Because there is no resistance below that, the Emini could quickly get vacuumed up there. However, if it turns down at that point, it will form a double top with the March 13 low. That would be an adequate test of the all-time high of 2880.25. Therefore, a selloff from there would have a 40% chance of a major reversal.

A major reversal in a bull trend is a bear trend. The neck line of the double top is the April 6 low of 2552.00. A measured move down from there is 2297, which would also be below the 20 month EMA. Furthermore, it would be a 20% correction.

While the weekly and daily charts would be in bear trends, the double top on the monthly chart would be too small to be major to be a major top. Consequently, the 20% selloff would still be minor. That means that it would form a bull flag and not a bear trend. 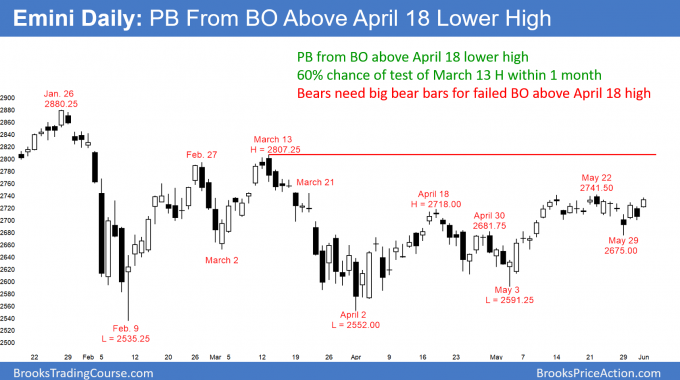 The daily S&P500 Emini futures candlestick chart has been in a tight trading range for 3 weeks. There is a 60% chance that there will be a bull breakout above this bull flag.

The daily S&P500 Emini futures candlestick chart has been sideways for 4 months. The May rally is strong enough to make at least slightly higher prices likely in June. But, legs in trading ranges are more likely to reverse than to lead to a successful breakout of the range. Therefore, as strongly bullish as the monthly chart is, the daily chart will continue to have 5 – 10 bar legs that reverse until it breaks out of the 4 month range.

In addition, whenever the bulls have a strong rally, like they did in early May, there is always at least a 40% chance of a an eventual successful breakout below the 4 month trading range.

The bears want at least one more leg down after February’s strong selloff. Their minimum target is a Leg 1 = Leg 2 measured move. The 1st leg down ended with the February 9 low. It is therefore about 350 points tall. If May 22 turns out to be the start of a 2nd leg down, the target would then be around 2400.

The bears see the trading range as a wedge bear flag after the February strong 1st leg down. The 1st leg up in the wedge bear flag is the March 27 high. April 18 was the 2nd top. May 22 was the final top. They know that the past 3 weeks are forming a bull flag. But they also know that there is a 40% chance of a bear breakout below a bull flag. If they can get that breakout and make it strong, there would be a 50% chance of a test of the bottom of the wedge. That is at either the April or May lows.

Do Treasury bonds and the dollar matter?

No, not if you are a trader. A trader trades the chart in front of him and does not worry about anything else. He knows that the institutions instantaneously price in all information, and there is nothing that he can know that is not already priced in. You always see traders on TV trying to impress viewers with their profound analysis of fundamentals. It is simply hubris and it makes them look dumb.

Yet, the bonds rallied strongly for the past couple of weeks. In addition, the Euro is at the end of a sell climax. All financial markets are related. These 2 are changing their behavior. That increases the chance of a breakout in the stock market. But only an arrogant fool will confidently predict the direction of the breakout based on his analysis of the news and other markets. The odds favor a new all-time high in the Emini before there is a bear trend. However, there is still a 40% chance of a bear breakout first.

I trade price action, not news. Therefore, I will wait for a breakout before switching from trading range trading to trend trading.

I like the news. It is entertaining and I like to know what is going on. However, I ignore it when placing trades. I wait to find out if more dollars see it as bullish or bearish and then trade.