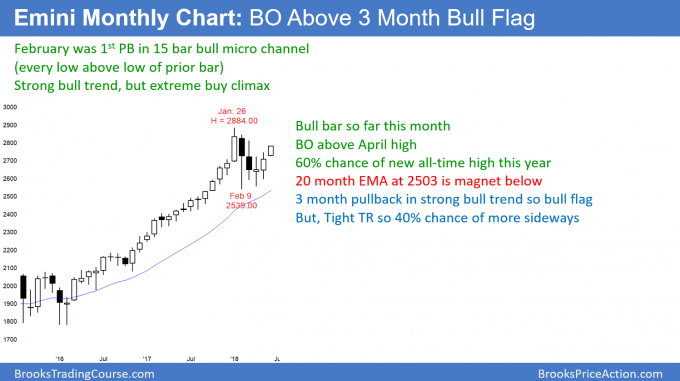 The monthly S&P500 Emini futures candlestick chart is breaking above a 3 month bull flag. This month so far is the 3rd consecutive bull trend bar.

The monthly S&P500 Emini futures candlestick chart is breaking above a 3 month bull flag in a strong bull trend. But, the bears want a double top after the 15 month buy climax. However, after a 15 month bull micro channel, there is a 70% chance of at least a new small new high before the bears can take control. This is true even if the Emini forms a lower high within the next few months and a break below the February low. Since 3,000 is a Big Round Number and just above the old high, that is a minimum goal over the next 3 – 6 months. 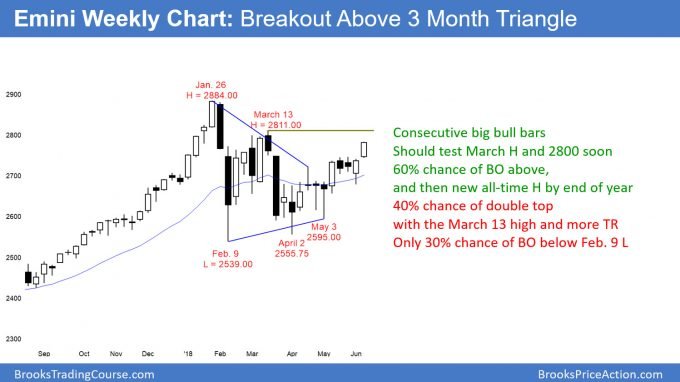 The weekly S&P500 Emini futures candlestick chart has rallied strongly for 2 weeks after pulling back from a breakout above a triangle. The odds are that the Emini will test the 2800 Big Round Number and the March 13 high within a few weeks.

The weekly S&P500 Emini futures candlestick chart has rallied from the May 3 low at the bottom of a 3 month triangle. Since the weekly chart was in a strong bull trend before the triangle formed, the odds favor bull trend resumption.

A breakout above a triangle often continues for a measured move up. Since the triangle is about 300 points tall, the current rally could reach 3100 – 3200 over the next 6 months.

The current trend on the weekly chart began in early 2016. It therefore was in effect for about 100 bars when the buy climax evolved into the triangle in February.

It is important to realize that a triangle late in a bull trend is usually the Final Bull Flag. This means that the breakout above the triangle usually reverses back down to the apex or bottom of the triangle. While the odds favor a rally over the next 6 months or so, there will then likely be a reversal back down to around 2600.

Traders should not lose sight of the fact that this rally will likely continue for at least 10% above the 2700 apex of the triangle. Therefore, traders should continue to look to buy over the next many months.

Even though the bull trend is resuming, the weekly chart is still in a 5 month trading range. Consequently, there is always a reasonable bear case. They want this rally to reverse down from a double top with the May 13 high. That would be a double top lower high major trend reversal.

If there is a strong reversal down, the bears would have a 40% chance of a swing down to the bottom of the triangle. In addition, there would be a 30% chance of a break below the February low and a 300 point measured move down to 2301.00.

The daily S&P500 Emini futures candlestick chart has rallied strongly since May 3. It might pause around the March 13 major lower high going into Wednesday’s FOMC announcement.

The daily S&P500 Emini futures candlestick chart has been in a bull trend since the May 3 low. Since the next resistance above the April 18 high is the March 13 high of 2811.00, the market is getting vacuumed up there quickly.

Because that is major resistance, the Emini will likely stall there or even pull back for a week or two. But, there is a 60% chance of a breakout above that high within the next couple of months. This is true even if there is a reversal back down to the May 29 low of 2678.75.

The Emini will probably rally to above 3,000 before the end of the year. However, 3,000 is not that much about the current price, and there are almost 7 months left to the year. Consequently, the Emini will probably spend a lot of time in 2 – 4 week pullbacks as it channels up to the target. Each pullback will look like the start of a bear trend. But, as long as the Emini continues to make major higher lows, the bull trend will still be in effect.

The most recent major higher low is the May 3 low of 2595.00. That is about 200 points below the current price. Traders must realize that there can therefore be very deep selloffs over the next 6 months in the bull channel. As long as the selloffs stay above the most recent major higher low, the bull trend is still intact. Therefore, the selloffs will be pullbacks and buying opportunities.

But, if there is a strong break below a major higher low, the bull trend will be over. The Emini would then be back in a trading range and possibly even a bear trend.