The monthly Emini candle closes in two weeks, and it is currently an outside doji candle that is testing the top of the bull trend channel.

The monthly S&P500 Emini chart continues to be overbought and it is at the top of the bull trend channel, but there is no sign of a top. 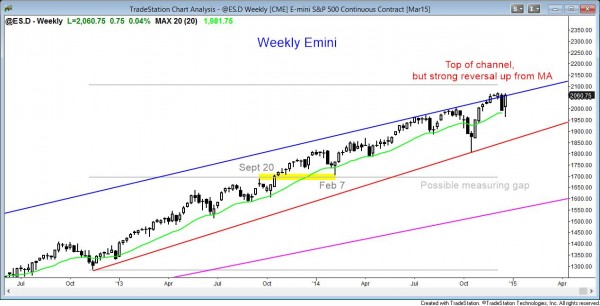 The weekly Emini chart reversed up strongly from a test of the moving average.

The weekly S&P500 Emini chart reversed up strongly from the moving average, but it is at the top of the bull trend channel. There is still a measured move target around 2100 from the gap below the February 7 low. The bears want a micro double top at the all-time high from earlier this month, and the bulls want a breakout and measured move up. This week’s reversal was so strong that a breakout above the December 5 high is more likely than a double top.

The daily Emini reversed up strongly from a test of the 100 day moving average and the breakout above the September high.

The daily S&P500 Emini chart reversed up strongly this week from the 100 day moving average and from a test below the September 5 high, which was the breakout point for the October and November rally. The bears want this week’s bull trend reversal to fail around the December 5 high and create a major trend reversal. They see this week’s rally as a buy vacuum test of resistance.

The bulls see this rally as a strong reversal up from a test of support. The bull trend reversal was strong enough to make the probability of a breakout to a new all-time high greater than that of a double top. However, if the Emini again enters a tight trading range here, like it did earlier this month, the probability can fall to around 50% for both the bulls and the bears. Since next week is Christmas week, which usually has protracted 5 minute tight trading ranges and small, trading range days, the odds of a strong breakout to a new all-time high next week are low. The Emini more likely will begin to get very quiet until after the New Year.

The bears need a credible top, which they do not have, or a strong bear breakout with follow-through. Until then, this reversal up has flipped the always in position back to long.