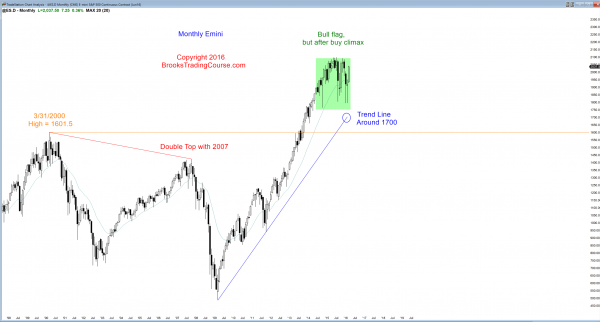 The monthly S&P500 Emini futures candlestick chart this month so far has a big bull trend bar, but the rally is still in the bull flag.

The monthly S&P500 Emini futures candlestick chart has rallied strongly for the past 2 months, but it is still in its 2 year bull flag. That bull flag formed after an unusually protracted buy climax, which reduced the chance of a bull breakout above the bull flag to less than the chance of a bear breakout below. The longer the trading range continues, the more the probability for the bulls increases. After around 20 – 30 bars, the probability for the bulls reaches that of the bears. If this trading range continues for a few more months, that will be the case. 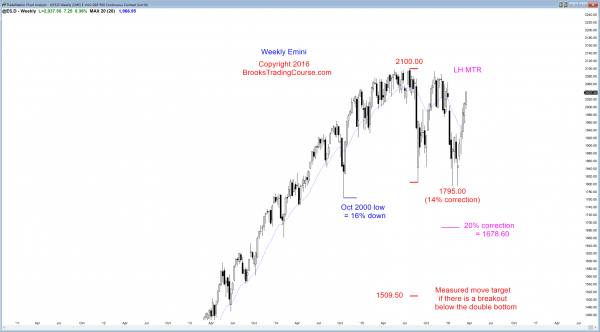 The weekly S&P500 Emini futures candlestick chart has rallied for 6 week’s, and the last 3 have been strong.

The weekly S&P500 Emini futures candlestick chart has had 6 consecutive bull trend bars. That is unusual and therefore climactic. By climactic, I mean that it is unsustainable and the odds are that it will end next week, which means that next Friday will probably close below the Monday open.

If next week is a big bear trend bar, that might be all that the Emini needs for the buyers to come back. If it is simply a small bear bar, the following week might reverse down. However, 6 consecutive bull trend bars represent strong buying. That means that bulls will be quick to buy the 1st reversal down.

Because the stop for the bulls is below the bottom of the bull breakout and that is now far away, institutions have only one tool to reduce their risk. They have to take reduce their position size, which means that they will probably begin to take partial profits next week.

When the bulls begin to sell, a pullback forms, like it did in December, 2014 and October, 2015. The pullback might only last a week or two, or it might last a couple of months. Since this rally has been so strong, bulls who need to add to their position will be eager to buy even a small pullback. Instead of a 100 point trading range beginning within the next few days, a tight trading range is more likely. On the weekly chart, a 40 – 60 point range is tight, and it might be similar to the one that formed in September, 2014.

The market can do anything at any time, and I am never surprised. Can this rally continue up for a 7th and 8th week? Of course, but there is a higher probability that it will begin to pull back next week simply because the weekly chart only rarely has 6 or 7 consecutive bull trend bars.

While this week or next week might end up as the high for the next couple of months, the best that the bears can reasonably hope to see over the next few weeks is a trading range. After that, they might have created enough selling pressure for a bigger reversal down, if the market is going to create one.

Over the past 2 months the daily S&P500 Emini futures candlestick chart has had a series of top attempts that were followed by strong bull breakouts. Every breakout is a buy climax, and when a market has 3 or more without much of a pullback, the odds are that it will soon have a TBTL Ten Bar, Two Legs, sideways to down correction. That will probably begin early next week. Because the bull channel has been so tight, the odds are that the correction will probably not fall far until after at least 5 or more bars. If it does form a tight trading range and there are strong bear bars in the range, those bear bars might provide enough selling pressure for the bears to get a deeper pullback over the next month. However, the bulls have been so willing to buy far above an average price (the moving average) that many will quickly buy any time the price gets close to the average price.

Even if the bears are able to turn the Emini down for ten or more bars, like it did after the October rally, the odds are that the bear reversal will be minor. This means that it would probably be a bear leg that was then followed by a trading range. This happened in early November.

It is always possible for the current rally to continue up to a new all-time high with no more than a 2 – 3 day pullback. However, that would be extremely unusual. A pullback over the next couple of weeks, which might grow into a trading range lasting a month or more, is more likely.

March/April is the strongest consecutive pair of months of the year. The last 2 weeks of March are usually up, in part because it is the end of the quarter and funds buy strong stocks so that their portfolios look good in the quarterly reports (window dressing). Calendar tendencies like this, however, are never reliable enough to be the basis for a trade.

Because the rally has been so strong, the probability of a bull breakout of the 2 year range is getting close to 50%. There are still lower highs and lows, and the monthly chart had an exceptional buy climax. The odds of a bear breakout before a bull breakout are still more than 50%, although no longer 60%.