You can either watch the video version, or look at the charts below and read the commentary. The two versions are similar, but not identical.

Please note that if you currently get the intraday updates, I will sometimes add to the update later in the day, but will not send out a second email. If you are interested, you can simply check the update again later that day to see this. When I do, I will put the new information at the top of the update, and I will also mention the time of the addition.

Yesterday’s close was below the lows of the past 6 weeks. The breakout and the context are strong enough to create a bear trend reversal on the daily Emini, S&P500, and all other major stock market averages. These markets are now always in short. All of the bulls who bought during these past 6 weeks are now trapped in losing positions, and they are hoping for any bounce so that they can exit with smaller losses. The bears who are not yet short are hoping for a bounce that will allow them to short at a higher price. This would reduce their potential risk (their stop is above either the big bear breakout bar or above the all-time high), and increase their profit compared to shorting at the current level.

What is different now? The current bear breakout is as strong as the one in April, which also followed a higher high major trend reversal, but resulted in only a 6 day pullback. However, the context now is better for the bears because the candles on the monthly chart are very far above the monthly moving average and have not touched that moving average in over two years. This is extremely unusual, and it is therefore climactic and doomed to end soon. The current reversal down is also from the top of the weekly channel in an extremely overbought market. When the rally attempt comes, it will probably be sold by both bulls and bears, and create a lower high major trend reversal, and it would then lead to another leg down.

Despite today’s bar being a doji, it had a bear body. Even though the bear body was small, traders look at it as a sign on strength for the bears and they see it as confirmation of the bear breakout. It increases the probability that the Emini daily candle chart will have at least two legs down and that the bear trend reversal will last at least 10 bars on the daily chart. Traders will sell 20 – 40 point rallies.

Emini bear breakout after a failed bull breakout above the channel 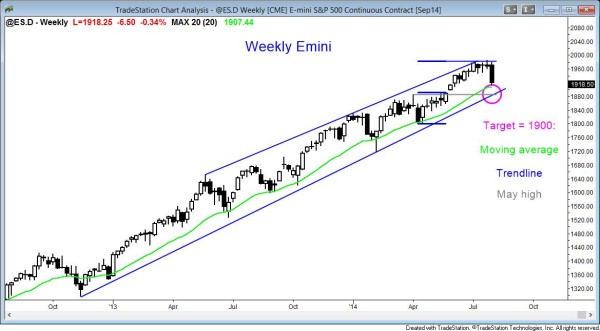 The Emini weekly chart is turning down from the top of the channel and should reach the bull trend line below 1900 at a minimum.

The Emini is at the top of the weekly channel and had a bear breakout below a weekly 10 bar microchannel. The bull trend resumed up for two candles on the weekly chart, and then reversed down this week. This is a common pattern and it usually leads to at least TBTL Ten Bars and Two Legs down. The bear breakout alone on the weekly chart is strong enough to have TBTLs down on that chart as well. This means that the selloff on the daily chart might last for two to four months, instead of just 10 bars or so. 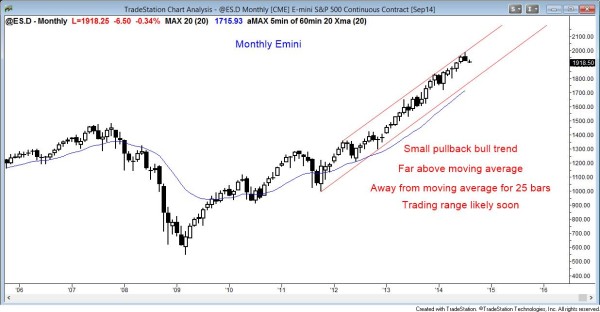 The monthly Emini chart had a bear reversal candle in July.

The monthly Emini and the stock market charts are in small pullback bull trends, which is a very strong type of trend. Bear reversals will probably only last a few bars and become bull flags. Since this is a monthly chart, a few bars is a few months. There is not yet enough selling pressure to create a bear trend on the monthly chart. The bears will probably need at least a double top. This means that the Emini will probably rally and test the all-time high after the current pullback ends over the next few months. The market might then enter a trading range and develop a higher chance of a reversal, but even then, the probably would be low until after the market creates enough selling pressure to form a major trend reversal followed by a bear breakout.

The other common way for a strong trend to reverse without a major trend reversal is through the formation of an endless pullback. Sometimes the pullback continues to grow to 20 or 30 bars and then finally has a strong bear breakout. The probability for the bears is higher if they wait for that strong breakout before shorting.