The Emini opened with a big gap down and then rallied. The rally had weak follow-through and it looks more like a bull leg in a trading range. Unless the bulls are able to create big consecutive bull trend bars, the odds are that there will be a bear leg that starts by the end of the 1st hour or two. The context is good for the bulls. However, they do not have a strong reversal up yet, and they might need a test back down and for a 2nd attempt at a base. The bears do not have a top. The Emini is Always In Long, but the rally is weak and just below the moving average. The odds are that it will be in a trading range for at least a couple of hours, and that there will be a lot of trading range price action today.

The Emini has been trying to bottom above the January low for the past 3 days, but it has failed. It is down 27 points now in the Globex session, which traded below the January low. The Globex session reversed up from just above 1800, and is 18 points above its low. The odds favored a bounce early this week, and then a break below the January low. The bounce was small, and the Emini is now testing the low. Since the 60 minute chart is so oversold, it might now find its bounce at or slightly below the January low. With the 60 minute and daily charts so oversold, the Emini might instead rally after testing the January low, instead of rallying first and then breaking strongly below. The February rally on the daily chart might be the Final Flag in the February selloff. If so, the 1st reasonable target for the bulls is the top of the bear flag at the February 1940 high, which was a 50% pullback of the January selloff. The result would create both a double bottom and a double top on the daily chart, and the Emini would be back to breakout mode. At the moment, the probability favors the bears, but if the Emini gets back to the bear flag, the probability would once again be about 50% for the bulls and the bears.

The bulls need a strong reversal up, and it can occur early or late on the daily chart. The strong reversal up can begin with a one or two day strong rally starting today or tomorrow. Alternatively, there can be a weak rally that lasts for a week or two and looks like a bear flag. The bulls can then get a strong bull breakout above bear flag.

With the Emini being so oversold, the odds that the bears will get their strong breakout below the January low over the next few days is lower, and the odds of a bounce are greater than 50%. If there is no strong breakout within the next 2 – 3 days, the odds shift in favor of a rally off the January lows. If the rally is weak, it would create a bear flag, which would have about a 50% chance of a bull or bear breakout. If it is strong, the rally would probably continue up to around the February high. Day traders should be ready for a surprising strong move up over the next few days. They obviously are prepared for a strong move down, but the less obvious possibility is a rally, and that creates a possible pain trade up, which could be much bigger than traders expect.

The EURUSD is testing resistance at the October 22 top of the sell climax in the daily chart, and at measured move targets. The rally over the past 2 weeks is a micro wedge on the daily chart, and a wedge top on the 60 minute chart. The bulls are starting to take profits and the bears are beginning to sell. The odds are that there will be at least a 2 legged pullback on the 240 minute chart starting today or tomorrow. The 60 minute chart is at its high, but it has been sideways for 5 hours in the European session. This is a good location for the bears, and the price action shows that the bulls are becoming less interested in buying at this level at this time. The odds are that the EURUSD will pull back about 200 pips down to the bottom of the 60 minute channel around 1.1100 over the next couple of weeks.

Less likely, the rally will continue up to the October 15 high at around 1.1500 without the pullback. 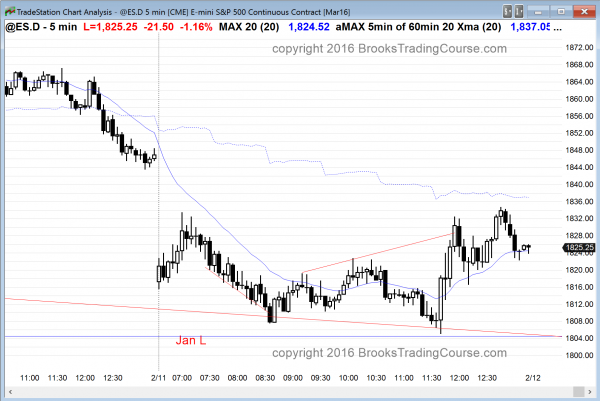 The Emini was in a trading range for the first 5 hours, and then reversed up sharply from a higher low major trend reversal after a few gap bars. The bull trend began just above the January low.

The reversal today was from just above the January low, which is important support, and from the 1800 round number. It created a bull reversal bar on the daily chart, but not a big one. Also, the strong rally had several pullbacks and did not get above the 60 minute moving average.

Just like all of the opportunities that the bulls had this week, they did not do as much as they could have with this one. It is enough of a reversal to lead to a rally for a week or two, but because of the bad follow-through on the 5 and 60 minute charts, and the small bar on the daily chart, the odds of a strong rally is less than it could have been. It is still very possible that this reversal will fail within a few days.

The bulls need strong follow-through buying. Otherwise, this short-covering will quickly be sold. The odds are that there will be follow-through buying over the next several days. If it is not strong, the bears will drive the Emini below the January low within a week or two.