Like yesterday, today began will small sideways bars with prominent tails. Limit order bulls and bears made money. This increases the chances for a lot of limit order, trading range price action today. While there will probably be a swing up and down, the odds are that the trend will not be especially strong, and there will probably be at least 2 hours of sideways price action.

The 1st 5 bars were bear bars, yet limit order bulls made money. This does not typically happen in strong bear trend days. It increases the chances that this initial selloff is a bear leg in what will be a trading range. The selling has been strong enough so that the 1st reversal up will probably be minor. The bulls want an opening reversal and an early low of the day. They need either a strong reversal up or a double bottom. The odds are that the Emini will be sideways for at least another hour or 2 until it gets closer to the moving average. Also, there still probably be a lot of trading range price action today.

I believe that the undecided Brexit vote is being careful, and careful voters will be logical, not emotional. The odds are therefore high that the UK will stay in the EU, and the vote will not be especially close.

However, I still think that it is most noteworthy that technical factors are more important than the news. First of all, the cash index all-time high is a magnet. This month’s rally got close enough so that the index might not be able to escape the pull. The Emini is in the middle of nested trading ranges. Consequently, the probability of a bull breakout or a bear breakout is 50%. There is also a 50% chance that the 1st breakout will reverse, either immediately or within a couple days of the news.

No one knows how much of the news has been factored in. It is entirely possible that too much or too little has been priced it. As a result, the stock market might have a violent move in the opposite direction of what is expected. While everyone is eager to trade, the chance of making money is higher if a trader is patient. Price is truth, and the market cannot hide where the billions of dollars are going. If most firms are buying, the market will go up. If they sell, it will go down. We will see it and then can trade it.

The Emini is up 20 points in the Globex session. This makes sense because traders are probably becoming confident that the UK will stay in the EU. That would remove some uncertainty and allow the Emini to do what it was trying to do. That is to follow the cash index as the cash index tests its high.

As with any big gap up, there is often a trend lasting for 5 – 10 bars on the open. If the trend is up, the Emini will be far above the average price. Hence, bulls will stop buying until it gets closer to the moving average. This usually happens after 1 – 2 hours of sideways to down trading.

A big trend down after a big gap up usually also soon go sideways. While about 20% of big day days become strong trends from the open, most spend at least 2 hours in a trading range. Consequently, later in the day, traders choose between trend resumption and trend reversal.

The UK is a small contributor to the world’s economy

The UK’s economy is 2% of the world’s GDP. A “no” vote might reduce that by 0.1%. How much will that reduce the price of stocks in the US? Not at all, at least not based on fundamentals. Hence, any big move would be technical. In conclusion, the big picture will not change. There is still a 50% chance of a new all-time high in the Emini. There is still a 40% chance it will fail and create a wedge top.

The odds favor trading range price action. However, there will be news coming out all day, like yesterday. As a result, there might be big moves up and down that reverse abruptly. A day trading tip is to not trade if the moves are too confusing or scary. 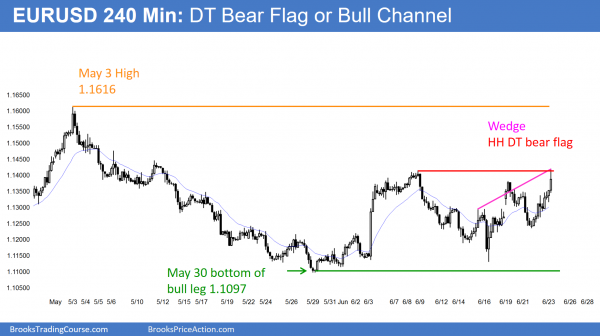 The EURUSD 240 minute Forex chart is rallying from a higher low major trend reversal. The current bar has a big tail, which means that the 5 minute chart is stalling at the June 9 lower high. A reversal down here would create a double top bear flag.

The EURUSD Forex chart has been in a tight trading range for 10 days. It is in breakout mode and it is waiting for tomorrow’s Brexit vote. Most noteworthy is that there will be news coming out all day today, as there was yesterday. There will probably be several 30 – 50 pip moves followed by abrupt reversals until the final result comes out during the European session on Friday. Consequently, traders have to be quick to take profits when there is a reversal. If the moves are upsetting, simply wait for them to get smaller and slower.

Most noteworthy is traders must be careful to not buy at the top or sell at the bottom of a strong breakout. They should only do that if the breakout is clearly far beyond all of the bars to the left. Most of all, it should have strong follow-through.

The big picture will not change. The UK contributes about 2% of the world’s economy. Even if their contribution drops 5%, that will not change their 2% contribution. Especially relevant is the appearance of the weekly and monthly charts. They are in breakout mode after an oversold bear trend. Most firms have already factored in the Brexit vote result. Yet, it is impossible to know in advance if most will buy or sell. Consequently, traders simply have to wait for the breakout.

As it becomes more clear that the UK will vote to stay in the EU, the Forex markets are getting back to technical trading. The EURUSD Forex market rallied 90 pip rally overnight. It is testing the June 9 lower high. The bears want a double top bear flag. The bulls want a breakout and a test of the May 3 high. While the UK will probably vote to stay in the EU, it is still possible for the EURUSD to sell off on the news.

Since the EURUSD is now at resistance and has stalled for 3 hours, it might stay sideways until the vote results come out tonight. If there is a strong breakout above the overnight high or a strong reversal down, traders will swing trade. They are now scalping. 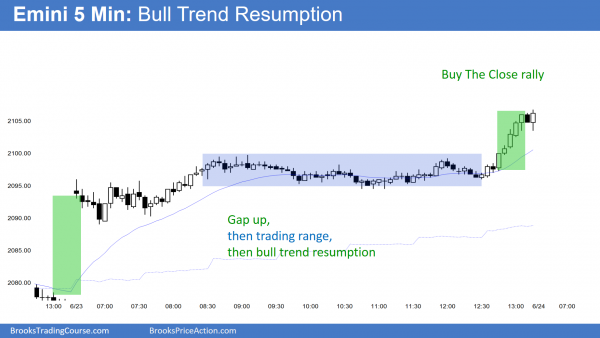 The first few bars showed that today was probably going to be mostly a trading range day, which it was. It had an attempt to get back to the open at the end of the day. Instead, it rallied to a new high and created a trend resumption day.

The Emini was a trading range day. The rally to the high of the early swing up was a measured move up from the low to the open, as often happens. After a late failure to get back down to the open, the Emini rallied into the close. The Brexit vote results come out tonight. While the odds are high that the UK will stay in the EU, it is less certain that there will be a rally tomorrow. The strong close and the nearness of the cash index all-time high favor a test of that high. Hence, there is now a 60% chance of testing that high, even if tomorrow sells off instead of rallying.

While the news makes it sound like there will be a big move in the markets tomorrow, there might not be. The news might already be so perfectly priced into the market that tomorrow is just an ordinary day.

Also, if there is a big move, it might be down instead of up. While the odds favor a rally, there is no guarantee. Hence, traders always have to be ready for the exact opposite of anything that is likely. If the Emini sells off tomorrow, it could sell off much further than traders think in a Pain Trade.

Finally, tomorrow is Friday and therefore weekly support and resistance are important. The most important prices are the high of the week and the all-time high. The bulls want a close on the high, and even a close at a new all-time high.