Today sold off below yesterday’s low on the open, but had bad follow-through. The bulls tried to create an expanding triangle bottom for a possible low of the day, and the bears wanted a strong breakout below yesterday’s low for a test of the 2068 area, which is the bottom of the final buy climax on Wednesday.

The bulls broke above the high of the day and the 5 and 60 minute moving averages. After 6 consecutive bull bars with several closing on their highs, the Emini is Always In Long. Because of the 3 day trading range, the bears might be able to create a leg down. However, the reversal up is strong enough that the odds favor a 2nd leg up, even if there is a deep pullback. The chance of a bear trend day is small. Today will probably be either a bull trend day or a trading range day, and traders will buy the first pullback, and possibly the 2nd one as well. The bears will need many bars to create enough selling pressure before traders will believe that they have taken control. This would probably take at least a couple of hours. With the reversal up this strong, the odds are against the bears for several hours and probably all day.

Last week, I said that the rally on Friday looked like a bull leg in a trading range than it did a resumption of Wednesday’s bull trend. The Globex candlestick chart is currently down 9 points. I also said the the bottom of Wednesday’s final strong buy climax would probably be tested before the bulls would be able to test the July lower highs. That final bull leg is at 2067.75, and the bulls might not be eager to buy again until the Emini gets to that level. It might reach it today or tomorrow.

If the bulls come back, their target is the July lower high of 2108.50. If they can rally there, the bears will be aggressive and try for a double top lower high major trend reversal on the daily chart. If they are successful, that can be the start of the move down to the monthly moving average, which is about 10% down from the all-time high.

The bulls want a successful breakout above the July lower high and then the all-time high. Because the monthly chart is so historically overbought (only once in the past 50 years has the monthly cash index stayed above its monthly 20 month EMA for more than 38 months, and it currently is in its 38 month), the odds of a rally lasting more than a month or two are small.

For online daytraders today, the Emini will gap down, but it is in its 3rd day of a trading range after Wednesday’s strong rally. This pullback will probably end today or tomorrow, and the bulls will then probably again rally strongly to test the 2108 area. Since today will open in the middle of the 2 day trading range, the odds favor more trading range price action today.

The range is big enough so that there will probably be at least one swing trade up or down. Because of the 2 day trading range, the swing will more likely be in a channel than a strong breakout. Traders might enter more with limit orders (betting reversal attempts will fail) than with stop orders (which they use when they are confident that a trend is strong). As always, if instead there is a strong breakout with follow-through up or down, swing traders will hold for a measured move, based on the height of the breakout.

The 240 minute chart of the EURUSD is in a high 2 (ABC) bull flag after testing the July high. The odds favor a rally today or tomorrow. The Euro is also forming 240 and 60 minute bull flags against the Yen and Pound.

The EURCAD 240 minute chart is in a broad bull channel and it is becoming parabolic. This is a buy climax, but there is no sign of a top yet, although it is testing the top of the trading range of the past year. It might successfully break out and rally for a measured move up, but reversals in trading ranges are much more common than successful breakouts.

The odds are that this breakout attempt will fail and that the EURUSD will trade down for several hundred pips over the next month or two. The rally on the daily chart from the April low is in a spike and channel bull trend. This increases the chances of a reversal down. The first downside target is around the middle of the channel.

The channel up began in May after the spike phase ended, and its bottom is around 1.3500. The midpoint of the channel is around 1.4000, and that is the target if this breakout attempt fails and the EURCAD begins to reverse down. There is no top yet, but the current rally is climactic and that increases the chances of a reversal down and reduces the chances of a successful bull breakout.

Those trading Forex markets for a living are watching it and the USDCAD for a top.

Traders learning how to trade the markets can see that the 60 minute chart of the USDJPY in in a double top bear flag. The 5 minute chart began to reverse down strongly a few minutes ago. The bears need a breakout below Friday’s low around 124.00 and then below last week’s low of 123.80. If so, they might get a leg 1 = leg 2 measured move down to the July low around 123.00. Forex day traders are shorting the 5 minute chart and expect follow-through selling today. 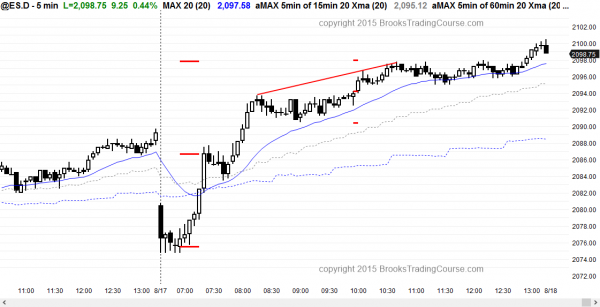 The Emini reversed up strongly from below yesterday’s low in an expanding triangle bottom. It spent the final 4 hours in tight trading ranges.

The bulls got a 2nd leg up today from Wednesday’s strong rally and the odds favor a test of the July lower highs tomorrow or Wednesday, which are about 10 points above. If the bulls can get above, they will probably get a new all-time high. The bears want a double top lower high major trend reversal on the 60 minute and daily charts.

It is possible that the Emini will test the bottom of last Wednesday’s final bull leg before testing higher, and that the past 3 days are just part of a big trading range after last week’s strong reversal up. Today is a possible double top with the August 10 lower high, and a wedge lower high with the 60 minute August 11 late rally and the August 13 high.

Today was an outside day within a 7 month trading range. That increases the chances that tomorrow will be an inside day. However, today’s strong reversal makes it more likely that the bull trend has resumed and that the Emini will test the July lower high this week and possibly tomorrow.

Most likely, both the bull and bears will be confused and disappointed and the trading range will continue, just as it has for 7 months. With the monthly chart so overbought, the odds favor a reversal down at some point this year. There is no sign that it has begun or is about to begin, and it is equally likely that the bulls will have a bull breakout above the 7 month trading range before the selloff begins.