The Emini opened above yesterday’s high, but immediately closed the gap. Because yesterday was a small day, the bears will try to trade below yesterday’s low to create an outside down day. The bulls see the tails below the 1st 3 bars and hope that the bears are weak. They therefore want the early selloff to reverse up and form an early low of the day.

At the moment, the Emini is barely Always In Long, even without bull bars. The bulls want an early test of the 2474.50 lower high. The bears want the reversal down. Until there is a strong breakout up or down, the odds favor a sideways open.

The Emini rallied for a couple of days after last week’s big bear breakout. However, the rally stalled yesterday and the bears got a bear body on the daily chart. Last week’s bear breakout was strong enough to make a test back down to last week’s low likely. Since the reversal up erased more than 50% of the selloff, the bulls might get one more new all-time high before the bears get their 2nd leg down.

Since the weekly chart is so extremely climactic, the odds are against much higher prices. Instead, the Emini will probably test to below the weekly moving average before going much higher. What traders do not know yet is whether the reversal down has begun. At the moment, it is more likely than not that it has. However, it could take a couple of months to get its 2nd leg down. That is what happened after the September 2016 strong bear breakout.

If instead the Emini rallies to a new high, there will probably be sellers up there. The odds are that the new high will fail and the bears will again create another reversal attempt.

The Emini has been mostly sideways for 2 days. This is because it is deciding between a lower high and one more new high. The odds slightly favor a lower high. However, the breakout from this current lower high can be up or down, and the probability is only slightly higher for the bears.

The Emini is up 5 points in the Globex market. Since the August 9 2474.50 high was the top of last week’s selloff, it is a major lower high. Hence, it is a magnet. The Emini is close enough so that it probably cannot resist the magnetic pull of that resistance level. Consequently, it will probably test that high today or tomorrow.

The bears want a reversal down from that high. They would see that as a double top lower high major trend reversal on the 240 minute chart. In addition, it would be a double top with yesterday’s high. The bulls want a strong break above the high. That would make a test of the all-time high likely.

Because the past 2 days have been in a trading range, the odds favor either a continuation of the range, or a failed breakout of the range. The rally on the daily over the past 2 days was strong enough so that the bears will need at least a micro double top. This means that the chance of a big bear trend day is probably small today. In addition, because last week’s low will probably be tested within a week or two, the odds of a strong bull trend day are also less. 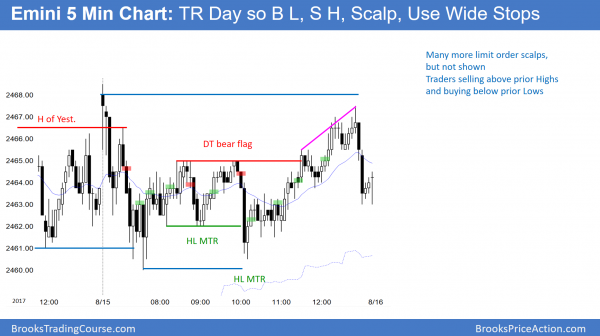 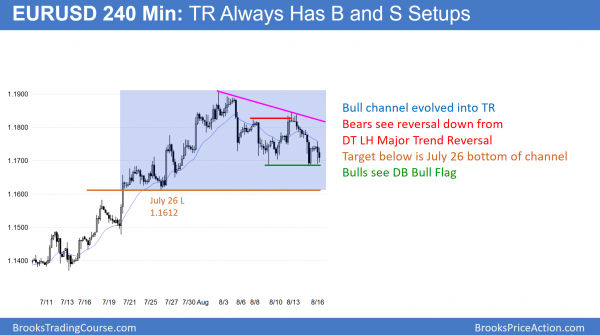 The daily chart of the EURUSD Forex market has been sideways for 3 weeks. It is testing its 20 day exponential moving average. While this is normally a buy setup, it is coming after a buy climax. Furthermore, the monthly chart is at resistance at the top of a 2 year trading range. Finally, the parabolic wedge rally began with the July 26 low, and that low is therefore a magnet. Consequently, the odds are slightly greater that the current pullback will test that low before breaking to a new high.

However, because the rally on the weekly chart is in a tight channel, even if the reversal continues down to the July 5 low, it will still more likely be simply a leg in a big trading range than the start of a bear trend.

The 5 minute chart has been in a 30 pip range for the past 5 hours. Furthermore, it is testing the bottom of the 3 week range. The location is good for the bulls. Yet, there is still a magnet below at the July 26 low. The odds still favor a test of that low. Therefore, day traders are ready to swing trade their shorts if there is a strong bear break below yesterday’s low.

In addition, because the 240 minute chart is at the bottom of a 3 week range, they will swing trade a strong reversal up, betting that the bull trend on the daily chart will resume. While they wait for a breakout up or down, they will continue to look for 10 pip scalps, betting that the trading range will continue, but knowing that it will probably breakout within the next week. 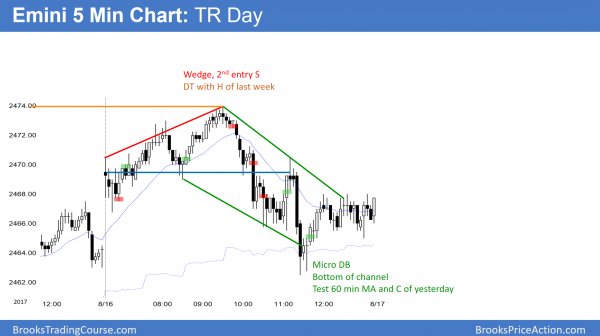 The Emini had a weak rally on the open, and tested last week’s top of the sell climax. It sold off to a new low, but reversed up from the low of 2 weeks ago, the 60 minute moving average,
yesterday’s close, and the bottom of the bear channel. It was a trading range day.

Yesterday’s bear body on the daily chart reduced the chances that this rally will make a new high. Hence, traders are looking to sell a lower high major trend reversal on the daily chart. Today is a sell signal bar for tomorrow. But, it was not a strong bear reversal bar. In addition the 4 day rally has been strong. Consequently, the bears will probably need at least a micro double top before they can take control. As a result, the odds favor sideways for at least a couple more day.