Today began with a trend from the open bear trend. The selloff was strong enough to make either a trading range day or a bear trend day likely. The odds are therefore against a bull trend day. Because the Emini has been in a tight trading range for a week, the odds are against a strong bear trend day. However, the 1st reversal up will probably be minor, even though it will be a 2nd reversal up from below yesterday’s low. Hence, bears will sell the 1st rally. If the resumption down breaks strongly to a new low, today will probably be a bear trend day. If instead the 1st rally is big, the odds will favor a trading range for the 1st hour or two, and then breakout mode.

Yesterday sold off strongly, but reversed up. It therefore was another trading range day in the 2 week trading range. In addition, that range is in the middle of a 2 month range. Because of the buy climaxes on the weekly chart and the lower highs on the daily chart, the odds are that a correction down to the December close started with the March 1 high.

Yet, the bears have failed to get follow-through selling after 2 strong bear days in the past few weeks. Consequently, the odds are that the Emini will test the March 15 lower high before the bears will try again.

The bulls need a strong breakout above that high to make the bears give up. Since the sell climaxes on the weekly chart are extreme, the probability is against much higher prices until the Emini falls below the weekly moving average. Hence, the bull case is weak over the next month, despite the bull trend on the daily and weekly charts.

The Emini is down 2 points in the Globex session. Yesterday reversed up strongly, but because the Emini has been in a tight channel for 3 days, the rally is just a leg in the trading range. Therefore the odds are that it is the start of a bull trend. This trading range is within a 2 month trading range. Furthermore, it is following an extreme buy climax that tested major support on the monthly chart. Consequently, the odds are slightly greater that the bears will get their breakout.

Hence, the Emini is in the early stage of a 5% correction. As a result, there will probably be a strong bear breakout below the March 27 low within a month. Furthermore, that breakout will probably be a measuring gap for a test down to the December close. Yet, until the bears get that breakout, the bulls still have close to a 50% chance of a bull breakout. However, because of the extreme buy climax that I discussed over the weekend, the odds are against much higher prices without a 5% pullback 1st.

Since the Emini is in a tight trading range and 5 of the past 7 days have been doji days, the odds favor another trading range day today. Yet, a breakout can come at any time. Because the bears have made 2 strong attempts to start a bear trend over the past month and both failed, the odds slightly favor a rally attempt to test last week’s high or the March 15 major lower high before the bears are successful. Hence, even though the odds are that the Emini is in a bear trend, it might have one more 1 – 3 day strong rally before the bears take control. 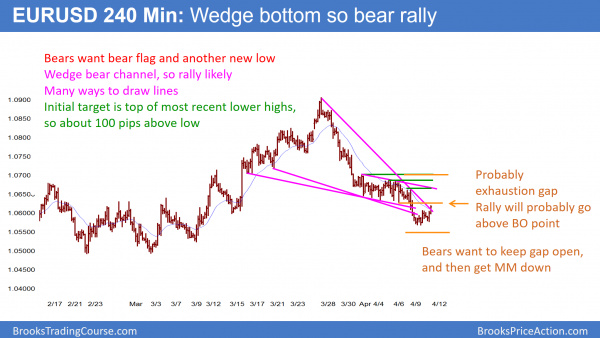 The EURUSD 240 minute Forex chart has rallied 50 pips above yesterday’s low. Yet, there is still a gap below last week’s tight trading range. After a wedge bottom, the odds are that the bulls will test one or more lower highs. Hence, they will get above the breakout point. Therefore, the gap will be an exhaustion gap.

The bears want the rally to stay below the bottom of last week’s trading range. They then want the bear trend to resume. Since there would then be a gap between the top of the rally and the bottom of the trading range, they would try to get at least a measured move down. Since the 2 week selloff is in a wedge and one more new low would just be another leg in the wedge, the odds are that bulls will buy any new low and the bear rally would start again at the new low.

Whether or not there is a new low, the odds are that the rally will be at least 100 pips. Since the selloff was about 300 pips and 50% pullbacks are common, the rally over the next couple of week’s will probably be at least 150 pips.

While the rally is not strong compared to the selloff, the context is good for the bulls. There is a wedge bottom that tested support in a 6 month trading range. The odds are that the rally will continue. This low is similar to the ones in November and February. In addition, the current rally will probably resemble the rallies that followed those lows. 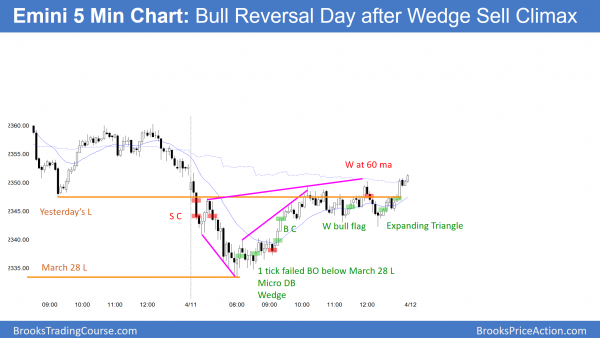 After consecutive sell climaxes and a wedge bottom, the Emini reversed up and formed another doji day.

Yesterday was the 6th doji day in the past 8 days on the daily chart. It is also a buy signal bar for at test of the March 15 major lower high.

Yet, the odds are that the Emini is in an early bear trend. Therefore, the rally will probably fail. Furthermore, the bears will probably get a break below the March 27 major higher low at some point within the next month. If so, traders will conclude that the Emini will test down to the December close.