The Emini began with overlapping bars and many reversals. This increases the chances of a trading range day, which was already likely. The Emini is in breakout mode. Traders are looking for a breakout with good follow-through in either direction, and then they will expect at least a measured move, based on the height of the opening range.

Since today is probably going to be a trading range day, whatever initial swing that develops will probably be a leg in a trading range. This means that there would then be an opposite leg after the swing lasts 2 – 3 hours. A trending trading range day is also possible. The breakout up or down might last for a few bars, and then the Emini would enter another trading range for an hour or two.

While it is possible that a trend day will develop, and day traders need to be prepared for one, the early trading and the context make a trading range day more likely.

At the moment, the Emini is still in a trend from the open bull trend, despite the trading range, but there is almost a 50% chance of a breakout below the low of the first bar and then a selloff to Friday’s high. The odds for the bulls are only slightly better than 50%. Traders want to see a breakout with follow-through before they will commit to a swing trade up or down.

My thoughts before the open: Candlestick analysis after a gap down

I mentioned yesterday that the most likely price action today after yesterday’s buy climax would be a pullback lasting at least a couple of hours. The pullback took place overnight. There was a bear breakout and the Globex 5 minute chart is now in its 3rd push down in a bear channel. This 3rd leg down is strong enough to make it likely that the bulls will need a base of at least 5 – 10 bars before they have a chance of a reversal on the Globex chart.

The Emini will probably gap down and it is currently below yesterday’s low. If it does gap down and if the gap stays open, this will make yesterday a one day island top. There have been many island tops and bottoms in the 7 month trading range. Gaps are common in trading ranges and are usually filled. They are signs of only brief strength, just like all of the brief strong legs up and down.

As strongly down as the 5 minute Globex chart is, the bulls see the price action as simply about a 50% pullback from the reversal up that began on Friday at the daily 200 day moving average. Trading ranges are filled will strong moves up and down, and lots of reversals from great candlestick patterns. Yesterday’s rally and the overnight selling are just 2 more examples. Neither has any predictive value. Until there is a breakout, there is no breakout. All of these moves mean nothing in the big picture. The trading range has no sign that is about to end, and traders will continue to bet that every strong move up and down will soon reverse.

So what is likely today? The day trading tip is to realize that the odds are that the Globex bears will be disappointed, just like yesterday’s bulls were disappointment. Disappointment means a trading range, and that is what is most likely today. There will almost certainly be at least one swing up or down, but the selling in the Globex market will confuse traders, and they will be less willing to hold positions very long. The result is that the odds favor smaller swings, and a trading range. There should be a swing buy or sell setup in the first hour that should create reasonable day trading for beginners.

Traders learning how to trade the markets should accept that a trading range has legs up and down, and either can occur first. Online day traders have to be open to follow-through selling on the gap down, or an immediate reversal up. In either case, the swing will probably be limited to an hour or two, and then day traders will look for a reversal.

Any day can become a big trend day. If today stays on either side of the moving average for 2 or more hours and it has only small pullbacks, day traders will then begin to accept that the day has become a trend day. Until then, they know that the odds favor a trading range in the middle of the rally that began Friday, and their intraday trading techniques will reflect that. 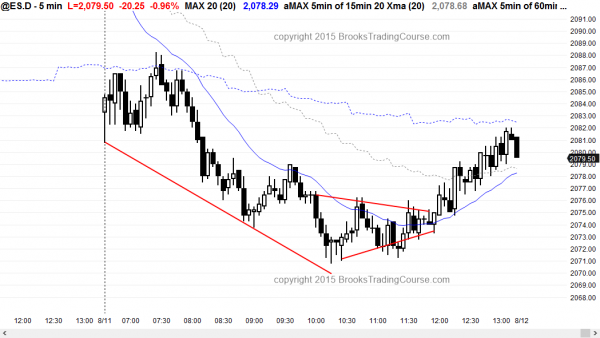 The Emini began in breakout mode with a trading range below the moving average. There was a bear breakout that was followed by a wedge bottom and then a higher low major trend reversal. The rally tested the bottom of the upper trading range.

Yesterday was a bull trend day and today was a bear trend day. Both were in the middle of a tight trading range on all higher time frames, and neither has predictive value. The 60 minute chart is forming an apex to its triangle of the past month, and the probability of a bull breakout is the same as for a bear breakout.

In overnight trading, the Euro was strong and the Yen and Canadian dollar were weak. The candlestick pattern on the EURUSD daily chart is triangle, the it has been rallying from the bottom over the past week. It is still below the July 27 lower high, which is the final lower high of the swing down to the bottom of the trading range. Until it rallies above a lower high, the bears can argue that the broad bear channel of the past 2 months is still intact.

Traders learning how to trade the markets should think of a bull channel as a bear flag. This would then be a bull breakout of a bear flag, and traders will then look at the breakout as a measuring gap. The measured move up would be about 200 pips, it the bulls are successful.

Last night’s rally on the 5 minute chart was in a spike and channel pattern. Those trading online can see that there is no top yet. The bull channel will probably evolve into a trading range before it can have a significant reversal. Until it reverses, day traders will swing trade their longs. Once the channel evolves into a trading range, they will scalp longs and shorts.

The 5 minute chart of the EURJPY is also in a spike and channel bull trend, and it is even stronger than the EURUSD. It has broken above the July lower highs and trading range, and it has a chance at a measured move up to the June high, which is 300 pips above.

The EURCAD is having a bull breakout of the 5 minute chart, and it is testing the July high. The breakout is strong enough to have follow-through after any pullback. The pullback should provide an opportunity for Forex trading for beginners.