The Emini opened with a big gap down to near the bottom of the 60 minute trading range. The bars had about twice the normal volume so the market clearly feels that this is an important location. It had an opening reversal down from just below yesterday’s low, but the follow-through after bear bars has been bad. That increases the chances that this trend from the open bear trend will be a bear leg in what will become a trading range. Since the channel down is tight, if there is a reversal up, the bulls will probably need a trading range for an hour or so to create enough buying pressure for a major trend reversal. Less likely, they will simply get a strong reversal up consisting of several consecutive big bull bars. The bears are in control, and they want the gap down to be a measuring gap and for the day to remain a bear trend day. Because the follow-through after each bear bar has been weak and the Emini is at the bottom of its 60 minute trading range, the bulls will be looking to buy a reversal up for a swing trade and a possible low of the day. The selloff has had several big bear bars, which is a consecutive sell climax pattern and it increases the chances of at least a small reversal up soon. With the channel as tight as it is, the first reversal up will probably be limited to a bull leg in a trading range. The bears will look to sell a lower high, especially near the moving average. The bulls will need a major trend reversal. Otherwise, traders will look at rallies as bear flags and they will sell them.

The Emini had a strong reversal down after a strong rally yesterday. This usually leads to a measured move down because it is a variation of a failed double bottom. It is currently down 11 points in the Globex market, but it is still above the bottom of last week’s strong reversal up. Most likely, this week’s selloff is just another strong leg within the 7 month trading range and it will reverse up today or tomorrow. However, the monthly chart is running out of time, and the odds are about 80% that there will be at least a 10% correction beginning within the next few months. One of these bear breakout attempts will soon succeed, but most will still fail. When there is a big gap, the odds of a trend day are higher. Since this gap down is near the bottom of the trading range, the odds of a reversal up are higher than the odds of a bear trend day. However, there is often an hour or two of follow-through selling before the bulls are able to take control. Day traders will watch the early price action and look for candlestick patterns to buy or sell, but if there is no early rally, they will then watch extra closely for a candlestick pattern to buy after the initial follow-through selling. The momentum down favors the bears, but the location favors the bulls, and context (location) is usually more powerful.

The 240 minute chart of the EURUSD is turning up from another higher low after last week’s higher low major trend reversal. It is getting close to last week’s high, which is around the top of the 2 month trading range. Most trading range breakouts fail, and most major trend reversals result in big trading ranges instead of big, new, opposite trends. Even though the rally of the past month has had several strong bull legs, the odds are that it is still a bull leg in a trading range and not the start of a new bull trend. The bulls need a strong breakout above the range and then strong follow-through before those trading Forex markets for a living will believe that the bulls have taken control on the daily chart. The 5 minute chart rallied overnight, but it had 3 pushes up over the past 2 hours and is likely to pull back from this small wedge top. It is nested within a 60 minute wedge rally that is testing the July high. However, last night’s 3rd leg up int the 60 minute wedge rally contained 3 strong bull trend bars. This is enough buying pressure to make it more likely that the EURUSD will have to go more sideways before it can pullback. When there is a strong rally to resistance, like there is on the 60 minute chart, and it forms a topping pattern, the odds favor a pullback. Before traders will look for a reversal down, they want to see more selling pressure, which can form within a trading range. A strong rally with a reversal pattern at resistance is more likely to lead to a pullback into a bull flag than it is a bear trend. If the pullback lasts 20 or more bars, the bears then can create a reliable top. Until then, the best the bears can usually get is a trading range, and that is what is likely today, despite last night’s rally. The EURUSD 240 minute chart last night had a bull breakout above a bull channel. This has about a 70% chance of reversing back sideways to down to the bottom of the channel within about 5 bars. The 5 minute chart has been reversing down for the past 30 minutes, and the selling is strong enough to make at least a 2nd leg down likely. The daily USDCAD chart is in a buy climax. It tried to break above the month long triangle yesterday, but 50% of triangle breakouts fail. It reversed down over the past 2 hours with enough momentum for traders learning how to trade the markets to look for a swing trade down after any rally. 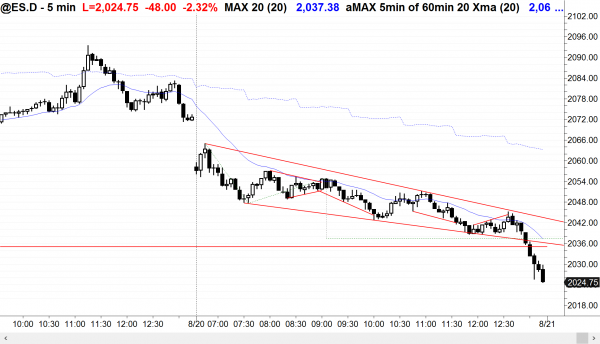 The Emini began with an opening reversal down from below yesterday’s low and traded down in a broad bear channel. In the final hour, the Emini had a weak reversal attempt up from a wedge bottom after falling below last week’s low and the bottom of the bear channel. The rally failed and today closed on its low.

Today began with unusually heavy volume on all of the 5 minute bars of the first hour, which was a sign that today could be an important day. Institutions were very eager to trade, and the bears won.
Not only was today a bear trend day, it fell below last week’s low and triggered the double top lower high major trend reversal (double top bear flag) on the daily chart. Last week was a strong bull reversal at the bottom of a bull flag. However, instead of a bull breakout, the Emini had a strong bear breakout. There is at least a 60% chance of a measured move down based on the double top bear flag.
Moreover, it broke below the lows of the past 5 months and is testing the bottom of the 7 month trading range. The bears need a couple of closes below the March low to confirm that the bear trend has begun. If they fail, then today’s selloff was just another sell vacuum test of the bottom of the trading range. Traders will be eager to buy a reversal up once they conclude that the bears are not strong enough to get the bear breakout.
The size of today’s bear trend bar was huge. With it closing below the lows of the past 80 bars (day’s) or so, the odds of this being the start of the bear trend on the daily chart are now better than 50%.
The cash index is more bearish. It closed below the 7 month trading range and it did so with a very big bear trend bar. The odds favor at least a measured move down based on the height of the 7 month trading.
The minimum target is a test below the 20 month exponential moving average, which is 1948 in the Emini. This would be about a 10% correction. There is a 50% chance that the bear trend will fall below the October low of 1790.25.
Traders will not know if this is the start of the bear trend on the daily chart until it has already fallen very far from the high. That is always the case when there is not a clear sell signal at the high. The Emini has been in a trading range for 7 months, and it has formed countless tops and bull flags. No knows for sure if a trend has begun until there is a strong breakout with follow-through. This is a better than average breakout, and it is occurring 38 months in the buy climax above monthly moving average. The odds are getting good for the bears, but they need follow-through over the next few days.