The Emini opened with a tight trading range within yesterday’s trading range. It initially was a limit order market, and this increased the chances for a lot of trading range price action before the FOMC announcement at 11 a.m. Day traders hope that there will be a breakout with follow-through in either direction so that they can make a swing trade. While waiting, day traders are buying below bars and selling above bars for scalps, and many are using wide stops and scaling in. Most traders wait for a breakout, or for a bull reversal near the bottom or a bear reversal near the top, which would allow a stop entry and a tight protective stop.

When the Emini opens just below yesterday’s high and close, the bulls usually try to test that resistance and break above. The bears look for a reversal down and an early high of the day.

At the moment, the Emini is Always In Long, but the bears are trying to create a major trend reversal. Even if the bulls get a breakout above yesterday’s high, the odds of a strong bull trend day are not high after 100 bars in a broad channel. Traders will look to sell reversals, knowing that the odds are that the bull channel will be replaced by a trading range this morning. If the bulls are able to create a strong breakout, traders will trade the day like a strong bull trend day, but it is more likely that traders will look to sell rallies, expecting a trading range soon.

The FOMC meeting is the most unusual one in over a decade. I don’t ever remember a time in my 28 years as a trader when the Fed went this many years without changing interest rates. This means that what will follow today is without precedent. That lack of clarity has the potential to create a big swing as the market probes for value. The day trading tip is that a swing trader usually has a better chance of making a profit trade if he waits at least 10 minutes before entering. This is because the breakout can be very big and very fast, but it will have a 50% chance of reversing in the first 10 minutes.

The Emini usually trades like any other day for at least the first few hours, but then tends to enter a tight trading range going into the report. If it does, most traders should go flat and wait for the report.

The Emini triggered a buy signal on the weekly chart yesterday by going above the high of the strong bull reversal bar from 3 weeks ago. That was also the high of the double top on the daily chart. When there is a breakout above the top of a daily top, theoretically bears buy back their shorts. About 50% of the time, the move continues for a swing up, usually for some kind of measured move. The other 50% of the time results in a failed breakout within a few days and another sell setup. Everyone sees the bull breakout. No one knows if it will succeed. There are clearly targets above. The most obvious one is the bottom of the 7 month trading range. When something is as obvious as that, those who trade futures markets for a living know that the price action trading strategy is to bet that it will not happen. This means that even if the bears will, the odds of the rally ending at 2030 are small. It is far more likely that it will end at least 20 point below or above that target. If the rally begins to turn down within a few points of 2030, it will probably be bought. This means that if the rally gets near 2030, it will probably go up to 2050 or even the all-time high.

The selloff was strong enough to make a major trend reversal attempt likely. The reversal can come from any level, even from a higher high. Most major trend reversal setups only have a 40% chance of leading to a swing down. This means that traders looking for the earliest entry might be stopped out once or twice before the swing down begins. However, the odds still favor the swing down, even if there is a new all-time high first. The probability is always greater when a trader waits for the strong bear breakout, but the stop is further away.

No matter what a bear chooses to do, the odds are still against bulls looking to buy for the long-term. At this point, they should wait to buy near the October low, even if that means they watch a rally to a new high first. If the market breaks strongly to a new all time high and has strong follow-through buying, they can buy higher, but the math is still better for long term investors to wait to buy a pullback when there is a buy climax on the monthly chart.

Although the Yen has been weak for the past couple of days, both the 60 minute chart of the EURJPY and the USDJPY are in their 3rd pushes up, and their channels are wedges. The EURJPY is stronger and is trying to break above a head and shoulders bottom on the 240 minute chart. However, it is still in the middle of a 5 month trading range on the daily chart.

All Forex markets are in breakout mode on the daily charts. The Fed interest rate announcement will today at 11 a.m. PST will almost certainly result in a breakout up or down, or in both directions on the 5 minute chart. About half of the time, the breakout goes one way and then reverses and goes the other way. However, if the breakout is only 100 pips, it might not be big enough to create much of a breakout on the 60 minute and daily charts. T

he news has the potential to change the perception of the value of all Forex crosses for weeks or months, and it could lead to a breakout on the daily chart that could last for months. The problem is that markets have inertia and they tend to continue to do what they have been doing. The daily charts have been in trading ranges for many months. They clearly will breakout at some point, but despite how strong a reason for a breakout appears to be, 80% of these reasonable breakout attempts fail. That means that the breakouts that will begin today will probably fail, just like all prior attempts.

Eventually one will succeed and the trading ranges will be replaced by trends, but until there is a breakout, there is no breakout. Since this Fed announcement could change the policy of the past 5 years, it can change the perception of the value of the dollar for the next many months. This means it has a higher potential to create a breakout than most news events. Traders will not believe that the breakout will be likely to succeed until they see a strong breakout and follow-through for several days.

The result is that those who trade Forex markets for a living will view whatever big move that comes today with suspicion. They need to see follow-through over the next several days before they will become confident that the breakout will lead to a trend. Traders learning how to trade the markets should not get too committed to the direction of the breakout because they need to realize that even the strongest breakouts fail about 40% of the time. Traders need that follow-through. If they get it, the breakout then will have about a 60% chance of some kind of measured move in the direction of the breakout.

Since this is a possible breakout on the daily charts, the move could be several hundred pips. If there is a strong breakout, there is no reason to enter at the earliest opportunity. Entering later has a higher probability of a profitable trade. Traders who wait for that higher probability entry know that it comes with worse risk reward. The stop is further away, increasing risk, and there is less left to the move, reducing reward, but this is a reasonable trade-off. 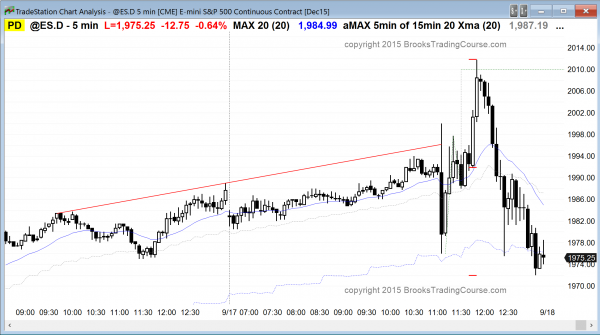 The Emini had multiple huge reversals after the FOMC announcement and became a big trading range day.

Although today’s candlestick pattern on the daily chart is a sell signal bar for a failed breakout about a double top, the probability of a swing down is low because the Emini is in the middle of a 3 week trading range. The probability in a trading range is always much greater for a continued range than for a breakout.

Tomorrow is Friday so weekly support and resistance are magnets. The most important price is the top of the bull reversal bar from 3 weeks ago at 1981.75, which is the top of the double top on the daily chart and near today’s close.