The Emini opened above yesterday’s high and then formed a small tight trading range. This was a trading range start and it reduced the chances of a strong trend day today. Traders need a strong breakout with follow-through to be comfortable with swing trading. Without that, they are more inclined to take quick profits and bet on breakouts failing.

At the moment, the Emini is always in short, but there is no clear bear trend yet. The selloff on the open had 2 bear bars followed by bull bars. The pullback from the bear breakout went 1 tick above the breakout point. Both of these things increase the chances that the selloff is more likely a bear leg in what will become a trading range than a bear leg in a bear trend day. This means that another trading range day is likely. It is still early and therefore still possible to evolve into a trend day in either direction, but until there is a strong breakout with strong follow-through, traders will assume that this is probably the early stage of a trading range day rather than a bear trend.

The bulls see this early selloff as a pullback from the breakout above the 2 day bear flag. However, there is enough selling so that the bulls will need a strong reversal up before they will be willing to swing trade from the long side.

My thoughts before the open: Breakout of a bull flag

The Emini had a strong reversal up last week, and the pullback of the past 2 days was a bull flag. It will probably gap up today, which would be a bull breakout of the bull flag. Last week’s rally was strong, but the breakout was not. Today is an attempt at creating follow-through buying. If this rally that is starting today again fails at the top of the trading range, the Emini might again test the bottom of the range.

The Emini is in breakout mode on the daily and 60 minute charts, and the breakout will probably be followed by a measured move. Since today is an attempt at bull trend resumption, there is a good chance of an attempt at a bull trend day today. However, that also increases the chances of a bear trend day because the bull breakout might fail. In either case, the odds for a trend and swing trading are good today. 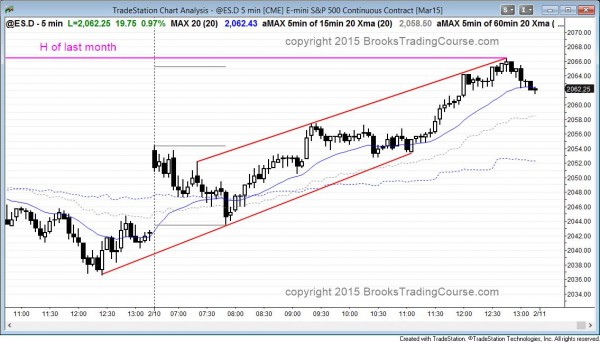 As I mentioned, today was likely to trend up or down, and it trended strongly up after an opening reversal test of yesterday’s close and all 3 moving averages. The high of the day was at last month’s high and just above a measured move up from the low of the day to the open of the day or the high of the first bar.

The Emini today was in a strong bull trend and ended with a series of buy climaxes. Although there is often an hour or two of follow-through buying on the next day, there is a 70% chance of at least a 2 hour sideways to down correction starting within the first tow hours. The Emini is again trying to breakout above the month long trading range and then above the all-time high. However, trading ranges are very resistant to breakouts and the odds are that the current one will fail, just as all of the earlier ones did. Since the trading range has lasted a long time, the odds of a breakout are increasing, but until there is a clear breakout, traders will be more inclined to bet on reversals.