The day began with several dojis and a limit order market, as it has for most of the days over the past couple of weeks. When that is the case, traders wait for a strong breakout up or down with follow-through before they will swing trade.

At the moment, the Emini is still Always In long from yesterday. There was not much selling pressure in the final 2 hours yesterday, and this reduces the chances of an early selloff without the market first going sideways to create some selling pressure. However, it could have a strong bear breakout at any time, even without first going sideways and creating a major trend reversal.

My thoughts before the open: Buy climax testing resistance

The Emini ended yesterday with a buy climax testing resistance. A buy climax at the end of the day often has follow-through buying in the first hour or two, but there is a 70% chance after that of at least a two hour, two legged sideways to down correction, and only a 30% chance of a rally without the correction.

Whenever there is a clear pattern, like the one that has been forming at the last 4 reversals, traders need to be prepared for the pattern to fail. If it does, the failure could lead to a strong breakout and bull trend, possibly reaching a measured move up. Because the Emini is so overbought on the monthly chart, any upside breakout will probably be limited and soon reverse down from a final flag reversal. 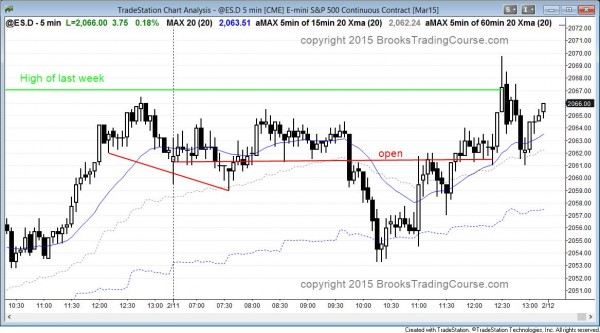 The Emini was in a trading range for 3 hours and then had a sell climax test of the 60 minute moving average. It reversed up sharply from a higher low major trend reversal. After a strong breakout to a new high, it closed near the open of the day and created a doji day.

There was a 70% chance of a 2 legged correction lasting at least 2 hours after yesterday’s buy climax. After the sell vacuum test of the 60 minute moving average, the Emini reversed up strongly.

The next target is the all-time high. The bears will try again for a top there, which would be a double top. The bulls want a measured move up after breaking above a week long trading range.

Today is a possible micro double top with Friday’s high. However, today is not a strong sell signal bar for the bears looking to sell below today’s low. This means that if tomorrow triggers the short below today’s low, many bears will wait to short until after they see a strong bear breakout. Today’s reversal up was strong enough so that the odds are that the Emini will test the all-time high, whether or not it pulls back tomorrow.