The Emini opened with a small bear bar just above yesterday’s 4 hour range. Until there is a strong breakout up or down, the odds favor a continuation of yesterday’s trading.

Since 4 of the past 5 days on the daily chart have been dojis, there is an increase chance of another doji bar again today. This means a trading range day is likely. The Emini usually spends the 1st hour deciding on the direction of the 1st leg. Trading range days either stay in a tight range, or have 2 – 3 hours swings up and down.

Yesterday sold off from just below last week’s high. Since last week was a big doji bar, the odds of an inside bar on the weekly chart are higher.

Because yesterday was a bear inside day after Friday’s new high, it is a sell signal bar for a failed breakout. However, there have been many reversal attempts this year. Since most reversal attempts fail, the odds are that this one will as well. Yet, with the daily, weekly, and monthly buy climaxes now being the most extreme in history, the odds favor a 5% correction beginning before the end of the year.

Breakout mode means a trading range. All trading ranges have both a reasonably buy setup and a reasonable sell setup. The probability of a successful bull breakout is about the same as for a bear breakout.

Since tomorrow’s FOMC announcement is an important catalyst, the odds are that the Emini will begin to enter Breakout Mode going into the event. This increases the chances of more trading range trading after yesterday’s 4 hour range. Because the daily chart is in a strong bull trend, the odds continue to favor higher prices. But, since the daily, weekly, and monthly charts have never all been this overbought before, the odds are that the Emini will soon pullback about 5%.

The Emini is up 4 points in the Globex market. The bulls see yesterday’s selloff as a bull flag after last week’s rally. The bears do not yet have a clear topping pattern, but will get one if yesterday’s 4 hour trading range continues today. 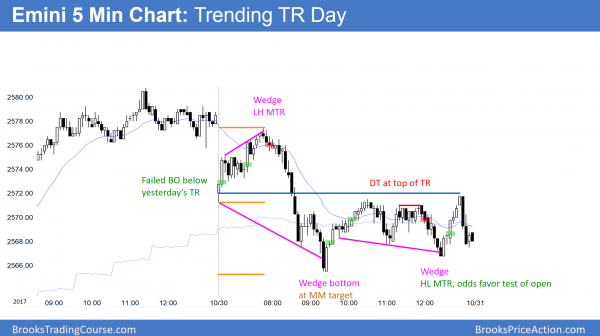 The EURUSD daily chart broke below a 3 month trading range, but yesterday was a bull bar. Furthermore, the weekly chart is testing its 20 week exponential moving average. The bulls want the daily breakout to fail and the weekly bull trend to resume. Yet, the daily selloff was strong enough to make at least a small 2nd leg down likely.

Since yesterday was a bull trend day on the daily chart, it is a buy signal bar today for a failed breakout below the neck line of a head and shoulders top. By falling below the October 6 major higher low, the daily chart is no longer in a bull trend. It is now both in a trading range and a bear trend. The bulls need a strong reversal up to return the chart to a bull trend. However, last week’s selloff was strong enough so that at least a small 2nd leg sideways to down is likely. Consequently, the best the bulls will probably get over the next few days is a minor reversal up.

The bears are disappointed by yesterday’s bull bar and by the pause at the weekly moving average. Yet, they know that they will probably get at least a small 2nd leg down. They also know that there is only a 40% chance of a 500 pip measured move down after the major reversal on the daily chart.

Trading likely for a few days

Because of the hesitation at the support of the bottom of the 3 month range and of the weekly moving average, the odds favor a few days of sideways trading. The bulls will try for a micro double bottom. That would create a buy signal. They would then see the October selloff as simply the 2nd leg down from the September 8 high. That would therefore be a High 2 bull flag.

If the bulls get a micro double bottom over the next few days, the bears want it to fail. The pattern would then be a micro double top and therefore a Low 2 bear flag. They want the bear trend to resume and continue down for a measured move down to the July 5 beginning of the bull channel.

The 5 minute chart has been in a 25 pip range overnight. Because of yesterday’s bull bar on the daily chart following last week’s bear breakout, the Emini is back to a temporary balance. The odds favor at least a few days in a tight trading range. At a minimum, it will probably continue at least until tomorrow’s FOMC announcement. 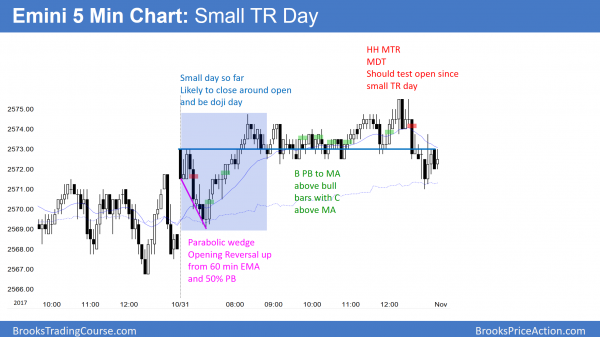 Today was a small day going into tomorrow FOMC announcement.

The Emini continued yesterday’s tight range today. Today was an ii on the daily chart. It is awaiting tomorrow’s FOMC announcement at 11 a.m. The extreme buy climaxes on the daily, weekly, and monthly charts make a 5% correction soon. However, a buy climax means the bull trend is strong. Therefore the odds are that all reversals will continue to fail, even though one will probably succeed in the next 2 months. The bears need consecutive big bear bars before traders will believe that the bears have a chance of a small correction.