Yesterday was the 3rd sideways day after last week’s reversal down. The bulls want the bull trend to resume up from a higher low. A gap up today would create a 3 day island bottom. That would probably mark the end of the pullback.

However, the bears triggered a weekly sell signal yesterday. Furthermore, the daily chart is overbought. In addition, the bears have a double top with the January high. But, the bull channel over since early July is tight and the weekly sell signal bar is weak. While the odds favor another 2 – 3 weeks of pulling back, they also favor a new all-time high within a couple of months. There is still a 30% chance of a 20% correction before a big breakout above the old high.

The Emini is deciding how big this pullback will be. At a minimum, the bears want a test of the August 2 buy climax low. Even if they get that, the odds still favor at least one more attempt at a new all-time high.

Because yesterday was a bull bar and the pattern is in a bull trend, it is an ioi bull flag. But, the location in the middle of the August range is bad for breakout traders. The odds favor lower prices. However, a gap up above the ioi this week would probably end the pullback. This is unlikely, but it would make a new high likely within a few weeks.

The Emini is down 15 points in the Globex market. It will therefore gap down on the 5 minute chart. If it trades below yesterday’s low, it would trigger another sell signal on the daily chart, based on the ioi.

A big gap down increases the chance of a trend day up or down. The bulls hope for a micro double bottom with Monday’s low on the daily chart. A bear trend day would be more likely. The next target for the bears is the August 2nd low, which is the bottom of the most recent buy climax on the daily chart.

When there is a big gap down, there is only a 20% chance of a strong trend from the open. Eighty percent of the time, the Emini enters a trading range for about an hour until it gets closer to the EMA. At that point, the bulls look for a double bottom or wedge bottom and the bears want a double top or wedge bear flag. Then, a swing is likely for at least a couple of hours. 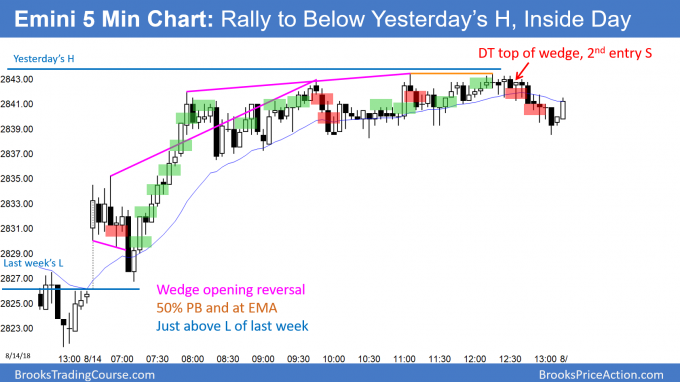 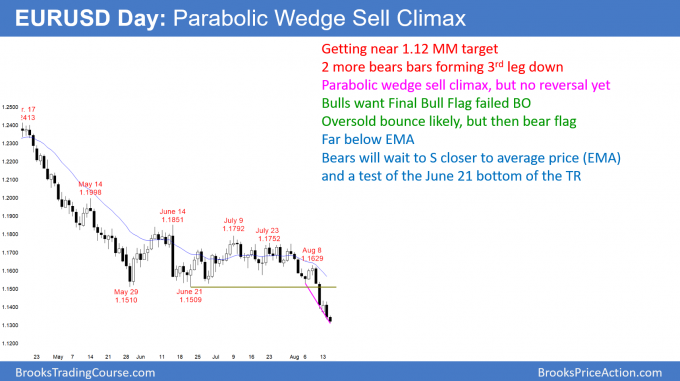 The EURUSD daily Forex chart fell again over the past 2 days. Since this is the 3rd leg down from over the past 8 days and it is in a tight bear channel, it is a parabolic wedge sell climax. There is room to the 1.12 measured move target, so a reversal up will probably form a bear flag.

So far, the EURUSD daily Forex chart has a bear trend day again today. This 2 day selloff after the bull day is a 3rd leg down in a tight bear channel. The selloff is therefore a parabolic wedge sell climax. There is no reversal yet and there is room to the 1.12 measured move target below. Consequently, there could be 1 -2 more small legs down before a reversal attempt.

Since there is a parabolic wedge sell climax on the daily chart, the bulls will probably get at least a 100 pip bounce over the next few days. Day traders will therefore look for a swing up. However, there might be a day or two of sideways trading 1st.

Since the selloff has been climactic, the bears will probably soon switch to scalping until there is a rally back up to resistance. The 1st target is Monday’s high, since Monday was a bull bar on the daily chart. 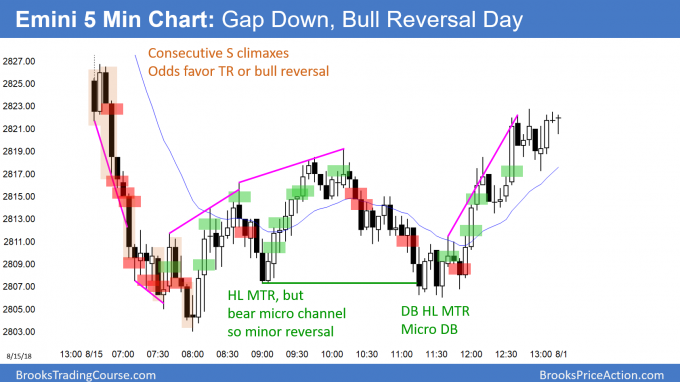 The Emini had a big gap down and then a Bear Trend From The Open. After a parabolic wedge sell climax, it rallied and closed above the midpoint. It is therefore a buy signal bar for tomorrow. If tomorrow gaps up and rallies, or just rallies strongly, the pullback on the daily chart will probably have ended. Without that, the odds still favor a test of the August 2 buy climax low.