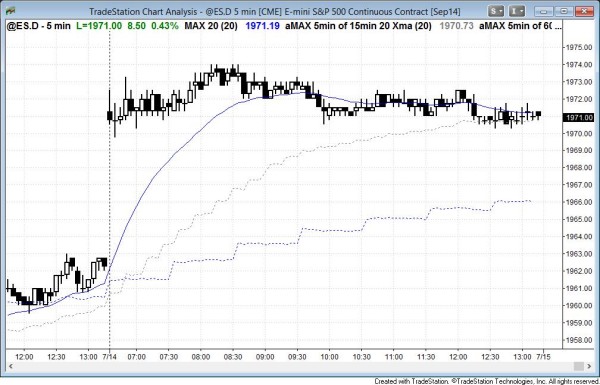 This chart was posted after the close. The Emini and stock market gapped up, but then entered a tight trading range for the rest of the day. The bulls want a breakout above the top of the 60 minute wedge top. The bears want a double top and then a bear breakout below the neckline. They then want a measured move down to the bottom of the wedge and to the breakout point on the daily chart, which are both around 1900.

Posted 8:06 am PST.
The most important price action in today’s Emini intraday report is the resumption of the bull trend on the weekly chart after last week’s reversal attempt. It is in a gap up bull trend at the moment.

The Emini opened with a big gap up, which usually is followed by an hour or two of sideways price action until the market gets closer to the moving average. Many traders then wait for a breakout in either direction and then take a swing trade.

The market was in a tight trading range for the 90 minutes, which usually reduces the extent of any move after the breakout. This makes a trend day with a big range less likely and it increases the chances of either a small trend day or a trading range day. The bulls want to get above last week’s high to trigger the weekly breakout pullback buy signal (last week is a high 1 buy setup). The bears want the tight trading range to be the final flag in the bull trend, and for the market to reverse down.

The range for the first 90 minutes was only 3.5 points and it should increase. It can do so by trending up, reversing down, or both. At the moment, the market is always in long and trying to trigger the weekly buy signal, but the chances for a big move up or down are limited unless the market has a strong breakout up or down or forms a small pullback trend. So far, there has not been a good trading opportunity. Traders should either be swinging a long or waiting for a breakout in either direction.

I posted this weekly chart of the Emini after the close. Last week was the first bar that fell below the low of a prior bar and was therefore the first bear breakout below a 10 bar bull microchannel. The channel on the weekly chart is so tight that the first move down will probably be bought. However, the market will probably work its way down to the bottom of the channel, which is around the breakout point on the daily chart, in the 1900 area.

I posted this daily chart of the Emini after the close. Both the daily and 60 minute charts have a wedge top, and it is at the top of the weekly channel. The initial goal is about 10 bars and two legs down to the bottom of the wedge, which is at 1917.50.

The weekly chart has a 10 bar bull microchannel, and last week was the first bar on the weekly chart that dropped below the low of a prior bar (the prior week’s low). However, the market has about a 2/3 chance of beginning a bigger pullback after a test of the top of the bull microchannel. This means that the market will usually rally for about 1 to 3 bars (weeks, since this is the weekly chart), and then have at least TBTL (Ten Bars, Two Legs) sideways to down. Bears with therefore be buying puts or put spreads above the top of the microchannel, or around 1980 – 2000 on the Emini.