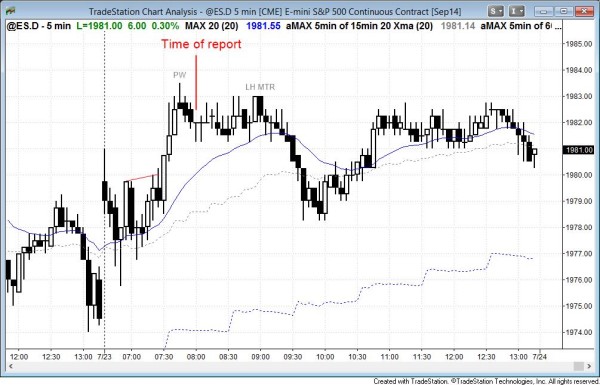 I posted this chart after the close. The bulls had a bull trend opening reversal at the moving average, but the market then had a parabolic wedge top at 7:45 am. This was followed by a small lower high major trend reversal. It formed as a small double top in a tight trading range, as is often the case. The day became a trading range day, but closed at a minor new all-time high.

Posted 7:58 am PST.
The most important price action in today’s intraday update is bull trend opening reversal at the moving average. Today’s first bar broke above yesterday’s high, and yesterday was the all-time high. The breakout failed and the Emini entered a tight trading range, setting up breakout mode trading. There are 60 minute measured move targets at 1982.25 and around 1888. Since they are resistance, they are magnets and might pull the market up before a top is reached on the daily chart.

The Emini and S&P500 had a bull trend opening reversal on a pullback to the moving average. The Emini reversed up to above the high of the day, but the rally to 7:45 had small bull trend bars, and the 7:40 bar had a tail and a close below the midpoint. This is a weak breakout. However, it is strong enough so that the market will probably have a second leg up. Since the breakout was weak, the pullback might be deep, and it might dip below the high of the breakout point, which was the 7:25 am high. The stop for the bulls is below the bottom of the bull breakout, which is the 7:30 low of the outside up bar.

The bears want this reversal down at 7:45 to be a parabolic wedge top and the high of the day, but the bull breakout was strong enough so it is more likely going to be a pullback that will be followed by a measured move up. Although this is an acceptable short for a possible high of the day, the probability for the bears will be higher if they wait for a strong reversal down, especially a breakout below the 7:30 low, before shorting.