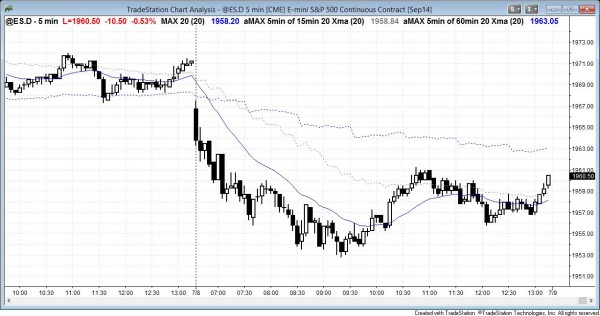 This chart was posted after the close. The stock market began with a bear leg in what was likely to become, and which became, a trading range, and this was followed by a higher low major trend reversal.

Posted 7:49 am PST.The key feature in today’s intraday report is the trend from the open bear trend with many reversal attempts, making the selloff likely a bear leg in a trading range. As I mentioned yesterday, the context is good for the bears. The stock market is at the top of the channel on the weekly chart and has a wedge top on the daily chart. Also, the strong seasonality ended last week.
At 7:10 am PST, the Emini formed a parabolic wedge bottom, but only 16 ticks below the 6:45 low (not 17 or 18 ticks below, where 4 point bears will buy back shorts), and there was still a measured move target below. This lowered the chance of this being a reversal. At this point, there is probably a 70% chance that the first bar will remain the high of the day, even if the market forms a bull channel for the rest of the day. After a parabolic wedge bottom, the market usually enters a bull channel or trading range lasting for hours.

At 7:40, the bulls had another reversal attempt. With this many reversal attempts, this is probably a bear leg in what will become a trading range for hours. The bulls need a major trend reversal before they get a swing buy. The market will probably be in a trading range for hours and then decide between trend reversal up and trend resumption down later in the day. This might be the low of the day and the market might enter a bull channel, but will probably need a major trend reversal before getting a swing buy.